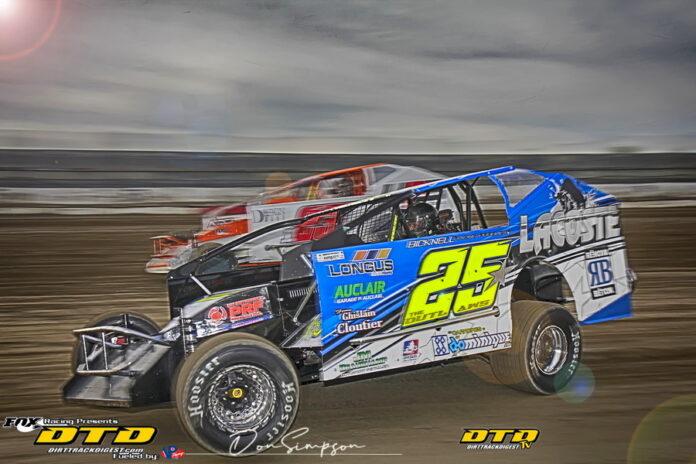 GRANBY, QUE – Autodrome Granby presented its annual Mr Modified Championship for the 33rd time in history on Friday night in the 358-Modified division. It was also the return of Raphaël Lessard, the former Kyle Busch Motorsports and GMS Motorsports Truck driver at the track for the second time of the year in the number 24 Modified. At the end of the 40-lap finale, The Outlaw Steve Bernier would be the class of the field in winning the prestigious title.

As the drivers were vying for the Mr Modified title, Steve Bernard (#54) and Steve Bernier (#25*) started on the front row the 40-lap event. The two drivers were extremely fast during the first laps to distance themselves from Michael Parent (#25P) who was running third. They were all running at full speed on a very tacky race track. While the leaders were in trafic, the race was stopped with a red flag as the car of Chantal Provencher (#36) rolled over on the backstretch after a contact with Francois Bernier (#49). On the restart, Steve Bernier took the lead in front of Bernard from the outside. The points leader, David Hebert (#ONE) struggled and fell back to the 9th place.

Even if Bernard gave everything he had in the last laps to get himself closer from Bernier, he was unable to try a significant move to get back in front. Bernier would go on to get a second consecutive feature win in Granby in front of Bernard and Parent. The defending champion Francois Bernier finished 4th as Mario Clair (#1) followed in 5th. Combining in second consecutive win to the 9th place effort of Hebert, it relaunches the fight for the championship with Bernier trailing Hebert by only 14 points.

Raphaël Lessard showed all his potential earlier on in the evening, getting the fast time during warmups. Then, on a very fast race track where overtaking drivers for position was hard for everyone, he was able to keep up with the pace. He his getting more and more comfortable driving a Modified with three dates left on his schedule until the end of the season in Granby.

The DIRTCar Pro Stocks were in action in a 30-lap feature event. Right from the get go, Yves Hamel (#194) gets out of shape in turn number 2 and brings with him almost half of the field. Bruno richard (#72) hit the wall really hard on the outside with Jonathan Lemay (#35) and Dany Voghel (#29) also suffering damages in the crash. Only Voghel would be able to continue. Jeffrey Lapalme (#88) was able to get the lead on the restart and was the leader until lap number 20 before seeing Jonathan Levesque (#32) getting by him on the inside in turns 3 and 4. Alain Brochu (#12) and Steve Chaput (#38) would follow suit. The race is then slowed down when Lapalme’s car losed his hood. On the restart, we got a good battle between Brochu and Levesque until the end of the race. The veteran driver Brochu would stay in front until the end of the race to get his second win of the season in Granby in front of a tenacious Levesque and another veteran, Bruno Cyr (#33). Lapalme and Chaput rounded out the top-5.

The DIRTCar Sportsman were also taking part in a 30-lap feature event. The division has been really competitive since the beginning of the season and it was the case once again on Friday night. Félix Roy (#91) and Moïse Pagé (#66) started on the first row after a pill inversion of positions. Pagé manages to take first place over Roy on the initial start. A neutralization tightens the field after a few laps and even though he was clearly on a left front puncture, Roy decided to stay on the track, which was not a really good decision. On the restart, William Racine (#35) took the 2nd place ahead of Roy. Pagé and Racine are very fast and they both get a good lead in front of the rest of the pack with the cars of Steve Turcotte (#29) and Samuel Charland (#41) getting closer in the Top-5. With 5 laps to go, a cautions goes out and melts away any lead that Pagé and Racine had. Unfortunately for Pagé, this restart is one too manyas Racine gets by him. William Racine leads the last laps to be the first driver to score 2 wins this season in the Sportsman division in Granby. Samuel Charland really put on a show with a great comeback from the 13th position to finish second in front of Pagé. Alexandre Salvas (#8) and Martin Lessard (#2x) rounded out the Top-5.

Autodrome Granby will hold one of his special events of the season on Tuesday night with the second night of big block Modified racing for the Canadian Championship. With the situation at the border, Canadian tracks are unable for a second year in a row to hold the usual Super DIRT Car Series events in July. Therefore, Drummond, Granby and Cornwall joined their forces to hold a mini three race championship for the big blocks starting on Monday July 19th.