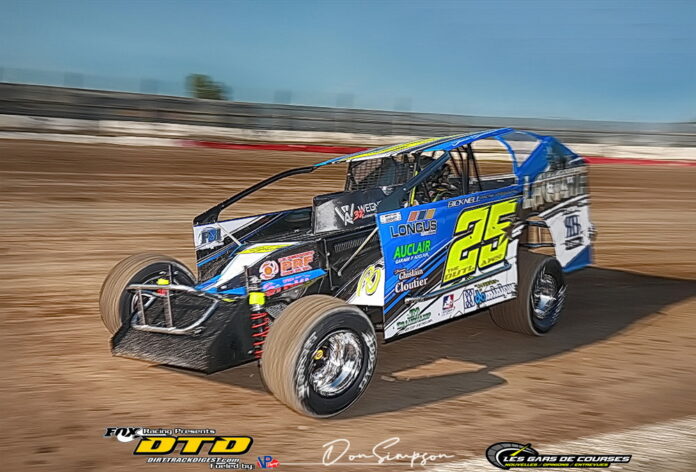 GRANBY, QUE – The Sportsman division was the headliner on Friday night at Autodrome Granby for the annual Mr Sportsman event. Drivers under 19 years of age were competing for the Medrick-Marion Cup. The 358-Modifieds, Mini Stocks and Pro-Stocks were also in action.

Moïse Pagé (#66) and Alexandre Salvas (#8) were sharing the first two positions for the start of the 40-lap Sportsman event. Pagé kept the first place on the first lap while Samuel Charland (#41) was able to get by Salvas for the 2nd place on lap number 6. Meanwhile, Steve Turcotte (#29) was on a mission and made his entry into the top 3 on lap 7. On the 9th circuit, a contact between Yannick Ledoux (#1) and Donovan Lussier (#00) sent the 00 askew and Félix Murray (#6) could not avoid contact and the 2 drivers saw their evening end in this way. Ledoux had to start from the back of the field. On a restart on lap 16, Steve Turcotte was able to go completely on the outside to get by Pagé. William Racine (#35r), who started 21st after winning the B-Mainafter mechanical problem earlier on, was involved in a great battle for 3rd place with Charland. Turcotte will lead the last laps to record a second victory this season and get the prestigious title of Mr. Sportsman 2021. At the same time, he was able to take the lead in the championship. Moïse Pagé finished 2nd while Samuel Charland took 3rd place. With his 4th place, William Racine won the 2nd stage of the Medrick Marion Cup. Alexandre Salvas rounded up the top 5.

358-Modifieds
The 358-Modifieds were also competing in a 40 lap event. From the get go, David Hébert (#ONE) took advantage of his 3rd starting position to take the early lead. On lap 5, the sky fell on Hebert’s head as his engine gave up. Yan Bilodeau (#23) then took the first place on the restart but François Bernier (#49) was able to get by in turn number one. Bernier had a rocket ship as he quickly takes a huge lead in front. Behind him, a great battle was taking place between Bilodeau, Yan Bussière (#21), Mathieu Boisvert (#73jr), Mario Clair (#1) and Luke Whitteker (#124) for 4th place behind Bernier, Steve Bernard (#54) and Steve Bernier (#25*). The 25* would then take the measure of Bernard and he was also able to get closer from his brother. He would eventually use a lap car as a pick to take the first place after an epic battle. Steve Bernier took the checkered flag for his third straight win in Granby ahead of his brother, Bernard, Clair and Whitteker.
Pro Stocks

The Pro-Stocks closed the evening with a 30-lap final. Pascal Payeur, who started out first, had to fight for many laps with Yves Hamel to keep his position. After a raise, Bruno Richard took the opportunity to slip into 2nd and after a few laps took the measure of Payer from the inside. Richard took the victory ahead of Payeur and Dany Voghel who had to work very hard to keep his 3rd place ahead of a fast Alain Brochu at the end of the race. Only 44 thousandths separated the 2 cars at the end of the race.

Autodrome Granby will hold another 40-laps affair next Friday with the cars using sail panels for the first time this year.