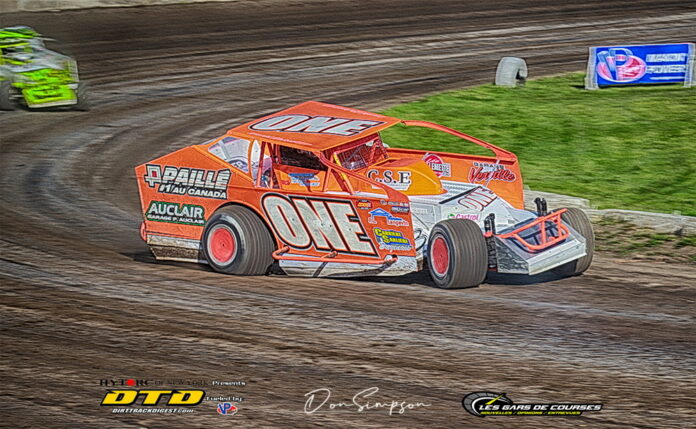 GRANBY, QC – Beautiful weather and warm temperatures greeted race teams and fans for the first ever races in the Restaurant Le Grinder Défi Québec-Ontario 358-Modified Challenge and Lussier Chevrolet/DRIVR Sportsman events. Drivers answered the call with 35 Modifieds and 47 Sportsman in the pit area!

Jeremy Roy and Corey Wheeler were on the front row of 75-lap 358-Modified feature event with Roy taking the lead, but caution came out with 1 lap completed as Yan Bilodeau slowed in front of the grandstand. Roy in the lead over Wheeler on the restart with Sebastien Gougeon in third. Joey Ladouceur brought a second caution on lap 12. An exciting restart as Wheeler took the lead with David Hebert moving up to second. Hebert used the inside lane and passed Wheeler on lap 17 and quickly pulled away from the field. Hebert pulled away from the field on the following green as Yan Bussiere moved in second. Hebert had the strongest car with Bussiere trying to keep up with the lead as the brother duo of Steve and Francois Bernier completed the top 4 at the halfway point. A good battle for the lead with Hebert and Bussiere with 25 laps to go as Bussiere took the outside lane and took the lead on lap 53. Steve Bernier was on the move passing Hebert for second and then he challenged Bussiere for the lead and passed the #21 car on lap 62. Hebert was back in contention as he passed Bussiere for second as Terrance brought caution with 8 laps to go. On the restart, Hebert had a great start and regained the lead with Alex Therrien now running in third spot. A caution came on lap 72, on the restart, a red flag was thrown as Claude Brouillard flipped in the backstretch, the driver was ok. Hebert made no errors on the final restart and took the first ever Défi Quebec-Ontario Challenge 358-Modified event over Bernier and Therrien.

Gabriel Cyr took the lead in the 40-lap Lussier Chevrolet/DRIVR feature over Mathieu Laramée and Gorden Clair. While Cyr was pulling was, a good battle for second between Clair and Laramée when caution came on lap 12 for Antoine Parent. Cyr had company with Laramée on the restart, Laramée had good momentum using the outside lane and took the lead on lap 15. Both drivers were still running side by side at the halfway point with Laramee having a slight edge. With 10 laps to go, the top 5 was running together as Cyr regained the lead with 8 laps to go. Yellow flag was out with 6 laps to go. Both Cyr and Laramée exchanged the lead when CD Beauchamp brought caution with 3 laps to go. On the same caution, Laramée stopped in the backstretch and lost his lead. Cyr to the lead as Sam Charland made a charge for third but hit the wall in the backstretch and caution was out on lap 38. Another caution came on lap 39 with the curfew, the race was deemed official with Cyr winning over Alex Lajoie and Gordon Clair completing the podium.

The next race will be held at Cornwall on July 17 with both divisions in action.

For more details on the series, please visit the Facebook page of the series under https://www.facebook.com/DefiQuebecOntarioChallenge or for more information on Autodrome Granby at www.autodromegranby.com