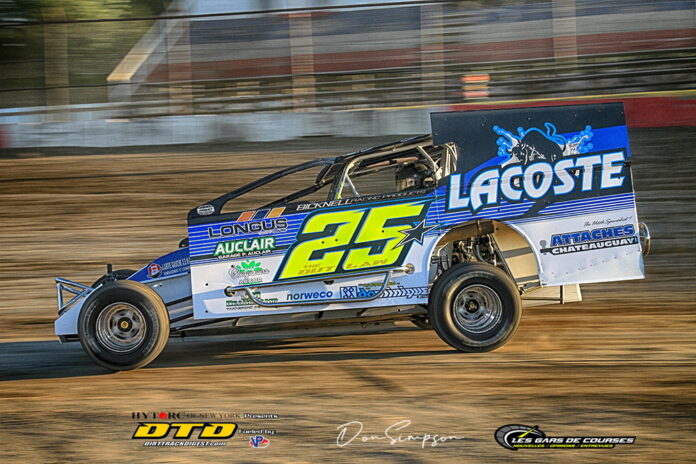 GRANBY, QC –  It was the first race of the Sail Panels Canadian Series for the modified in Autodrome Granby on Friday night. Sportsman, Pro-Stock, and Modlite were also on the card. Yan Bussière and his crew won the Pit Stop Challenge and he got the pole for the 40-lap feature.

Steve Bernier quickly took the lead in turn one. Michaël Parent is second and Martin Pelletier following . Bernier is in a class of his own as he takes a 6-second lead on Parent. Pelletier gets by Parent on lap 22 then 3 laps later, the 25p car of Parent comes to a stop in turn 4. Bernier will lead the 15 laps remaining to win his second consecutive race in Granby. Pelletier finished 2nd and David Hébert takes third place after starting from 12th position. Rookie Félix Roy gave another strong performance with a 6th place finish on a really technical track.

Donovan Lussier led all but 4 laps last week. Still, he got passed by his teammate William Racine and fellow competitor CD Beauchamp before the end of the race. This week, he got the job done as he wins his first-ever Sportsman feature. He kept his composure as veterans Alexandre Salvas and Yannick Ledoux challenged him in the closing laps. Pascal Payeur was in a class of his own on Friday as he took the lead on lap 4 and never looked back. He won the 25 laps feature in front of Yves Hamel and Bruno Cyr. Veteran driver Éric Désilets won the 20 laps Modlite feature. He took the lead on lap 2 and led the remaining of the race. Alex Forcier and Alex Daneau finished second and third