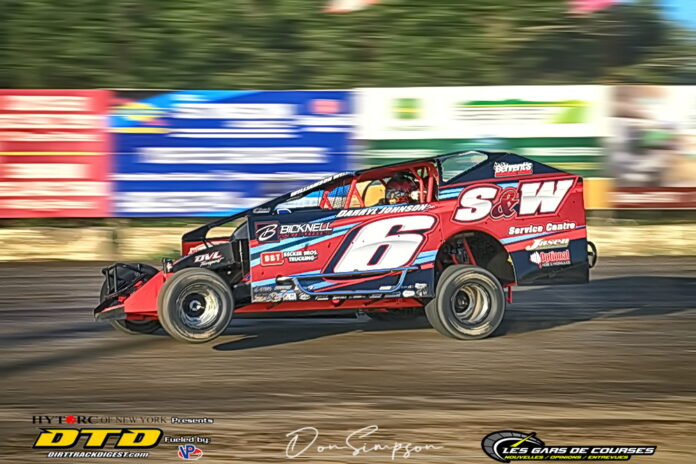 GRANBY, PQ – It was round two of the Canadian Big-Block Series in Autodrome Granby this Monday night, and once again the stands were packed for the big race.  The Québec crowd loves big-blocks and were not disappointed as Mat Williamson took the $5,000 victory.

François Bernier led the first 13 laps before Mathieu Desjardins passed him for the lead.

The driver of the NO. 37M car was the fastest on the track, keeping Bernier well behind him, with Carey Terrance being third behind them.

Desjardins stayed ahead even after several restarts.

On lap 64, Desjardins and Williamson were side-by-side on a restart, with Money Mat taking the lead.

Williamson led the remaining laps to win his first big-block race in Granby.

Terrance finished a strong second, with local racer Michaël Parent finishing in third place. He was second, but he was running on fumes and lost some speed, but still managed to finish third.

Bernier and David Hébert completed the top five after fighting for many laps for a top three.

With his seventh place finish, Luke Whitteker was the best small-block car.

Mathieu Voghell and Dominik Blais finished second and third as they both had to get back to the front after problems. Points leader Jérémie Goyette finished 4th in front of Jonathan Thibert. Karl Letendre leads the first three laps of

In the Sportsman feature, it was William Racine who took the lead with a pass on the outside.

Racine is the fastest car on the track, and after several restarts from cautions, he was able to keep his first place in front of Samuel Charland.

Cédric Gauvreau and Donovan Lussier were having a great race for the third spot, but with a late race, pass Lussier got ahead of Gauvreau for third place on lap 36.

With two to go, and another yellow put things on hold. With a green-white-checkered situation, Charland briefly takes the lead with a slide job, but Racine comes back in front and he is the first to cross the line in front of Charland, and with Gauvreau in third.