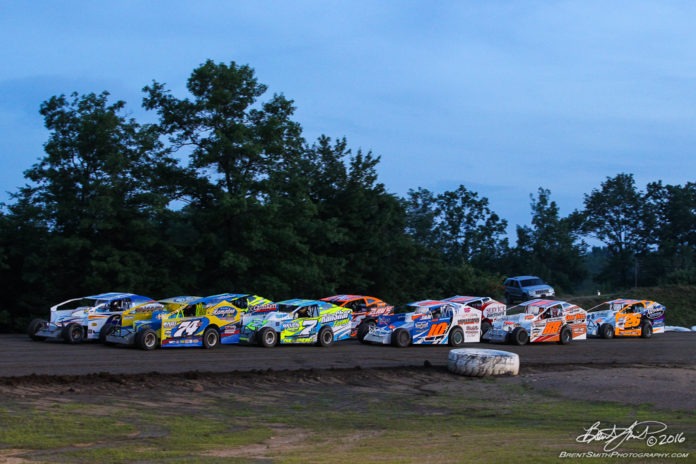 FORESTVILLE, PA – Sunny skies and temperature in the middle 60s greeted race fans at Big Diamond Speedway on Sunday afternoon as the track opened its gate for a practice session.

More than 70 race cars from all forms of dirt-track were pitside on Sunday afternoon for the first on-track action of the 2017 season.

Schaeffer’s MotorSports of Orwigsburg, will be the presenting sponsors of opening night which will see a four-division show headlined by the Steel & Metal Service Center 358 modifieds. The 30-lap feature pays $4,000 to win.


The gates open at 5:30 p.m. on Friday night with hot laps at 7:45 and racing gets underway at 8:15. Admission for the season opener is $20 for adults while kids 12-and-under are free. Active Military with a VALID ID are free.

Also on opening night, the U.S.S. Achey sportsman will race 20 laps for $1,000 to win while the Savage 61 roadrunners and the No Sweat Service Group street stocks round out the show.

A rain date of April 14 has been set aside for if needed.

The Money in the Mountains big block/small block challenge will take place on April 14. The 40-lap feature pays $6,000 and $400 to take the green with a rain date, if needed, of April 21. The race winner earns a guaranteed starting spot, a $500 value, for the Short Track Super Series event at the track on June 6.

Lisowski is moving up from the sportsman to the 358 modifieds division full-time this year as he was working on getting accustomed to the more powerful car.

“Obvisouly you are carrying a lot more speed in the 358 modified than the sportsman but it’s more about the start-stop speed. You get going a lot quicker and you stop a lot quicker,” he said. “We’re running on alcohol now and it’s a bit different, but it’s nice to get out and get a feel for the car.”

On April 28, the Capitol Renegade United Racing Company sprint car series will make the first of two appearances at the track as they open their wingless portion of the schedule that night. It’s the first wingless race for URC since 1990.

Two URC drivers, Joey Biasi and Billy Unglert, were on hand to shake down their non-wing sprint cars. It was the first time that Unglert has raced a sprint car without a wing.

“It’s interesting,” he said. “It like the car is slightly out of control most of the time.”

T.J Fitzpatrick, of Pottsville, is making the move from the roadrunner division to the sportsman this year.

“Every nut and bolt is important to these cars whereas with the roadrunners, you could get away with washing it, checking the bolts and oil and going out on the track,” he said. “It’s not the case with the sportsman. It was pretty neat in the first practice session. You get sucked back into these seats and it was exciting. It was what I was hoping it would be.”

Frank Porreca, of Honesdale, got his first taste of the 3/8th-mile oval on Sunday afternoon as he is debuting in the speedway’s 358 modified division this year.

“It’s definitely a whole different driving style coming from the sail-panel modifieds where we had a big, small-block engine so getting used to the smaller motor is a big difference,” he said. “The track seems fast and we’re looking forward to Friday night.”

Lee Allen, of Old Bridge, N.J., won the 50-lap Enduro Dash feature to cap off the practice day. Allen took the lead on lap 34 of the event and was never tested after that. Polesitter Chris Graver finished second while Chuck Eckert was third. Scott Lord and Jeremy Rock rounded out the top five.

Opening night sponsor Schaeffer’s MotorSports of Orwigsburg has been in business since 1967. and they offer a full-service motorcycle dealership to handle your off-road and street motorcycle needs. Schaeffer’s has been selling Harley-Davidson Motorcycles for 40 years and added KTM and Can-AM to their line in 2014. You can visit them online at schaffersmotorsports.com or call them at 570-968-4336.