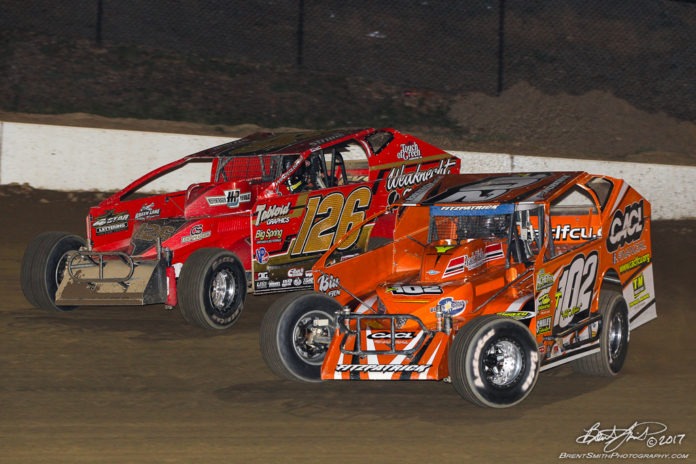 FORESTVILLE, PA – A beautiful spring night greeted a packed house at Big Diamond Speedway on Friday night after weather-related issues caused the 46th season opener to be postponed two weeks in a row.

The fans got more than their monies worth on Friday night as Jeff Strunk won the 30-lap, $4,000 Steel & Metal Service Center 358 modified feature to open the 2017 season as 91 cars were pit side.

This Friday, April 21, the Money in the Mountains big-block/small-block modified challenge takes place. The 40-lap feature pays $6,000; $400 to start and the winner earns a guaranteed starting spot in the Short Track Super Series event at the track, a $500 value, on June 6.


Also on the racing card next Friday will be the sportsman, roadrunners and street stocks.

Veteran Shawn Fitzpatrick led the 358 modified field to the first green of the year as he would maintain the lead for the first 12 laps before Strunk, who started fifth, would take the lead on a lap-12 restart when Fitzpatrick’s brother Tim spun and brought out the caution.

Stunk would check out on the field after the restart but it was Craig VonDohren making the big move as he came from 11th starting spot to fourth on lap 15 and then into second on lap 26 as he tracked down S. Fitzpatrick .

Stunk was able to maintain his lead even in lapped traffic to go on and score the opening-night win.

“We had a good car and a good starting spot tonight and it was a great team effort tonight,” Stunk said. “Hats off to Jake (Smulley, track promoter) for paying the good money here. We had a good track tonight and I’m looking forward to next week’s race.”

S. Fitzpatrick would hold off VonDohren at the line for second while Duane Howard and Ryan Watt rounded out the top five.

In the 20-lap, $1,000 to win sportsman feature, Mammana, who saw his race season end last year in May after losing two engines finally had some luck come his way as the long layoff didn’t seem to affect him as he led all 20 laps to score the opening night win.

“It feels good to get back here and what a way to start the season,” he said.

In the 20-lap roadrunner feature, Sites, who started 11th, used the outside line to his advantage to retake the lead on lap 17 as he went on to score the opening night win. He also won last year’s roadrunner season opener.

Mike Reichert paced the early part of the race and then battled with Steve Gromis for the top spot before Sites moved into the runner-up spot on lap 12. He would took the lead of the race one lap later.

“As the race went on the car got really fast as it was a little tight there in the beginning,” Sites said.

Gromis would hold on for second with Shawn Mulhall, Devin Trexler and Kris Ney rounding out the top five.

In the 20-lap street stock feature, Brennan III, in his 14th year of racing, was the third different leader of the feature as he took the point on lap 8 on the inside of Turn 4 as he drove under Chris Deer.

Deer had taken the lead on lap 5 when early race leader Jasen Geesaman dropped out with mechanical issues. Deer would meet the same fate on lap 12 while running second.

Eric Tripp would challenged Brennan III for the lead on a lap 17 restart but Brennan, the 2010 roadrunner champion, pulled away over the final two laps to record the opening night win.

“I knew when Eric got along side of me on the restart that he was going to give me a good run for the checkers and he raced me clean and it was a fun time,” Brennan said.

Tripp held on for second while Tyler Stump, Joey Brennan and Mike Radocha rounded out the top five.

The Money in the Mountains event pays $6,000 to win the 40-lap feature and $400 to take the green. The winner of the race earns a guaranteed starting spot in the June 6, Short Track Super Series event at the track, a $500 value.

Coming up on Steel & Metal Service Center Night on April 28 the United Racing Club continues its 70th anniversary season with the first wingless show of the year.