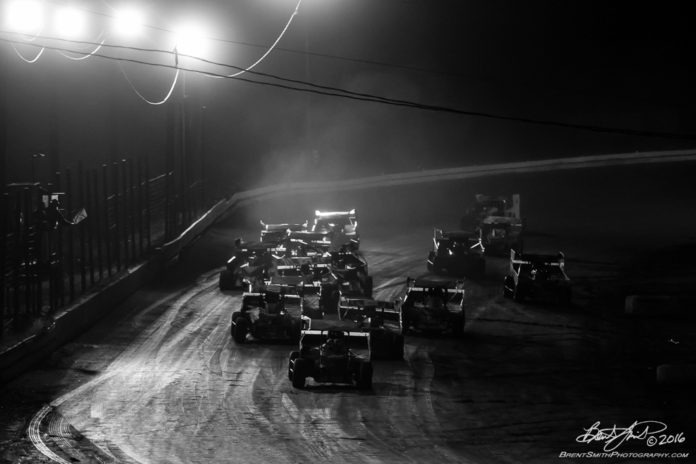 Two of the four scheduled features were in the books when the rain intensified at the conclusion of the 358 modified consolation event forcing the postponement of the modified features and the enduro on Red White and Blue Autos Night. The speedway wishes to thank the many hearty fans who came out and supported the track under threatening conditions.


With all of the qualifying events completed, the show is considered a full event.

Weather has played havoc with the early part of the 2017 schedule at Big Diamond as a late-season snowstorm and cold weather forced the opener to be pushed back while the track suffered its second rainout of the season on May 5.

This Friday, the American Racing Drivers Club midgets will make the first of two appearances at the speedway. They’ll be joined by the sportsman and their make-up feature along with the Savage 61, roadrunners, No Sweat Service Group street stocks and the vintage cars.

The midgets return on July 21

A stellar field of 30 358 modifieds were signed in the evenings race. It was the third straight event in which the 358 modified car car was at or more than 30 cars in the pits. Heat winners were Rick Laubach, Brett Kressley and Justin Grim while Kevin Albert won the consolation event.

Kody Sites continued his early-season winning streak in the 20-lap roadrunner feature as he claimed his third straight win in as many events to start the season.

Kris Ney would set the early pace but unfortunately for him, he would also bring out the first caution of the race when he slowed on the frontstretch at the start of lap 3.

Jim Kost, who was chasing down Ney for the race lead, took over the top spot when the caution came out. He would hold that spot on the restart through Turns 1 and 2 before Sites, who started ninth, took the lead away from him on the backstretch.

Sites would pull away from Kost, but by Lap 9, Kost was starting to reel in the leader.

Five laps later, Kost was close enough to try and race under Sites for the lead when Sites bobbled in Turn 2. Sites was able to gather his car and he maintain his lead going into Turn 3.

The yellow flag would fly three times over the final two laps setting up a one-lap dash to the checkers. Kost got a run going on Sites into Turn 1 on the final restart but Sites was able to pull away to go on to his third straight win.

Kost held on for second with Mike Reichert, Terry Kramer, Jr., and Devin Trexler rounding out the top five.

Jasen Geesaman won his first street stock feature of the year as he took the lead away from pole sitter Jeff Haag as the pair raced off of Turn 4 on the opening lap.

From there Gessaman was never challenged in the 20-lap feature as the race was slowed one time for a spin on lap 7.

Haag held on for second with with Chris Heller, Elvin Brennan III, and Chris Derr, rounding out the top five.