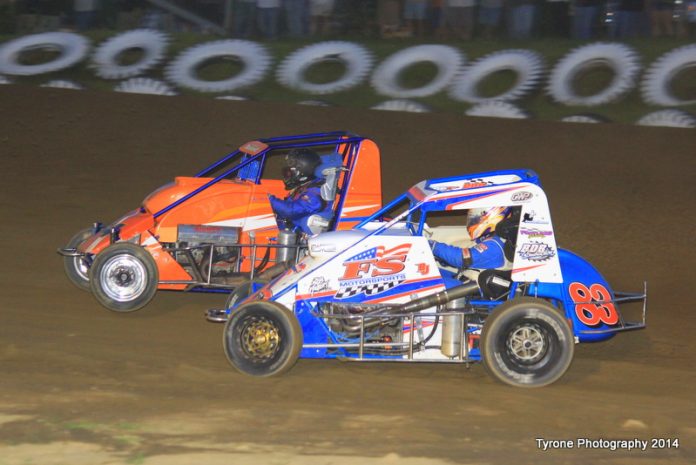 FORESTVILLE, PA – On the heals of a successful night of open-wheel racing from the United Racing Company sprint cars who went wingless for the first time ever at Big Diamond Speedway a few weeks ago, the wingless American Racing Drivers Club midgets will make the first of two appearances this year on Friday night.

This past Friday night Big Diamond was able to get most of the show in before the rains came just after qualifying had ended. With that, U.S.S. Achey sportsman will made up their feature on Friday in addition to their regularly schedule event. Also in action on Friday will be the Savage 61 roadrunners, No Sweat Service Group street stocks and the vintage cars.

The postponed Steel & Metal Service Centers 358 modified feature will be made up on June 9. Last week was the third straight night in which there were 30 or more 358 modifieds signed into the pits.


In two races last year at the track for ARDC, Brenden Bright topped his brother Alex in the July race while Brett Arndt made a last-lap pass of Trevor Kobylarz for the win on May 20.

This year, like most traveling series based on the east coast, ARDC has been plagued by rain as the club has raced just twice; April 29 at Susquehanna Speedway where Trevor Kobylarz won the feature and April 1 at Linda’s Speedway where A. Bright took home the win.

A. Bright, the current points leader is sitting on 19 career ARDC midgets wins. His next win will make him the 22nd person in club history to score 20 or more feature wins.

ARDC was formed in 1939 in the Frankford section of Philadelphia, six years after the National Football League Philadelphia Eagles were formed in the same part of the city. The club held is first race in 1940 and ARDC is the second oldest midget club in the world.

Mario Andretti, the 1969 Indianapolis 500 winner, made his mark with the club before gaining fame at Indianapolis. Other notables national midget drivers who raced with ARDC include Ron ‘Sleepy’ Trip, Pancho Carter and Mel Kenyon to name a few.

ARDC will return for their second date on July 21.

The twice postponed Money in the Mountains big block/small block combination show will take place on Friday, May 26 which will bring the Month of May to a close.