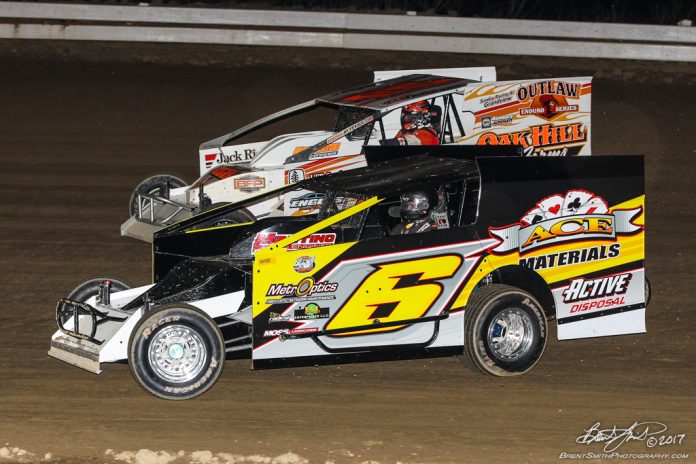 FORESTVILLE, PA – Matt Stangle is making a name for himself in the sportsman modified ranks in New Jersey and Pennsylvania.

The 17-year old who in his first full season of racing at Big Diamond Speedway in the U.S.S. Achey sportsman division scored his first career win at the the track on Friday night in the make-up feature and garnered a fifth-place finish in the regular feature as part of an exciting night of five features.

Other winners on Friday night included Mike Mammana who scored his second sportsman win of the year in the regularly schedule sportsman event while Brenden Birght won the ARDC midget feature. Jasen Geesaman scored the win in the No Sweat Service Group street stock feature and Mike Reichert won the Savage 61 roadrunner feature.

This coming Friday night, May 26, on the Slifko Service Center/Gone But Not Forgotten Memorial night, the much anticipated Money in the Mountains big block/small block modified combination event takes place with the 40-lap feature paying $6,000 to win. The event pays $400 to take the green and the winner earns a guaranteed starting spot in the June 6 Short Track Super Series event, a $500 value.

Also on the card will be the sportsman, roadrunners and street stocks.

Dave Dissinger appeared to be on his way back to victory lane in the make-up 20-lap sportsman feature from last week, but a broken steering box ended his night on lap 13 as he crashed into the frontstretch wall. He was OK. Dissinger had taken the lead on lap 3 of the race when he drove to the inside of early race leader Ken Eckert, Jr. in Turn 2.

Stangle, who started third, was running Dissinger down for several laps as the pair has put some distance between themselves and the the field.

Stangle would inherit the lead for the restart and would dominate the race over the remaining seven laps for his first career win at the track.

In the regularly scheduled 20-lap feature sportsman feature Mammana would take the lead from Kevin Brady on lap eight to go on to score his second win of the year.

Heats for the 28 sportsman were won by Eckert Jr., Nathan Moore and Charles Fayash. Kenny Bock won the consolation feature.

In the 20-lap ARDC midget feature, Brenden Bright would pull away to a staightaway lead over the first six laps of the feature only to have the pace slowed for a spin on lap 7.

Following a caution on lap 12, Bright would then have his hands full with Trevor Kobylarz on the restart.

Kobylarz, who started eight, moved to the inside of Bright in Turn 3 on the restart and was along side of the leader as they raced off of Turn 4. The pair would battle side-by-side through turns 1 and 2 before Bright pulled away down the backstretch to go on and score the win.

Kobylarz held on for second with Bret Arndt in third. Alex Bright and Ryan Greth, rounded out the top five.

Twin qualifying heats were won by Adam Piersen and Greth.

Kody Sites’ three-race roadrunner winning streak ended on Friday night as Mike Reichert led all 20 laps for his first win of the season.

Sites ran as high as third on several occasions in the feature but fell back and finished fifth.

Sixth through 10th were Shon Elk, Nate Hill, Jeremy Rock, Jim Kost, and Jon Schlauch. Heats for the roadrunners were won by Luke Arbogast and Reichert.

Jeff Hagg was well in control of the 20-lap street stock feature until mechanical issues dropped him out of the race on lap 13.

Jasen Geesaman would inherit the lead from that point and held off Eric Tripp over the final seven laps to score the win.

Heats for the street stocks were won by Haag and Kevin Heckman.

In the Blast From The Past Vintage Stock Car feature,