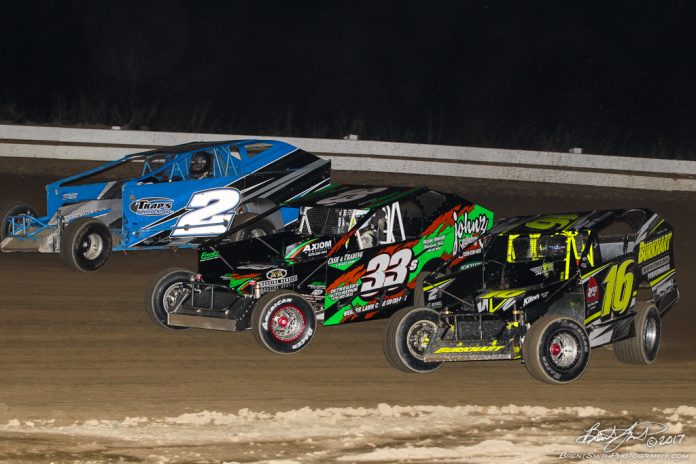 FORESTVILLE, PA – Thanks to mother nature, race fans are in for an action-packed month of June at Big Diamond Speedway.

Following Friday’s rainout of the Money in the Mountains big block/small block challenge, the race has be rescheduled for June 2. All wrist bands from Friday, May 26, will be accepted on June 2.

The gates will open at 5:30 p.m. on Friday with hot laps at 7:45 and racing gets underway at 8:15 on Slifko Service Center Night/Gone But Not Forgotten Memorial night. The 40-lap challenge feature pays $6,000 to win and $400 to take the green. The winner earns a guaranteed starting spot in the Short Track Super Series event at the track, a $500 value, on June 6.

Also on the racing card on Friday night will be the U.S.S. Achey sportsman, Savage 61 roadrunners and the No Sweat Service street stocks.

In all there will be six nights of racing at the 3/8th’s-mile oval in the coal region.


Then, four days later, the popular Short Track Super Series rolls into the track for a combined event between the North and South STSS tours. The 50-lap feature pays $5,000 to win. Also on the card will be the sportsman and roadrunners.

The roadrunners will take center stage on Friday, June 9, on Savage 61 Night with the Roadrunner Back Yard Brawl. The 25-lap feature pay $661 to win. Also on the card that night will be the Steel & Metal Service Centers 358 modifieds along with the sportsman and street stocks. The 358 make-up modified feature from May 12 will take place that night as well.

The sportsman, roadrunners and street stocks will make-up a three-division show on Friday, June 16 which will also see the return of the vintage cars and the Kim’s Kreations Mechanics Race.

The United Racing Club returns for its second and final appearance of the season on Friday, June 23, but this time with the wings on. Back on April 28, the club ran its first-ever wingless show at the speedway as Mark Bitner took the win.

Also on the racing card on June 16 will be the 358 modifieds, roadrunners and Enduro Dash 50.

The month of June conclude on Friday the 30th with Jasen’s Automotive Night/Street Stock Summer Shootout event as the street stocks race 30 laps for $1,081. The 358 modifieds, sportsman and roadrunners will also be on the card that night which carries a rain date of July 28.