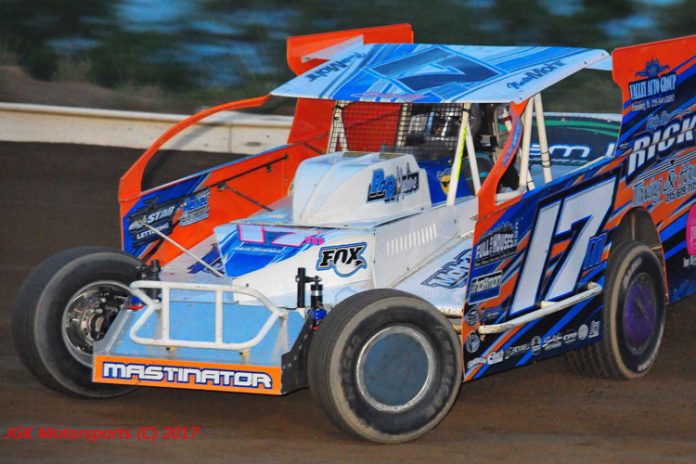 The two drivers have combined to win all five events held at the track and they’ll do battle again on Friday night as the sportsman headline a four-division card which includes the Savage 61 roadrunners, No Sweat Service Group street stocks and the Blast From The Past Vintage Cars. Also on Friday night will be the Kim’s Kreations Mechanics Race and the make-up Enduro Dash 50.

The gates will open at 5:30 on Friday with racing at 8:15. Admission is $10 and kids 12-and-under along with active military with a valid ID are free.

Mammana, who has two wins, a second, a fourth and a fifth, leads Stangle by 137 points heading into Friday night’s race. Shawn Light, Wayne Witmer and Doug Hendricks round out the top five. Mammana won the season-opening race on April 14 and he has yet to finish out of the top five.

With the exception of a 20th-place did-not-finish on opening night, Stangle has won three of the last four races including two straight and has four top-five finishes in his last four races.

The sportsman have two big paying races remaining on the schedule. The first is set for Friday, Aug. 11 with the 30-lap Fayash Memorial which pays $1,570 to win.

Two-time winner Craig VonDohren leads the Steel & Metal Service Center 358 modified point standing by 10 markers over Jeff Strunk. VonDohren is the only driver to repeat in the division so far while Strunk won the season opener. Billy Pauch Jr., Rick Laubach, and Kevin Beach round out the top five. The top four in points are separated by 110 points.

The 358 modifieds will be back in action on Friday, June 23, as they join the URC sprint cars for an open-wheel doubleheader racing card.

Kody Sites leads the roadrunner division point standings and has a track- and division-leading four wins. He leads Terry Kramer by 159 points in the standings with Mike Reichert, Jim Kost and Devin Trexler rounding out the top five.

In just four weeks time on Friday, July 7, it’s the Stevenson Memorial for the 358 modifieds. The 30-lap feature pays $4,000 to win on B&H Landscaping Night. The four-division show will also include fireworks.