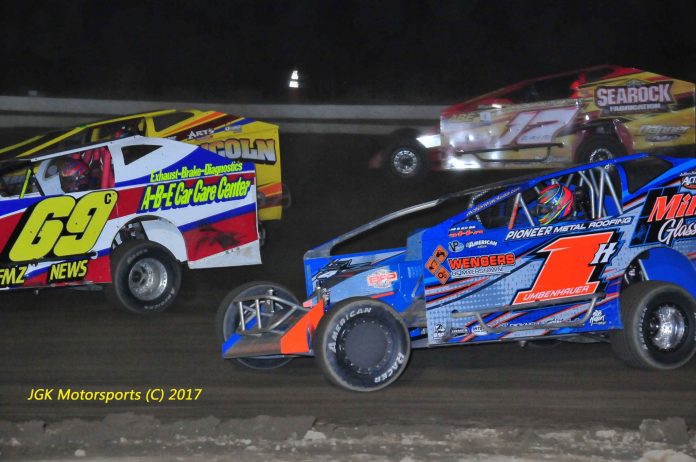 Race fans are reminded that the new start time of 8 pm. with hot laps taking place at 7:30 goes into effect on Friday.

This Friday’s show presented by B&H Landscaping, will see the 358 modified racing 30 laps for $4,000 to win and $300 to take the green. Also on the card will be the U.S.S. Achey Sportsman who will race for a $1,000 pay day; the Savage 61 roadrunners and the No Sweat Service Group Street Stocks.

Fans will be treated to a great fireworks display at intermission. From 5:30 to 7:30, fans can enjoy free hamburgers, hot dogs and water while supplies last along with meeting Ms. Motorsports 2017, Taylor Albert.

There will be race cars on display along with a kids bike giveaway and music. The gates will open at 5:30 on Friday. General admission is $25 while kids 12-and-under and active military with ID are free.


On Friday, July 14, it will be Insinger Performance night with the 358 modifieds, sportsman and roadrunners along an Enduro Dash 50 making up the card. Also that night will be the Leindecker Race Engines Sportsman Challenge and the Pro Shine Roadrunner Challenge.

Then, two days later, the Short Track Super Series for modifieds rolls into town on Sunday, July 16. The 50-lap feature pays $5,000 to win for the modifieds. Also in action that day will be the sportsman and roadrunners.

The Dave Kamp Memorial will highlight the July 21 racing card as the ARDC midgets return to the track for their final race of the season. The sportsman and street stocks will race for $900 to win that night while the roadrunners will race for $383 to win. The Blast From The Past Vintage Cars will also be in action that night

The month of July will close out on the 29th with the No Sweat Service Group night featuring the Fayash Memorial for the sportsman and the Jasen’s Automotive Street Stock Summer Shootout and the Cash Dash sponsored by The Kitchen at 2nd Mountain gun club (Russ & April Killian).

The 30-lap feature for the full-fender division will pay $1,081 to win while the Fayash Memorial will pay $1,570 to win. The 358 modifieds and roadrunners will also be in action that night.