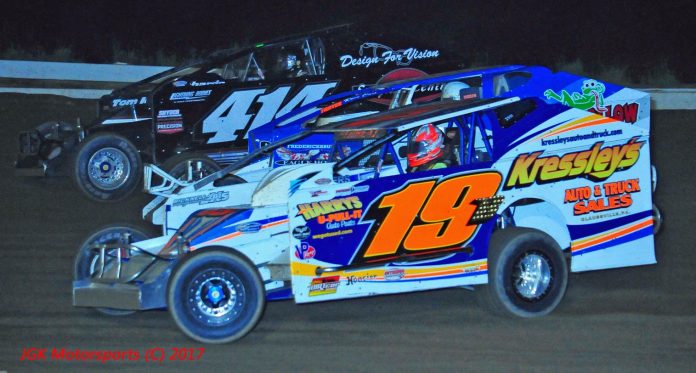 An early-evening shower could not stop Big Diamond Speedway from celebrating the 37th running of the Stevenson Memorial on a night when the track remembered not only Georgie and his father George, but the loss of five of the speedway’s racing family members over the past few weeks.

Brett Kressley scored his first win of the season and his first-ever win in the Stevenson Memorial in the Steel & Metal Service Center 358 modified feature which earned him a $4,000 pay day for the 30-lap event.

This Friday it will be Insinger Performance Night with the 358 modifieds, sportsman and roadrunners along with an Enduro Dash 50. Also on the Friday will be the Leindecker Race Engines Sportsman Challenge and the Pro Shine Roadrunner Challenge.

In the 30-lap 358 modified feature, Kressley took the lead at the start at the race from his pole position as he and outside pole sitter Ray Swinehart jumped out to an early lead on the field.

On a lap 3 restart, Frank Porreca’s car did not fire right away resulting in an 11-car pile-up on the frontstretch which brought out a 15-minute red flag as the track crew did an excellent job in getting the race back underway in a short time. All drivers in the accident were OK.

When the race resumed, Kressley once again took off from the field while a four-car battle for the second was begging to shape up behind him which include two-time winner Craig VonDohren.

By lap 8, Kressley began to extend his lead over the field and five laps latter he was working lapped traffic.

VonDohren would track down runner-up Swinehart during those laps and then worked to his inside of Turn 4 by lap 15.

At this point, Kressley’s lead was more than a straightaway as VonDohren took over the second spot at the start of lap 16.

From there, VonDohren had clear track while Kressley worked lapped traffic, allowing VonDohren to cut the lead down to a straightaway by lap 22.

Kressley would see his big lead erased when the caution came out for Swinehart on lap 26 who lost his right front wheel in Turn 2.

Kressley was able to maintain the lead on the restart as Ryan Godown drove under VonDohren for second in the apex of Turns 1 and 2 before VonDohren raced back under Godown for second on the backstretch.

Kressley would go on to score the win and became the fifth different winner of the season by .540 seconds over VonDohren with Godown settling for third.

“The track was real nice and fast tonight and luckily we had a pretty good starting position,” Kressley said. “The restarts are not always my best thing and I’m learning as we go race-by-race. I saw Ryan (Godown) and Craig (VonDohren) right behind me so I knew that I couldn’t make a mistake.”

Heat for the 29 358 modifieds were won by Swinehart, Godown and Kressley while Frank Yankowski won the consolation event.

In the 20-lap sportsman feature, Ken Eckert would lead the first two laps of the $1,000-to-win event before Chuck Fayash passed him in Turn 2 for the lead on lap 2.

On a lap 3 restart, Light would move around Eckert for second and then begin to work on race leader Fayash.

Light would battle with Fayash for numerous laps staying within striking distance before working to Fayash’s outside going into Turn 1 on lap 17 for the lead.

Light would then have to endure three more cautions over the final few circuits which allowed Doug Hendricks to close in.

Hendricks and Light were side-by-side the entire way around the track on the lap 18 restart before Light managed to pull ahead as the pair raced off of Turn 4.

Light then held off Hendricks at the line by .342 seconds for the win with Wayne Witmer, Eckert Jr., and Fayash, rounding out the top five.

Light said that he did not second-guess himself by giving Hendricks the inside starting spot on the final restart.

In the 20-lap roadrunner feature, Mulhall would led wire-to-wire to score his first career win.

“It was about time that I got one,” he . “I didn’t look at the scoreboard until the checkers fell so I didn’t know who was behind me.”

While Mulhall was alone out front by lap 6, there was a torrid battle going on for second place which grew to seven cars in a pack vying for the runner-up spot.

Kyle Wingle was all over Mulhall a few laps later for the lead when the complexion of the race change as Mike Reichert who was running in the middle of the seven-car pack got a bit out of shape which sent everyone scrambling to avoid the almost spinning car.

This opened the door for Kris Ney and Kody Sites to move forward.

Sites would pass Wingle on the backstretch for second on lap 18 but he was unable to close the gap on Mulhall who would go on to score his first-ever win with a non-stop time of 7 minutes, 44.150 seconds.

Wingle would hold on for third while Reichert recovered from his near spin to finish fourth with Ney rounding out the top five.

In the 20-lap street stock feature, sixth-place starter Heller took the lead on the fourth attempt at a start and then held off Jason Geesaman to score the win.

“I got help up by the lapped car a little bit and I figured if I could run the middle and make Jason pinch down to the bottom, that I could hold him off,” Heller said. “It’s hard to run out front and not know how hard to push it and I pushed it as hard as I can and I almost wrecked 10 times.”