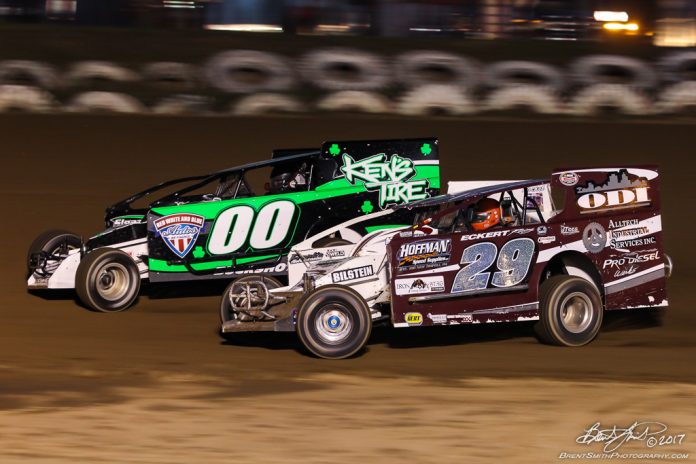 With the mighty modifieds given the night off this past Friday night. The spotlight was on their replacement for the night the ARDC Midgets along with U.S.S. Achey Sporstman, Savage 61 Road Runners and the No Sweat Service Group Street Stocks.

In the ARDC Midget 20 lap feature it was Adam Pierson out of East Corinth, Vermont leading all 20 laps to take the checkered flag. Pierson started the feature on the pole and immediately jumped out to the lead and was never headed. There was only one caution on lap two, with the remaining 18 laps running non-stop. Pierson was never challenged and crossed under the checkered flag to take his first ever win at the speedway.

For the first time in his career, it was Ken Eckert Jr taking the checkered flag in the U.S.S. Achey Sportsman Feature event. Eckert Jr started on the outside of the front row in position number two and was able to get the jump right from the start and grab the lead.
Even though Eckert Jr was able to lead the entire feature event; it certainly was not easy as Doug Hendricks was right behind him to keep the pressure on the leader. There were multiple cautions throughout the event to keep the leaders close together. The key to the victory for Eckert Jr was his ability to use the outside lane to his advantage on each and every restart to stay in front. Shawn Light made a late race charge to grab the third spot and was on the charge looking for more but ran out of laps to make a run at the two leaders.


Jimmy Kost grabbed the lead on the first lap from his second starting position and went on to lead the entire distance to win his second Savage 61 Road Runner feature event. While Kost was off and running to his feature win, Kody Sites, Chris Holland and Terry Kramer were waging a battle behind the leader for the second, third and fourth spots. It was heartbreak for Holland as he blew the motor in his car while running in the third position.

Kost would be your winner on the night with Kody Sites, Terry Kramer, Shawn Mulhall and Andrew Fayash III rounding out the top five.

In the No Sweat Service Group Street Stock feature event, Chris Derr grabbed the lead on lap four and was able to keep the lead after numerous restarts due to the multiple caution flags. Derr would go on to take the checkered flag with Chris Heller in second. Jason Geesaman came back from an early race tangle to finish third with Kyle Saylor and Elvin Brennan completing the top five.

The 358 Modifieds return next Friday night July 28th on No Sweat Service Group Night. The Sportsman, Road Runners and Street Stocks will also do battle during the night.

Hard Charger was awarded to Nate Mohr from starting 23rd and finishing 13th, making up the most spots
in the feature.

Hard Charger award went to Andrew Fayash III. The Tuff Luck award went to Chris Holland who was
charging to the front when his motor blew.