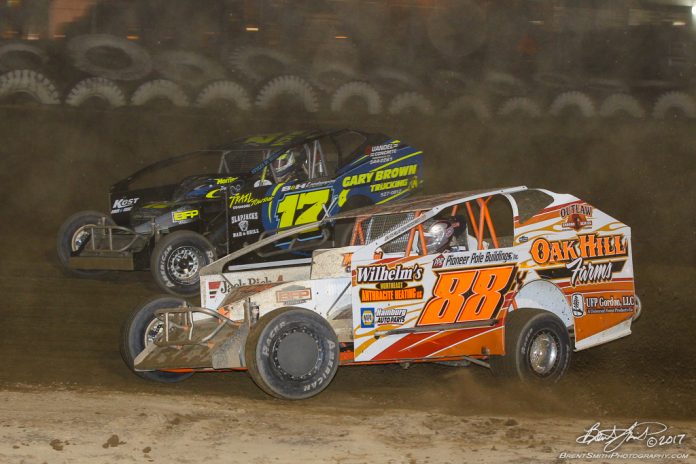 MINERSVILLE, PA – With Friday’s weather once again not cooperating, Big Diamond Speedway was forced to use their Sunday rain date to finally get in a show.

A beautiful sun-drenched day presented itself on Sunday for the cars and stars of the Schuylkill County to put on a show for the fans and when the final checkered flag waved on the night taking the big wins were Craig Von Dohren in the 358 Modifieds. The U.S.S. Achey Sportsman win went to Mike Mammana in a hard-fought battle with points leader Matt Stangle. Over in the No Sweat Service Group Street Stock it was Joey Geesaman and in the No Savage 61 Road Runners Kody Sites was your repeat winner.

In the headline Sheet and Metal Service 358 Modified division it was the birthday boy Craig Von Dohren putting on a late race charge up on the extreme outside to take the win.

Skylar Sheriff and Justin Grim brought the field to the green flag with Grim grabbing the lead on the start. Grim would go on to lead the first few laps before Duane Howard would ascend to the lead on lap five. Howard’s lead would be short lived as Rick Laubach would get by Howard on a lap seven restart to grab the top spot. Laubach would continue to pace the field as all eyes were on the Searock Fabrications #26 of Ryan Godown who was charging hard from his 17th starting spot. Godown worked his way past Howard for 2nd and was setting his sights on Laubach when his good run came to an end as he coasted to the pits on lap 19 with what turned out to be a broken rocker arm in the motor. With the action out front pretty calm, Craig Von Dohren was starting to make a charge to the front. Von Dohren who usually runs the bottom at Big Diamond had changed his line and was up on and above the cushion as he put on a late race charge to get to the front. CVD made quick work of Jeff Strunk, Howard and Billy Pauch Jr to move into 2nd when the caution came out on lap 21. On the ensuing restart CVD blasted to the lead on the outside of Laubach to take the lead. CVD would go on to lead the remaining laps to take career win #88 ironically driving the Dave Dissinger #88X. The win further solidified CVD lead in the battle for the track championship. Rick Laubach would hold for second with Billy Pauch Jr, Duane Howard and Jeff Strunk completing the top five.

After multiple attempts to get the U.S.S. Achey Sportsman race started the field was forced to go single file to get the Feature going. CVD car owner Dave Dissinger took the lead on the start. Dissinger would continue to lead as 14th place starter Mike Mammana was making moves through the field. A restart on lap 14 was the break Mammana needed as he was able to power by Dissinger to take the lead. Mammana would go on to lead the remainder of the race holding off a strong challenge from points leader Matt Stangle to take the win. Following Mammana and Stangle across the line were Dave Dissinger, Chuck Fayash and Jordan Henn

The road runner division would once again see Kody Sites dominate the race as he took the lead on lap five and was never headed after that. Sites took the win over Terry Kramer, Jim Kost, Devin Trexler and Kyle Wingler. Sites would also win the one on one match races on the night.

Next event is Friday 8/18 with the 358 Modifieds along with the Sportsman modifieds competing in the Fayash Memorial along with the Street Stocks, Road Runners. There will also be a 50 lap Enduro Race along with a Powder Puff race.