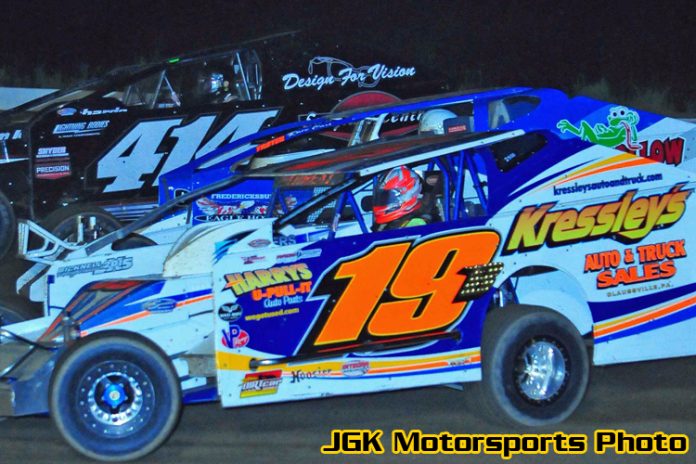 This week it was the U.S.S. Achey Sportsman division headlining the show with the running of the 30 lap “Fayash Memorial” race and standing in victory lane after 30 laps was the current points leader Matt Stangle. The Steel and Sheet Metal Modified feature was won by Brett “The Threat” Kressley after a spirited duel with Craig Von Dohren. Jasen Geesaman won a thriller in the No Sweat Service Group Street Stock division with Jim Kost was the winner of the Savage 61 Road Runner feature. Tyler Lucas was the winner of the Enduro Dash 50.

New Jersey’s Matt Stangle burst on the scene last year as a name to be reckoned with in the sportsman division but this year Stangle has come to the forefront as the man to beat each and every week at the Big Diamond Speedway. Stangle has won multiple feature events this year at the speedway but none bigger than the 30 lap Fayash Memorial race the young racer won last night.

“This is definitely out biggest win of the year. All of our wins have been regular Friday night or Saturday shows. It is a real honor to be able to go out there and win a race like that.”

Stangle had luck on his side last night when he drew the pole position to start last night’s but it wasn’t easy for the current point’s leader as he had to fight off the repeated charges of the Shawn Light time and again. Multiple cautions at the start of the feature forced the race officials to go to single file restarts just to get the race underway. Still it was caution after caution from lap one to lap twelve as the sportsman drivers seemed to be over anxious each and every restart. All the cautions were for minor incidents with most drivers returning to the race. Lap twelve was particular frustrating for the fans as it seemed to take forever to get going with the culmination coming when the red flag was displayed for a fire under the hood of one of the drivers who had pulled into the infield.


Once we got underway again the final 18 laps went non-stop with Stangle leading the remaining distance. Shawn Light would give chase but just couldn’t keep up with the high flying #6 of Stangle. Behind the two leaders Mike Mammana and invader Louden Reimert along with Wayne Witmer and Brian Papiez battle hard amongst themselves all trying to better their finishes. Stangle would go on to take the win over Light. Mammana, Reimert and Witmer rounded out the top five.

The 25-lap feature for the Steel and Metal Service Modifieds was a thriller and Oldfield, PA’s Brett Kressley held off Craig Von Dohren to grab his second win of the 2017 season. A multi-car incident at the start of the race sent both Von Dohren and Duane Howard to the pits with both returning after repairs were made. When the race finally got going it was Skylar Sheriff taking the lead with Kressley right on his back bumper. Once again, the yellow appeared on lap two as Scott Albert rolled to a stop in turn four. As we tried to get it going again Shawn Fitzpatrick and Duane Howard came together in turn three before another lap could be completed slowing the pace.

On this restart Kressley grabbed the lead and was off building up his lead. Lap four saw another yellow for early leader Sheriff coming to stop. After going to the pits on lap one, Von Dohren had already made his way to fifth when the yellow came out. When the green came back out Kressley was still your leader. Von Dohren was making quick work of the field moving by Jared Umbenhaurer for fourth and after another caution flag moved quickly past Billy Pauch Jr and Ryan Godown in consecutive laps to move into second. Once Von Dohren was past Godown he moved in quickly on leader Kressley and started to make his move for the lead. Von Dohren could get under Kressley going into the turns but Kressley could keep his momentum up on the outside and power off the turns with the lead.

In the No Sweat Service Group street stock division, it was Jason Geesaman winning a thrilling four car battle to take the checkered flag. Eric Tripp took the lead on lap three with Geesaman right behind him. Tripp and Geesaman would go at it side by side for a few laps before Geesaman finally was able to work his by Tripp on lap six. By this time Chris Derr and Chris Heller had worked their way up to the front to join in the battle. A terrific four car battle ensued for the remainder of the race as the four drivers swapped positions back and forth. Geesaman was able to hold off the trio and take the win with Heller, Derr, Tripp and Kyle Saylor completing the top five.

The Savage 61 Road Runners put on a nice show for the crowd with Jim Kost taking the win. Multi feature winner Kody Sites took the lead early on and on most nights the race for the win would be over at this point. But Jim Kost had other ideas on this night. Kost had his #126 hooked up on this night and would run down the leader and take the lead on lap six. The remaining laps would be three car battle between Kost, Sites and quick running Terry Kramer. Kost would hold off his challengers to win over Sites, Kramer, Andrew Fayash III and Kris Ney.