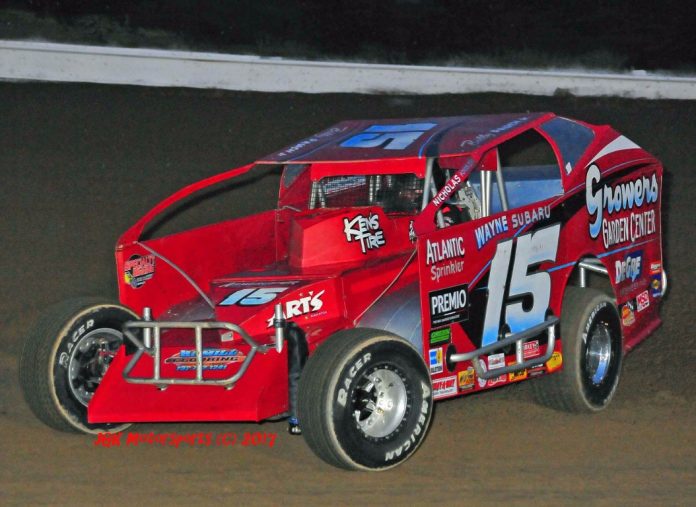 MINERSVILLE, PA – In a season that was dominated by Mother Nature, the Big Diamond Speedway is set to present its annual Coalcracker Weekend to close out the 2017 racing season.

The weekend will start out on Friday night September 1st with “Leinecker Race Engines” Night. The night will feature the Sportsman Coalcracker 40 for the U.S.S. Achey Sportsman modifieds paying a cool $1,600 to win with $160 to take the green. 2017 Sportsman track champion Matt Stangle is the odds on favorite to close out the season with the big win but he will have some tough competition from Shawn Light, Doug Hendricks and Mike Mammana just to name a few who will be looking for the big check at the end of the night. The Sportsman cars will also take part in a series of challenge races before their main event of the night.

Friday night will also feature the Savage 61 Road Runners along with the No Sweat Service Group Street Stocks as they take run their Summer Shootout 30. The Vintage Cars will also take part in the night’s activities.

The 358 Modifieds will also be on the agenda for Friday night to take part in the non-winners race. The winner of the 15 lap feature will automatically guarantee themselves a redraw spot for Sunday’s Jack Rich Inc., Coalcracker 72 race. There are currently 34 drivers eligible to run in Friday’s race non-winners race led by former track champions Duane Howard and Rick Laubach. Other notables eligible are Ray Swinehart, Jared Umbenhauer, Kevin Beach Jr, Scott Albert and Frank Cozze just to name a few. *Special Note – The lineup for the non-winners race will be determined by the draw and no positions are paid.*

Gates open at 5:30pm for Friday’s action with the first race getting underway at 8:00pm. General admission for Friday is $13, Seniors are $11 with Kids 12 and under along with active military with ID are admitted free.


On Sunday September 3rd, the action will ramp up as the mighty Steel and Metal Service modifieds hit the track on “Jack Rich Inc.” Night all in search of the $10,000 first place prize in the running of the track’s annual Coalcracker 72.

The Coalcracker race has a long tradition at the speedway dating back to 1979 when the inaugural running of the race was won by Bob Emerich in a 50 lap feature event. The race has taken on a few different distances since then ranging from 50 to 100 laps with the current version being 72 laps.

Some of the best modified drivers in the Northeast have taken part in the prestigious race throughout the years most without success as the track regulars have dominated the winners circle in the event. The last invader to win the Coalcracker was “Super” Matt Sheppard who won the event driving the Norm Hansell #357 in 2014.

Legendary modified drivers Kenny Brightbill (1992 & 1994) and Billy Pauch (2000 & 2002) are next in line with two wins apiece. The nine drivers with a single win in the event are Bob Emerich (1979), Paul Koch (1981), Fred Rahmer (1985), Richie Tobias (1989), Rick Schaeffer (1991), Billy Schinkel (1993), Tom Mayberry (1995), Keith Hoffmn (2003), Doug Manmiller (2012) and Matt Sheppard (2014).
This year’s Coalcracker race is shaping up to be a battle amongst track regulars once again with Craig Von Dohren being the odds-on favorite to go back to back in the event. Von Dohren has been consistently fast throughout the year and would like nothing better than to cap off his year at the speedway with the $10,000 win. There will be several drivers who might have something to say about such as Ryan Godown and Brett Kressley. Both of these drivers have won this year at Big Diamond and have been fast. If both Godown and Kressley can stay away from mechanical issues that have plagued them this season the will certainly give Von Dohren a run for his money.

Other drivers looking for the big check are Billy Pauch Jr who has been improving throughout the year and will be looking to piggyback his “Prelude to the Coalcracker” victory last Friday night with another huge win. Jeff Strunk, Duane Howard and Rick Laubach have all seemed to be a tick behind in speed this season with Strunk being the only one of the three to grab a win this season. They are just a few of the strong Big Diamond regulars that will be looking to end their season on a high note.

Expected invaders to compete on Sunday night looking to steal the local’s money will be led by “Flying” Ryan Watt who has won his share of big races this year. Watt is in the midst of a career year and would like nothing better than to stand in victory lane on Sunday night. Former race winner Billy Pauch will be on hand driving the Danny’s Pizza Pizzazz car normally driven by his son Billy Pauch Jr. Frank Cozze, Doug Manmiller & Danny Bouc are just a few of the invaders who are expected to be in competition this Sunday. Also expected to make his Big Diamond 358 modified debut this Sunday is 2017 Big Diamond Sportsman Champion Matt Stangle.

Also on the schedule for Sunday night will be the No Sweat Service Group Street Stock paying a hefty $1000 to win feature event along with the Savage 61 Road Runners who will run in a $300 to win feature race.

Capping the night off for the fans will be a fantastic display of Fireworks!

Gates open on Sunday at 5:00pm with warm-ups starting at 7:30pm and the first racing action of the night will begin at 8:00pm.

The track will offer free camping but no hook-ups are available.