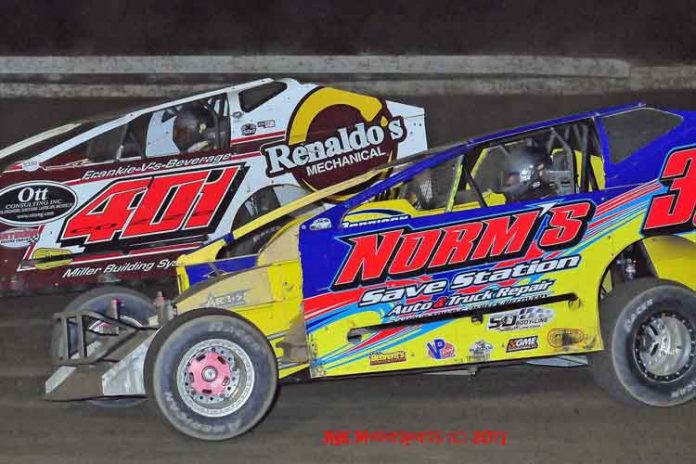 MINERSVILLE, PA – Duane Howard’s nickname at Big Diamond Speedway is the “The Diamond Cutter” in reference to how he used to dominate the field at the Schuylkill County oval. However in recent years the victories have come far and in between team for the driver out of Oley, PA. As a matter of fact Howard’s last victory at the speedway was back on May 29th of 2015. Well over two years ago.

Howard broke out of his two year winning drought in a big way by taking the victory in the track’s signature race, the Jack Rich, Inc Coalcracker 72. It was the seventh time Howard has won the event in his career.

The race started out with pole sitter Anthony Perrego in the Superior Remodeling #44 TEO getting the jump on the veteran Frank Cozze to take the lead. Perrego would go on to lead the first four laps before Ray Swinehart would stop to bring out the first caution of the night. Cozze was able to beat Perrego on the restart to turn one to take the lead. Cozze would stretch his lead on the field as Perrego was now trying to hold off the charges of Billy Pauch Jr for the second spot. Cozze was dicing his way through lapped traffic when the 2017 track champion Craig Von Dohren slowed to bring out the yellow on lap 27.

Von Dohren limped into the pits and made repairs just as the green was coming out as Cozze still maintained his lead over the new second place runner Pauch Jr. Howard was also starting to make his presence known as well by taking over third. Yellow again was displayed for Dominick Buffalino who went around in turn one. Starting to make his way through the field from his eleventh starting spot was three time winner of this race Ryan Godown as he now sat in fourth.


When the field took the green flag for the second part of the race it was Pauch Jr getting around Cozze going into turn one to take over the top spot. Godown was also able to get around Howard at that point for third. The yellow again was shown to the field as Laubach and Kressley tangled. On the ensuing restart Pauch Jr continued to lead as Godown and Howard both slipped by Cozze dropping him to fourth. Mike Gular and Bobby Trapper each brought out cautions on laps 50 and 52. With the laps running out the battle for the lead on the ensuing restarts were getting physical between Pauch Jr and Godown.

The two arch rivals battled hard on the restarts with contact being made. Pauch Jr continued to hold off Godown but now Howard was turning up the wick on the Morrison small block bolted under the hood of the #357 Bicknell chassis as he worked his way past Godown for second and quickly ran down Pauch Jr looking for the lead. Howard would get under Pauch Jr but the leader would hold his position and maintain the top spot. Another yellow interrupted the fight for the lead.

Howard would not be denied on the restart as he was able to use the outside line to his advantage and power by Pauch Jr going into turn one to take over the top spot. Once in front Howard never looked back and started to stretch his advantage over Pauch Jr. The yellow flag came out for the last time with four to go but Howard was up to the challenge as he sped away on the restart to claim the $10,000 win. Godown was able to slip past Pauch Jr late to finish second with Pauch Jr, Cozze and Perrego rounding out the top five.

“Man, it’s great to finally win one here again” said Howard. “It’s been way too long for sure. This team works too hard in the shop and to not get a win here is something that is not acceptable to me or to Norm. Norm gives me great equipment to run and I am really glad to be able to get it done for him. We thought we hit on something last Friday in the Prelude to the Coalcracker race and we carried it through to tonight and it worked to perfection.”

The No Sweat Service Group Street Stocks closed out their season with a 20 lap feature event and it was Chris Heller taking the lead on a lap two restart from Dean Hine. The race would go caution free for the next 18 laps with Heller leading the entire way. Eric Tripp would close the gap towards the end of the race but it was never really that close as Heller would take the checkered flag over Tripp, Chris Derr, Jasen Geesaman and Dean Hine.

Devin Trexler and Jim Kost put on quite a show for the fans in the 20 lap Savage 61 Road Runner main event as they traded the lead back and forth after a lap 18 restart battling for the win. Kost would grab the lead from Trexler who had led all the previous 18 laps but Trexler wouldn’t be denied on this night as he dove back under Kost coming out of turn four to the checkered flag. The two drivers banged quarter panels coming to the line with Trexler edging out Kost to take the big win. Andrew Fayash III put on a great run from his ninth starting spot to finish third with Kody Sites and Mike Reichert rounding out the top five.

The Coalcracker weekend was a great success with great crowds and some even greater racing leaving us all looking forward to 2018. Despite the many rainouts this season the management of the Big Diamond Speedway would like to thank the drivers, the teams and most importantly the fans for supporting the track in 2017. Please have a safe and happy winter and we look forward to seeing you all again in the spring of 2018.

The road runner heats were won by Devin Trexler and Jim Kost.

The street stock heats were won by Dean Hine and Elvin Brennan III.