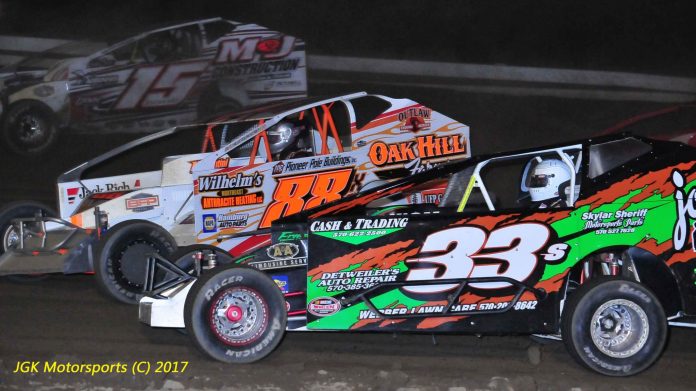 MINERSVILLE, PA – The 2018 season at the Big Diamond Speedway is shaping up to be its biggest season ever with a plethora of special events planned for the Minersville, PA oval. Track promoter Jake Smulley has been working hard over the winter months to bring the fans a schedule that they can get excited about for the upcoming year.

Highlighting the season’s events will be the first ever appearance of the All-Star Monster Truck Tour and as always, the $10,000 to win Coalcracker 72 for the Modifieds.

The All-Star Monster Truck Tour sponsored by Red, White & Blue Autos will be in town for a two day show on Saturday May 19th and Sunday May 20th. There will also be Freestyle Motocross on both dates sponsored by Schaeffer Motorsport and Tough Trucks. This event is sure to be a big success so please click on the link provided here to get your tickets early. https://www.eventbrite.com/e/big-diamond-speedway-all-star-monster-truck-tour-tickets-41637078623

As always, the season will kick-off with a car show at the Village Mall in Pottsville, PA from Monday March 12th and running through Friday March 16th. Car show forms are available on our new website www.bigdspeedway.net

The 2018 racing season with get underway with a practice scheduled for Friday March 30th for all divisions along with a $3,000 winner take all Enduro race (30 car minimum). Rain-date for the practice session on Saturday March 31st.


The season for the mighty modifeds will start on Friday April 6th with Schaeffers’ Motorsports Night culminating with a 30 lap $4000 to win feature event for the 358 Modifieds along with a 20 lap feature race for the Sportsman paying $1000.The Roadrunners and Street Stocks will also be part of opening night. Rain date for the opener will be on Friday April 13th.

Friday April 13th will be No Sweat Service Group Night with the annual “Money in the Mountains” Big Block/Small Block Challenge Modified 40 paying a cool $6,000 to the winner. This race has always seemed to draw the best of the best modified drivers from the area and this year should be no exception. Also, part of the nights activities will the Sportsman, Roadrunner and the 600 Modifieds. Rain date for this show will be Friday April 20th.

A new event will take place on Friday May 4th when the track will present the first ever “Topless 35” for the Modifieds with a very lucrative first place prize of $5,000. This will be a points show for the 358 Modifieds who will run the show without roofs and windows. The complete rules for this race are still being finalized and will be available as we get closer to the race season.

The United Racing Club Sprints will invade the Minersville, PA oval for two shows in 2018. The first race will take place on Friday May 25th with the second date taking place on Friday June 22nd. Both shows will feature the 358 Modifieds on the same card as the winged warriors making for a couple of can’t miss races here in God’s country.

The Roadrunners will take center stage on Friday June 8th as part of Savage 61 night. The Roadrunners feature event on that night will pay $661 to the winner plus a cash dash. The 358 Modifieds, Sportsman, Street Stocks and Enduro will also be a part of the night’s racing card.

Brett Deyo’s Short Track Super Series once again will invade the speedway for the fourth straight year with the “Anthracite Assault” on Tuesday June 5th. This event has always had an enormous field of modifieds in the pits as once again this show is a combination North/South series race which brings in the best of both regions for the 50 Lap $5,000 to win race. The previous three Anthracite Assault races have all been won by track regulars with Rick Laubach winning in 2015, Ryan Watt in 2016 and Ryan Godown in 2017. Will this be the year an invader defeats the regulars and walk off with the big check?

The George Stevenson Memorial race will be returning in 2018, with this year’s race scheduled for Friday July 6th as part of B & H Landscaping Night. This year the George Stevenson Memorial race for the 358 Modifieds will be run in the “Twin 20’s” format which has always been a fan favorite. This format can make or break a driver trying to win the coveted track championship. The Sportsman, Roadrunners and Street Stocks will complete the night’s card along an always fantastic Fireworks display.

A new event for 2018 will be the Leindecker Race Engines Sportsman Summer Classic on Friday night July 27th. This night it will be the Sportsman Modifieds in the spotlight competing for an unheard of first place prize of $5,000 for a 40 lap feature. The 358 Modifieds, Roadrunners and Street Stocks will be running their regular show as well on the night.

August will be a busy and a lucrative month for the drivers in all divisions as the season starts to wind down. The month of August will start with the “Hunt the Giant” night on Friday August 3rd with a full show on the night that will feature the No Sweat Service Group Street Stock Challenge. Friday August 10th will once again feature a full show with the Leindecker Sportsman Challenge on deck for the night.

Friday August 17th will be the annual “Prelude to the Coalcracker” race for the 358 Modifieds paying a cool $4000 for the 35 lap feature event. The 358 Modifieds will also take part in The Catering Company Modified challenge races. This race is sure to draw some outsiders to the track to tune their cars for the end of the year Coalcracker 72.

On Friday August 24th, the Sportsman Modifieds will be in the spotlight as they compete in the annual “Fayash Memorial” 25 lap feature with the winner receiving a $1,570 payday. The roadrunners will also compete in the Pro Shine Auto Detailing Challenge races as part of the night’s activities.

The 2018 season will culminate on Friday August 31st and Sunday September 2nd with the track’s annual Coalcracker Weekend. Friday night is Leindecker Race Engines Night and will feature the Sportsman modifieds competing in the Sportsman Coalcracker 40 with $1,800 going to the winning driver. Friday night will also feature the Roadrunners, Street Stocks, Vintage Cars and an Enduro 50.

The speedway’s marquee event of the season will take place on Sunday September 2nd with the annual running of the Jack Rich Inc, Coalcracker 72. The annual race will pay a whopping $10,000 to the winner. Last year’s winner and all-time leading winner of the Coalcracker race with seven wins Duane Howard will be in action looking to defend his win in 2017. The Street Stocks will take part in a 20 lap feature race paying the winner a nice $1,500 on the night. The Roadrunners and 600 Modifieds will also be part of the night’s activities along with a spectacular Fireworks display. Rain date for this race is Monday September 3rd.

Big Diamond Speedway would like to welcome aboard our 2018 season sponsors. Mattera’s Electrical & General Contracting will be the sponsor of the Modified division. Returning sponsor USS Achey will once again sponsor the Sportsman division. No Sweat Service Group will return to sponsor the Street Stock division as will Savage 61 who will once again return as the sponsor of the Roadrunner division. With our sponsors help, 2018 is shaping up to be a banner year at the speedway!

The speedway has also changed the start time for 2018 to help the fans and competitors get home a little earlier. For 2018, warmups will now start at 7:30 with racing starting afterwards.

2018 Media Credential applications will be available on the website and must be filled out completely and either mailed or emailed to the address listed on the website.