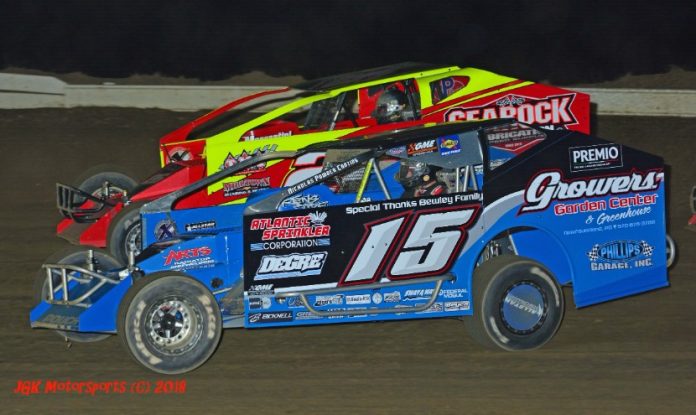 The first ten laps of the feature, Pauch battled with Frank Yankowski for the lead. The final ten laps, it was a different challenger in Godown. Three leaders and 30 laps later, it was Pauch with the money in his hands.

“He (Yankowski) ran a heck of a race that kid, or older guy. He did a nice job and we just got him on a restart,” Pauch notes. “I gave Ryan (Godown) room coming out of four, and I thought we were alright. He pushed the nose and came across, and I don’t know, we hit. We’ll race another day and take this $4,000 to the bank.”

Yankowski and Godown led the 358-Modified field to the green in front of a packed house for the 30-lap feature. The front row starters came in contact just seconds into the race, with Yankowski taking the lead and Godown dropping to the back of the top 10. Godown fans worry not, as he wouldn’t stay there for long.


Up front, Pauch began pressuring Yankowski for the lead. By lap eight, Pauch’s inside line had him even with Yankowski, and Pauch cleared him the next time around. However, Bobby Trapper’s slowing machine negated the pass and handed Yankowski the top spot with nine laps completed.

Pauch was not to be denied on the restart, as he drove around Yankowski for the lead. A multicar crash at the back of the field drew a second caution a lap later, but this time Pauch kept his position. On this next restart, Godown charged into second.

Over the next ten laps, Pauch was able to maintain a steady one second advantage over Godown, Craig Von Dohren, and 14th starter Jeff Strunk. On lap 21, MeMe Desantis spun in between turns one and two. While this saved Pauch from encountering lapped traffic, it brought Godown and company to his rear bumper. Pauch chose the bottom for the ensuing restart, which at the time proved to be the wrong decision.

By turn one, Godown was the new leader, but Pauch remained very close. A small mistake on the cushion the next circuit allowed Pauch another chance, and a top-to-bottom crossover netted Pauch the lead once more on lap 23. With seven to go, the brawl for the win had just started.

As the flagman showed an open hand to the field signaling five to go, Godown pulled a similar move on Pauch to draw even down the backstretch. The two leaders made heavy contact, but Pauch remained in front. The next lap, Pauch and Godown hit once more entering turn one, and Pauch continued to hold on by a thread.

Over the last three laps, Pauch held just enough of an advantage to remain in front, and scored the $4,000 check to most of the crowd’s approval. Godown held on for the close second, followed by Von Dohren, Strunk, and Duane Howard.

As Pauch pulled into victory lane, the damage to his Bicknell was obvious, as a broken radius rod meant his left rear tire was sitting about a foot further back than normal. Exiting the car, Pauch had mixed emotions about the race.

“We came here with a good car, but as you can see we broke the left rear radius rod from some contact there when I was going straight down the straightaway,” Pauch bluntly stated. “Well, that’s the racing here! Hats off to the fans, because that was a good race.”

Modified heats were won by Pauch, Beach and VonDohren. The modified consolation was won by Reppert. 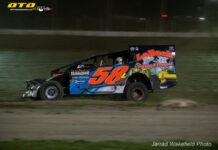 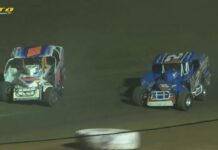 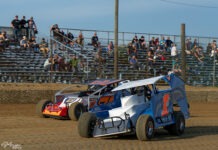