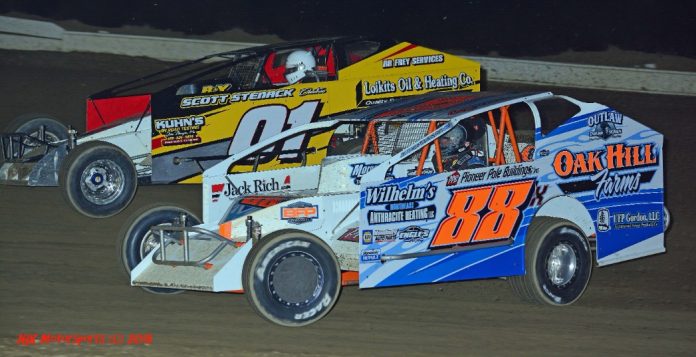 POTTSVILLE, PA –  It was all Craig Von Dohren last night in the 25-lap 358 Modified feature event as he powered his way around a strong running John Willman on lap 10 and went on to win his second feature in a row. It was also Von Dohren’s second win of the season at Big Diamond.

“We had a really good car tonight” cited Von Dohren. “I wasn’t sure where to go tonight and everyone was running the bottom, so I really had no choice but to go the top. But once I got out front I went back down to the bottom and figured if somebody was going to go around me then I would have to race them. We got a good jump early starting eleventh and being able to move up quickly. I think the outside lane was still a little wet when they started the race and they all had a problem getting going so that helped us pass some cars early on.”

Scott Albert brought the field to the green flag on Mattera’s Electrical and General Contracting night at the track, but it was John Willman surging out to the lead early on. Billy Pauch Jr, Duane Howard and Craig Von Dohren were on the move early on as they outside lane had trouble getting going on the initial start to all drive up to the front early.

Von Dohren who usually makes his way to the front using the low line was flying high on the outside tonight as he powered around Willman on the outside of turn two to take the lead on lap ten. Willman who has struggled so far in 2018 was on his game tonight as he never let Von Dohren get away from him and was right on the back of the 2017 track champion’s bumper each and every lap never letting the leader get too far in front.

The caution came on lap 15 when Jeff Strunk came up lame with a flat tire. On the restart Von Dohren stayed out front with Willman continuing to hold off a howling pack of drivers behind him consisting of Billy Pauch Jr, Duane Howard and Ryan Godown. The racing was instense to say the least behind Willman as another yellow appeared for the spinning car of TJ Lilly.


The green came out for only one lap as a multi-car pileup once again slowed the pace with all cars being able to continue. This would prove to be the last yellow of the race and when the race resumed it was once again Von Dohren leading the way with the surprising Willman staying right with him.

Eventually Von Dohren was able to put a little space between himself and Willman as Godown, Howard and Pauch Jr all started to put the pressure on Willman. Godown and Howard battled extremely hard lap after lap with Godown eventually able to get by for third. Godown tried every trick in the book to get by Willman but the “Ultimate Underdog” Willman was up to the challenge.

Mark Smith completely dominated the 25-lap URC feature event taking the lead early on and never looked after that. Eddie Strada was able to close the gap at times as the leaders were dodging lapped cars, but Smith was never seriously challenged. Jason Schultz was very strong and was able to get by Strada for second with two to go but then had his engine explode coming to the white flag causing a melee behind him which took out the fourth place running car of Robbie Stillwagon.

It was Mark Smith in for the win with Eddie Strada, Chad Layton, Jimmy Stitzel and Troy Betts the top five.

It was Shawn Light taking the checkered flag in the 20-lap USS Achey Sportsman feature event. Light took the lead on lap one, but it was never easy as Dean Bachman and Doug Hendricks joined the battle upfront. The three cars fought hard for the lead with newcomer Billy Osmun lurking in the background. The leaders were forced to deal with lapped traffic on the last lap and Hendricks gave it one last try to steal the win, but Light was able to hang on by a half a car length to take the win.

Two-time winner Savage 61 Road Runner winner Mike Reichert was once again able grab the win in the 20-lap main event to pick up his third win of the young season. The action was fast and furious early on with Terry Kramer Jr and Chris Holland battling hard. Lap 13 was turning point of the race as the two fought hard for the lead with Kramer getting spun by Holland. Kramer was able to restart with Holland being put to the rear for rough riding. This was the break Reichert needed as he assumed the lead and was able to hold a strong challenge from last week’s winner Kris Ney to take the win.

Joey Brennan was your winner in the No Sweat Service Group Street Stock division taking the hard-fought victory over Kody Sites and Chris Heller.

Next week on Friday June 1st, the 358 Modifieds will have the night off as the Central PA Legends will visit the track along with the Sportsman, Road Runners, Street Stocks, the Vintage cars along with an Enduro. Saturday June 2nd, the Kenny Wallace Racing Experience will be at the track. Click on the link for more information https://www.facebook.com/events/147430482635098/

The modified heats were won by Mike Lisowski, Scott Albert and John Willman. The consolation was won by Ryan Krachun.

The sportsman heats were won by Doug Hendricks, Michael Burrows and Kevin Brady. The consolation was checkered as only 6 cars attempted to take to the track.

The Road Runner heats were won by Kris Ney and Matt Ney.

The URC heats were won by Jason Clauss, Troy Betts and Mark Smith.