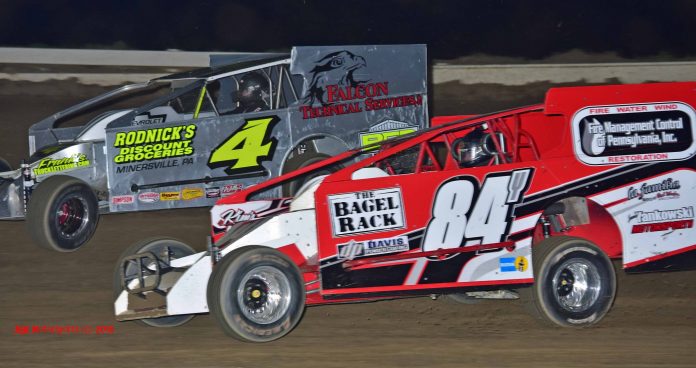 POTTSVILLE, PA – Racing phenom Alex Yankowski continues to dazzle the field in the USS Achey Sportsman division at Big Diamond Speedway by winning his second feature of the young season. The 13 y/o Yankowski battled last weeks winner Shawn Light in a one lap shootout to win the 20-lap feature event.

Tyler Reber brought the field to green to lead lap one. Veterans Doug Hendricks and Wayne Witmer were on the move early and quickly joined the action up front along with Kevin Brady. A terrific battle ensued up front between Hendricks, Witmer, Brady with Yankowski joining in the fray as early leader Reber begins to fade.

It took two attempts to restart the race after a lap ten caution with contender Hendricks being involved in the second yellow ending his bid for victory. Once the race resumed it was Witmer out front with Yankowski following closely behind as Craig Whitmoyer and Shawn Light both throw their helmets into the mix for the top spot. Following a caution on lap 15, Yankowski was able to grab the lead from Witmer with Light and Whitmoyer also getting by Witmer to move into second and third. Witmer’s strong run comes to end with apparent engine problems. The yellow light comes back on as the field takes the one to go sign setting up the last lap shootout between Yankowski and Light. Yankowksi performing like a veteran makes no mistakes on the restart and motors on to the win.

The Central PA Legends made their first visit to the speedway in 2018 and provided the fans with some terrific racing. Mason Chaney takes the lead early on, but Bob Stough grabs the lead on a lap five restart. Stough’s lead didn’t last long as Scott Houdeschell was able to get to the point with a good restart after a lap eight yellow. A terrific four car battle took place the remainder of the race between Houdeschell, Stough, Chaney and a hard charging Trent Yoder. With two to go it was a side by side battle for the lead between Chaney and Houdeschell. The pair swapped the lead back and forth with Chaney coming up victorious in the end. Following Chaney and Houdeschell across the line were Trent Yoder, Bob Stough and Jeremy Ott.


The Savage 61 Road Runners put on yet another terrific main event at the speedway with Kris Ney winning the main event after a great race with Terry Kramer. Mike Reichert, Chris Holland and Jim Kost completed the top five.

Kody Sites was the winner of the 20-lap feature event in the No Sweat Service Group Street Stock Division. Sites. Chris Heller, and Joey Brennan fought tooth and nail in the mid portion of the race with Sites eventually taking the lead to go on to the victory. Brennan ended up second with Heller, Kyle Saylor and Dean Hine the top five.

The Blast from the Past Vintage cars were also on hand Friday night with the Vintage division race won by Wyatt Jacobus Sr, followed by Curt Neiman and Rick Mutter. In the Modified division it was Andy Cassel followed by Doug Stepanchuk and Brett Peters.

The 50-lap endure race was won by Scott Riggleman over Chris Graver and Chris Reichert.

The heat races were won by Kevin Brady, Matt Clay and Doug Hendricks

Heat races were won by Terry Kramer and Jim Kost.

The street stock heat was won by Kyle Saylor.

The Blast from the Past Vintage race was won in the Vintage division by Wyatt Jacobus Sr. followed by Curt Neiman and Rick Mutter. The modified race for the series was won by Andy Cassel followed by Doug Stepanchuk and Brett Peters.