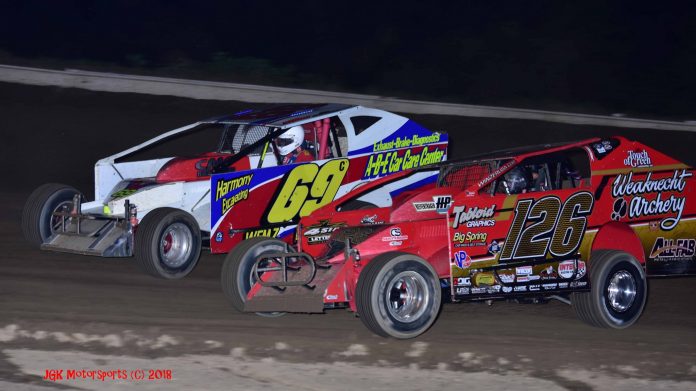 Duane Howard is used to winning races at Big Diamond Speedway, after all Howard is the track’s second most winningest driver of all-time. But in recent years the wins have not come so easily for the Oley, PA driver at the Schuylkill County dirt oval. As a matter of fact, you would have to go all the way back to May 29th, 2015 to find the last time Howard won in a points paying event at the speedway. Howard did manage to win the track’s biggest race of the year last season when he won the “Coalcracker 72” race in September and Howard was also victorious in this year’s “Money on the Mountain” race back in April but those were not points paying events.

“We had a good night tonight” cited Howard. “The restarts went our way tonight and everything worked out for us. Godown got by me on that one restart when he beat me to the bottom in turn one, but we caught a break when the yellow came back out. Restarts are the key here at Big Diamond and you have to be ready to go when the green flag comes out and if you’re not you won’t win. I was on my restart game tonight and it payed off. Norm (car owner Norm Hansell) and the guys gave me a great car and tonight we didn’t overthink thing and it paid off.”

Shawn Fitzpatrick who has had terrible luck this so far this season led the Mattera’s General and Electrical Contracting Modifieds to the green and immediately jumped out to the early lead, but the caution would be displayed after one lap when current points leader Craig Von Dohren came to a stop on the front stretch with a flat tire. Von Dohren headed to the pits and was able to rejoin the field as they went back to green.

Billy Pauch Jr was on the move early and making his presence known when he moved into the second spot on the restart only to have it negated when Mike Lisowski caused the caution to come before the field could complete a lap forcing Pauch to go back to his previous spot in the running order. Once the race resumed it didn’t take Pauch too long to get back up to the runner-up spot and start to put the pressure on Fitzpatrick.

Fitzpatrick continued to lead with Pauch lurking a few car lengths behind him just waiting to make a move as the filed approached the halfway mark in the feature event. While Pauch was stalking the leader Ryan Godown, Duane Howard and Jeff Strunk were all making moves to the front and were sitting in spots third through fifth. Godown was able to catch Pauch and move into second with 14 laps complete. Pauch wasn’t giving up and on lap 18 dove low underneath Godown going into turn three and when Godown came back down the track the two rivals bumper wheels with Pauch doing a slow spin into the infield.

The caution flag came out at the same time and Pauch thought he should have gotten his spot back in the running order. The officials thought otherwise and Pauch was moved to the back of the pack and at this time Pauch decided to call it a night and head to the pits.

When the race resumed it was Howard who was able to make a bold move from third to challenge for the lead and as the field completed lap 19 Howard was the new leader with Fitzpatrick, Godown and Strunk in hot pursuit. Keven Beach brought out another yellow and on this restart, it was Godown who made the move to the front as both the leaders were preoccupied with themselves allowing Godown to sneak underneath both of them to take the lead but Howard caught a break when Strunk and Frank Porecca came together in turns three and four before the lap could be scored giving the lead back to Howard. This time Howard was ready for anything on the restart and took off easily into the lead as Godown was battling with Fitzpatrick for second. Godown made his way past the strong running Fitzpatrick but it was too little too late to challenge Howard for the win. Howard streaked under starter Jeff Merkel’s checkered flag to take the well-earned win with Godown, Fitzpatrick, Von Dohren (from the rear) and the steady Ryan Krachun the top five. Finishing sixth thru tenth were Frank Yankowski, Heath Metzger, Ray Swinehart, Kevin Beach Jr and Frank Porecca.

In the 20-lap U.S.S. Achey sportsman feature it was Doug Hendricks finally able to grab his first victory of the season. Hendricks has been close on a few occasions but has not been able to close the deal until tonight.

Dakota Kohler shot to the lead at the start of the feature from his front row starting spot, but a hard charging Wayne Witmer took the lead from Kohler as the field completed lap two. Hendricks who started in the eighth spot was on the move early also and when the first yellow flag was thrown on lap seven was up to the runner-up spot. Witmer choose the top for the restart and when the race resumed Witmer was back out front.

Hendricks was not to be denied on this night as he immediately started to put the pressure on the leader Witmer. As the two cars raced close together, it was Hendricks finally being able to assume wrestle the lead from Witmer on lap eleven. Witmer wasn’t about to give up and took the lead back one lap later. The pair raced side by side for the next two laps before Hendricks was able to finally assert himself and take the lead for good on lap 14.

From that point on Hendricks was able to stretch his lead out to a comfortable margin and take the win over Witmer. Craig Whitmoyer, Daryl Dissinger and last week’s winner Alex Yankowski completed the top five.

After a very successful meet and greet before their feature event, the Savage 61 Road Runners did what they always do and put on a very entertaining race in their 20-lap feature event. Shon Elk grabbed the lead at the start with Matt Ney following him in close pursuit. Ney was able to get the lead from Elk on a lap five restart with a lively battle going on for third between Kris Ney, Chris Holland, Mike Reichert and Andy Fayash III. Multi-time winner Reichert spins to bring out the caution on lap ten.

On the restart Kris Ney was able to grab the lead and looked to be cruising to victory when his car suddenly slowed a couple laps later handing the lead back to Matt Ney with Fayash and Holland putting on the pressure. The 77 of Fayash proved to be the better car on this night as he grabbed the lead a lap later and went to victory lane over Holland, Matt Ney, Reichert and Terry Kramer.

The 20-lap main event for the No Sweat Service Group Street Stocks was a crazy affair with winner Elvin Brennan having to come from the back after spinning out on lap one while in the lead. The race looked like it was going to decided between Joey Brennan and Kody Sites as the two battled hard along with Chris Heller through the middle portion of the race. Sites drove it in hard coming out of turn four on the bottom looking for the lead but couldn’t hold his line and drove into the leader Joey Brennan who spun to bring out the caution. Sites was put to the rear for rough riding and when the race resumed it was Jeremy Becker who was in the lead but not for long as Elvin Brennan had rebounded from his lap one spin and was not back in the picture. Brennan goes around Becker to take the lead and the win. Eric Tripp also got by Becker to finish second with Becker ending up third. Joey Brennan rebounded to finish fourth with fifth place going to Mike Radocha.

Scott Riggleman was the winner of the 50-lap endure race to end the night’s activities.

The modified heats were won by Ryan Godown, Shawn Fitzpatrick and Jeff Strunk. There was no consolation.

The sportsman heats were won by Tyler Reber, Daryl Dissinger and Alex Yankowski. No consolation was needed.

The road runner heats were won by Andrew Fayash III and Chris Holland.

The street stock heats were won by Elvin Brennan III and Kody Sites.

The enduro was won by Scott Riggleman followed by Vinnie Wenrich, Seth Reichert, Chris Graver and Scott Lord. Did not finish were Josh Ferraiolo, Jacob Baver and Eric Gabalis.