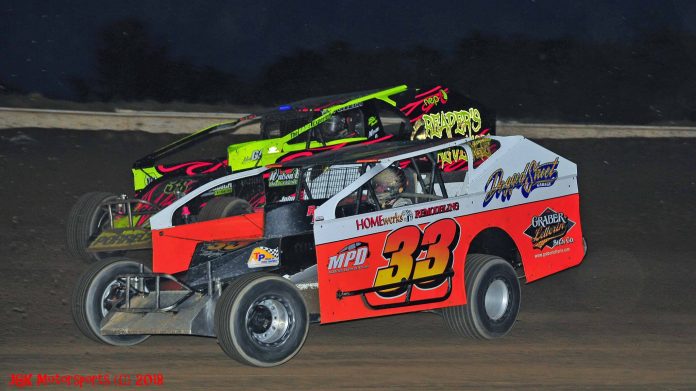 This Friday night will be a regular four division show headlined by the Mattera’s Electrical and General Contracting 358 Modifieds. By virtue of his win last Friday night, the “Diamond Cutter” Duane Howard has rocketed up to third place is the season long quest for the track title behind new points leader Ryan Godown who by virtue of his second-place finish last week has moved into the points lead over Craig Von Dohren who battled back from a flat tire on lap one to finish fourth. The battle between Godown and Von Dohren for the championship will be one to watch all season long with Howard ready to pounce should one of them falter.

Not to be outdone is the seesaw battle going on for the points lead in the U.S.S. Achey Sportsman division. Thirteen-year-old Alex Yankowski and grizzly veteran Craig Whitmoyer have been swapping the points lead back and forth the past few weeks. This week Whitmoyer has reassumed the points lead by a single point after his third-place finish last Friday night over Yankowski who finished fifth. Wayne Witmer and last week’s feature event winner Doug Hendricks also remain in the mix for the championship.

The Savage 61 Road Runners will also be in action with points leader Mike Reichert looking to extend his points lead after an off week last Friday night where he could only muster up a fourth-place finish after having to come from the back of the pack after spinning out midway through the feature event. Chris Holland, Kris Ney and Shawn Mulhall are all locked in tight battle for second thru fifth just waiting to pounce should Reichert suffer a bad night.

The points battle for the No Sweat Service Group Street Stock title is also a barn burner with Chris Heller and Joey Brennan being separated by only one point. The Street Stocks along with the Road Runners put on some of the best side by side action each and every Friday night at the Schuylkill County dirt oval and are feature events you will not want to miss.

General admission on Friday night is $15, Seniors $13, kids 10-11 are $10 and kids under 10 are admitted free. As always active Military personnel are free with ID.

Coming up on Friday June 22nd will be the return of the URC Sprints along with the 358 Modifieds, Road Runners and Street Stocks.