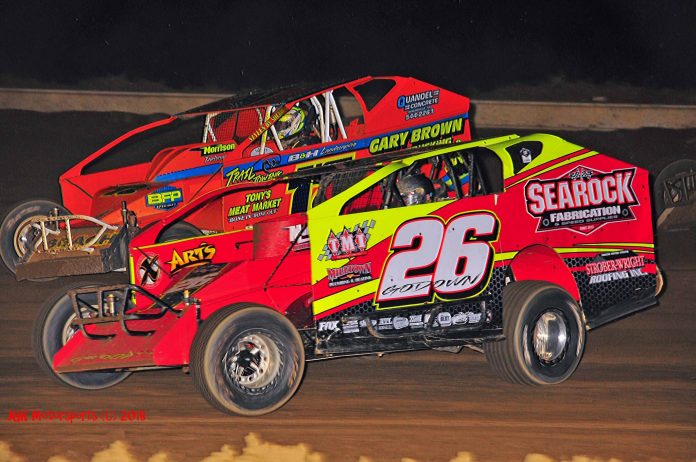 POTTSVILLE, PA – You would think that leading the points and having your worst finish of the season being third, that Ryan Godown would be happy with the way things have been going on Friday nights at the Big Diamond Speedway. But even with those stats in which most drivers would be ecstatic with, Godown has been frustrated at the Minersville dirt oval. There was no frustration on Godown’s part last night as he went out and drove his Searock Fabrications #26 Troyer TD4 car to victory in the 25-lap Mattera’s Electrical and General Contracting 358 Modified main event. It was Godown’s eleventh career 358 modified win at the track and it couldn’t have come at a better time for the Ringoes, NJ driver.

“Man, it feels good to finally get a win here” cited Godown. “This Troyer TD4 car has been really good so far this season and I can’t thank Billy (Colton) enough for all the help he has given us to get this car to where it’s at. We’ve been fast here all season, but it’s been so frustrating even though our worst finish has been a third. I felt like I gave a couple away that I should’ve won. We’ve tweaked on the car all year long and I’ve made a couple of calls for adjustments that didn’t help early on in the year but tonight I think we hit on something. Restarts are key here and I think they’ve hurt me so far this season but tonight I was able to make the right choices and it paid off.  I have to thank Steve and Diane Searock for all they do for me and to get them into victory lane two nights in a row is pretty awesome. It was fun racing with Shawn (Fitzpatrick) and he’s going win one of these soon.”

Andy Burkhardt led the field to the green in the feature event and took the lead at the start with Shawn Fitzpatrick right on his back bumper. Burkhardt continued out in front when the first caution of the night was displayed when Jimmy Reppert backed his car into turn one and came to a stop.

On the ensuing start Fitzpatrick would take the lead with a hornet’s nest behind him as Jeff Strunk, Ryan Godown were making moves into the top five battling with Mike Lisowski and Kevin Beach Jr. Strunk was able to wrestle second away from Burkhardt as the field completed lap ten with Godown getting by as well to move into third. The final yellow of the night came out on lap eleven when Grant Hilfiger spun entering turn one as Strunk was starting to pressure Fitzpatrick for the lead.

When the race resumed it was Fitzpatrick back out to the lead. Godown was now starting to pressure Strunk for second as new players emerged into the top five with Duane Howard and Craig Von Dohren wanting to make their presence known. Godown made his move underneath Strunk on lap 16 to take second away and was making strides to catch the high-flying Fitzpatrick.

Godown caught up to the leader one lap later but Fitzpatrick was going to be tough to pass as he was hitting his marks every time. Godown continued to work the low side and was making progress every lap until he finally worked his way by the leader Fitzpatrick on lap 20 to take over the top spot. Once out in front Godown was able to put some distance between himself and Fitzpatrick to take the win. Fitzpatrick held on for second with Von Dohren making up ground on the extreme outside in the closing laps to edge Strunk for third. Strunk ended up fourth with Howard in fifth.

It was a first-time winner in the USS Achey Sportsman division with Michael Burrows taking the checkered flag in their 20-lap main event. It took three tries to get the race going but once it did the sportsman drivers put on a show for the fans. Dylan Smith led the way at the start but the eighth place starting Burrows and Doug Hendricks were on the move early on working their way to the front. Burrows starts to pressure a strong running Tyler Reber for the lead on lap seven and was able to grab the lead on the restart after the yellow was out on lap eight.

After Burrows took the lead from Reber on the restart Hendricks also moved by Reber and started to press Burrows for the lead. Burrows and Hendricks waged a hard battle over the remaining laps with contact being made along the way. But Burrows held strong holding off the determined Hendricks the rest of the way which included a couple more restarts. Alex Yankowksi finished a strong third in Chris Brennan’s #1 car after being forced to scratch his car due to problems in warmups. Wayne Witmer continued his strong season finishing fourth with early leader Tyler Reber ending up fifth.

The Savage 61 Road Runners continue to put a great show week in and week out and tonight’s feature was no exception. Kris Ney continues to impress the fans holding off a determined Mike Reichert to win the 20-lap main event. Ney had to battle with Chris Holland and Shawn Elk for lead during the middle of the feature race finally able to grab the lead on lap 14. Mike Riechert coming back from an earlier spin came on strong on the end to put the pressure on Ney but wasn’t quite able to get by. Kris Ney held off Reichert for the win with Holland, Terry Kramer and Shawn Mulhall completing the top five.

Only four cars made call for the No Sweat Service Group Street Stock main event and it was Chris Heller taking the lead on lap eleven and went on to win the feature race over Jesse Krasnitsky, Mike Radocha and Dean Hine.

Next Friday June 22nd will be the return of the URC Sprints along the 358 Modifieds, Sportsman and Road Runners.

Did not finish were Shawn Light, Nathan Mohr, Brandon Auman, Dylan Smith, Craig Whitmoyer, Ken Eckert Jr. and Logen Schultz. Did not start were Nate Klinger and Chris Brennan. The sportsman heats were won by Tyler Reber and Doug Hendricks.