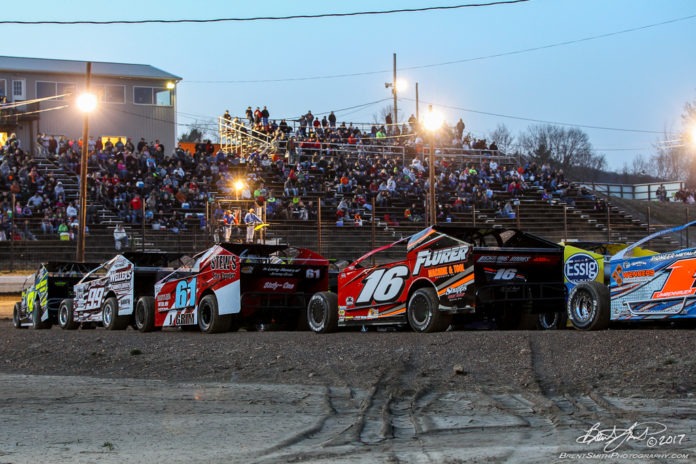 POTTSVILLE, PA – With the regular season winding down quickly and only a few shows left before the season ending Coalcracker Weekend, this week’s program will be pivotal in deciding who will be the 2018 track champions.

Hunt the Giant will be the presenting sponsor of the night’s action and will provide free ice cream while supplies last to all the fans.

The division with the closest race going on for the 2018 title belongs to the Mattera’s General and Electrical Contracting 358 Modifieds. The last race for the Modifieds saw points leader Ryan Godown failing to finish putting Duane Howard and Craig Von Dohren directly behind him and ready to make a move for the points lead. Currently Godown leads Howard by only a mere 22 points with Von Dohren sitting third only 28 points from the lead. With only three points paying races left on the schedule each night will be an important one as we go forward to see who will wear the crown in 2018.

In the USS Achey Sportsman division, it is youngster Alex Yankowski who leads the way by what appears to be a safe margin of 262 points over veteran Doug Hendricks. Hendricks has been coming on strong the past few weeks and will be looking to keep the young hot shoe Yankowski on his toes just waiting for a mistake. Wayne Witmer is another driver who has been picking up his game lately and is only 75 points behind Hendricks as he looks to make a late season move towards the front. This week the top ten in Sportsman points will compete in the Leindecker Race Engines Sportsman Challenge.

The Savage 61 Road Runners will also be in action on Friday with points leader Mike Reichert looking to rebound from a bad outing last Sunday afternoon that saw involved in an incident while leading. Reichert will be looking to get back on track as he tries to hold off Kris Ney for the points lead. This division has produced many different winners over the course of the season along with great action each and every week.

Chris Heller seems to have a safe lead in the No Sweat Service Group Street Stock division as he continues his quest for the 2018 title, but stranger things have happened and in this division you just never know what will take place in their always exciting 20-lap main event. Behind Heller the points race is very tight with Mike Radocha and Dean Hine all waiting for Heller to slip up and make a mistake.

Gates open this Friday at 5:30 with warmups hitting the track at 7:30.

General admission for this Friday is $15. Seniors are $15, Kids 11-12 are $10 with kids 10 and under admitted free. As always active military with valid ID are free.

Next Friday will be the annual “Prelude to the Coalcracker” with the 358 Modifieds competing in a 35-lap feature paying $4000 to the winner. The race will be a non-points event with 150 show-up points given out and will also feature a draw for starting spots in the heats and feature. The top ten in Modified points will also compete in “The Catering Company” Modified Challenge.