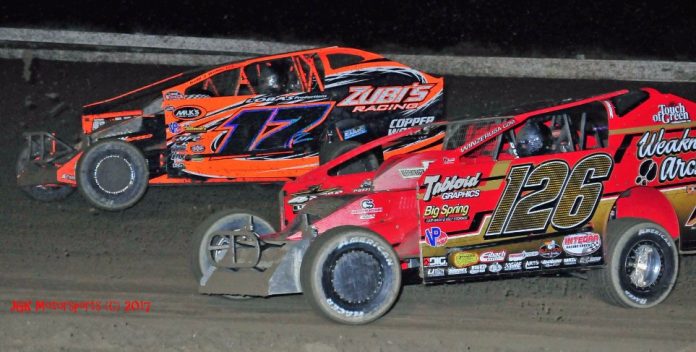 POTTSVILLE, PA – With the season winding down quickly at Big Diamond Speedway, this Friday night August 17th the annual “Prelude to the Coalcracker” race is set to hit the speedway. This traditional race is one the fans always look forward each and every year as it usually brings in some outsiders to give them a chance to prep their cars for the $10,000 to win “Jack Rich” Coalcracker race coming up on Sunday September 2nd.

The points battle in the Mattera’s General and Electrical Contracting is a fierce one with Duane Howard taking over the lead after winning last week’s main event. Ryan Godown and Craig Von Dohren are still within striking distance of the title should Howard falter.

This week’s “Prelude to the Coalcracker” race will be an open draw event with 150 show-up points being given out to all teams that attend. The race will be a 35-lap feature event paying a nice sum of $4000 to the winner. The Modifieds will also take part in The Catering Company challenge races on Friday featuring the top ten in points in a series of one on one challenge races.

The USS Achey Sportsman division will also be in competition on Friday night as 14-year-old Alex Yankowski looks to put the finishing touches on his competition as he races towards the 2018 Sportsman title. With a 240-point lead over his nearest competitor Doug Hendricks, Yankowski just needs to avoid disaster in the remaining two weeks to win his first championship.

The Savage 61 Road Runners round out the night’s events with a 20-lap feature event. After a strong start, points leader Mike Reichert has come back to the pack as he tries to hold off late season charge from Kris Ney for the 2018 title. Holding an 85-point lead over Ney, Reichert will try to solidify his spot at the top of the standings for the remaining two weeks.

General admission for Friday night is $20. Seniors are $18, kids 11-12 are $10 with kids under ten free. Active Military with ID are always free.

Next Friday August 24th will be the last regular season night of the season before we head to the season ending “Coalcracker Weekend”. Next Friday will also be the Fayash Memorial featuring a 25-lap feature event for the USS Achey Sporstman cars paying $1,570 to the winner.