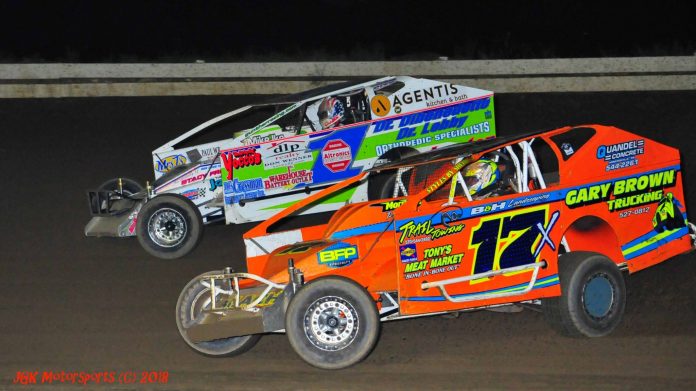 POTTSVILLE, PA –  It was a gorgeous night for racing on Friday at the Big Diamond Speedway and since opening night when Billy Pauch Jr was victorious, we finally had a feature winner in the Mattera’s General & Electrical Contracting Modified division not named Duane Howard, Craig Von Dohren or Ryan Godown. Not only was the winner a first-time winner this season but for Kevin Beach Jr it was his first career Modified victory ever at Big Diamond.

It has been a downright miserable season for Beach at the speedway. The speed has been there all year, but mechanical woes and wrecks have derailed Beach for most of the year even forcing the veteran to take off a couple of weeks to have his car repaired and to give the team a chance to reboot. That decision proved to be a good one as Beach has found some extra speed in his Bicknell #17 that propelled him to victory last night with the top three-point getters in Von Dohren, Godown and Howard all breathing right down his neck.

“Man, we needed this” said a happy Beach in the tech shed after the race. “This win ended a lot of doubt in my mind. We haven’t had any luck this year at all. Last week we bumped wheels with someone and the rear broke in half. Tonight, I started seventh and we were in second after the first lap and I thought man this thing wants to go tonight. Thank god, finally it happened. This is my fourth-year driving modifieds and when we switched from sportsman to the modifieds, we put all of our money into this. We got this new car this year and it’s been really good. I just can’t believe it, we won on the final points night. Wow, what a night! It’s been a real struggle this year and especially the last two weeks after losing my Pop. I am just so unbelievably happy right now for myself and for my crew”

Bobby Gunther-Walsh led the 24-car field to the green flag and grabbed the lead at the start. Gunther-Walsh’s good run came to end when his #1 went off the backstretch and came to a start to bring out the first yellow flag of the race. Cliff Quinn was now the leader with seventh place starter Beach now up to the second spot.

Beach took the lead from Quinn as the green flag was displayed to restart the race with ninth place starter Craig Von Dohren now up into the runner-up spot. The yellow was back out on lap eight for a multi-car tangle in turn four. After a rash of caution flags in the middle of the race we finally were able to run consecutive laps with Beach continuing to lead the way.


To the surprise of everyone, Beach was able to open up a small lead over Von Dohren as the field came back to green after multiple caution flags had slowed the pace. After a few laps Von Dohren was able to close the gap on the leader and started to put pressure Beach for the top spot. Beach held his line and was giving it all he had to hold off the track’s all-time feature winner as Von Dohren tried high and low to find a way by. As the field took the five to go sign Von Dohren had pulled almost even with Beach coming out of turn four but the determined Beach was up to the challenge and maintained the lead.

Just as he had done the previous lap Von Dohren again tried to make the pass coming out of turn four but once again Beach won the battle going into turn one to keep the lead. The last caution of the race would come out on lap 22 for a slowing Gary Hager. This was the break that Beach needed as it gave him time to compose himself and come up with a plan for the final three laps.

With the green flag back out Beach had everything under control as he was able to put a small gap between himself and Von Dohren. Beach never wavered over the final three laps and held on to pick-up the wildly popular victory over Von Dohren. Godown finished third with Howard fourth. After a season full of hard-luck Scott Albert was rewarded with a strong fifth place finish.

“When we got to the near the end of the race” stated Beach.  “I started getting stupid and I said to myself to calm down, slow down but that’s really hard to do when you have the cream of the crop running behind you. I saw Craig get alongside of me there and I said to myself what are you doing, and I just got up on the wheel and drove the heck out of it. Craig is the best of the business here and I knew I had to run perfect laps to hold him off. The caution flag (with three laps to go) helped so I could settle myself down.”

While the battle for the win was going on there was another internal battle going on for the track title between Von Dohren, Godown and Howard. Howard was the points leader going into the night with Godown lurking closely behind just waiting to make a move. Von Dohren was mathematically still in the hunt but for him to win it would’ve taken disastrous nights by both Howard and Godown for him to pull it off. Howard knew going in that for him to win the title he would only have to keep Godown in his sights and the title was his. Howard was able to maintain a top five spot throughout the second half of the race to capture the track title. The title was Howard’s eight career points championship at the Schuylkill County oval and 23rd career overall track championship.

“It feels great to win the championship” cited Howard afterwards. “Norm gives me and the team everything we need to be competitive and this year we had a great year here at Big Diamond. Championships are about the team, not the driver and winning this championship shows just what a great team we have here on the #357.”

Craig Whitmoyer started on the pole by virtue of the draw and grabbed the lead right from the start. Multiple cautions on lap three forced the officials to call for a single file restart to get the race back underway. Yankowski was on the move early from his 19th starting spot and entered the top five with only five laps in the books. The division’s latest winner Dave Dissinger was also on the move and into second on lap seven.

After a lap nine caution Dissinger takes the lead over Whitmoyer with Yankowski now up to third. Another caution flag slowed the race on lap 13 with Dissinger again taking charge on the restart as Shawn Light gets by Yankowski to move into third. After a lap 17 caution, the race takes a major turn of events. On the restart Dissinger and Whitmoyer make contact going into turn three with Whitmoyer ending up against the outside wall with a broken front end. As per track rule, since Dissinger was determined to be the cause of the caution and Whitmoyer not being able to continue. Dissinger was sent to the pits done for the night.

That was the break Yankowski needed as he was able to power by Light on the restart and go on to take the checkered flag over Light. Nate Klinger, Billy Osmum III and Daryl Dissinger completed the top five.

Jason Geesaman once again was victorious in the No Sweat Service Group feature event. Jeff Haag took the lead on lap one. Geesaman was on the move early and into the second spot on lap five. Haag was able to hold off Geesaman until lap 14 when Geesaman went by to take the lead and go onto the win. Completing the top five were Ryan Smith, Jeff Haag, Kyle Saylor and Chris Derr.

The Savage 61 Road Runners put a good show for the fans in their 20-lap main event with Chris Holland holding off Andrew Fayash in a great battle over the last eight laps to take the win. Matt Ney was third with Jim Kost and Mike Reichert completing the top five.

The modified heat races were won by Jared Umbenhauer, Scott Albert and Frank Yankowski. The consolation was won by Jimmy Reppert.

The Sportsman heat races were won by Wayne Witmer, Kris Lilick and Nate Klinger. The consolation was won by Alex Yankowski. Did not qualify were Jeremy Hertzog, Chris Brennan, David Dunker, Ed Mrochko and Logen Schultz.