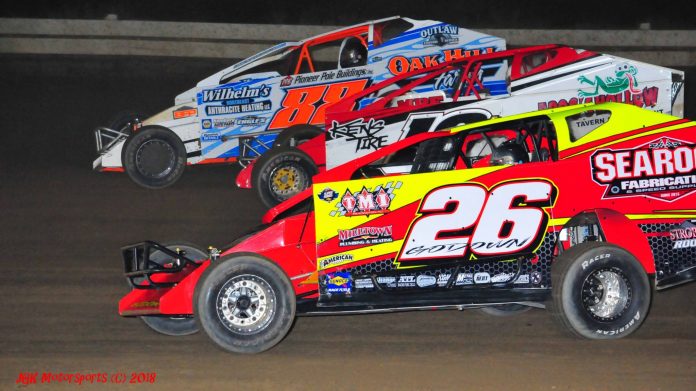 POTTSVILLE, PA – It’s the time of year us fans of Big Diamond Speedway both love and hate. We love it because it is the race we look forward to each and every year but on the other hand we hate it because we know the racing season at the speedway is coming to a close!

Yes fans, it is Coalcracker Weekend 2018 at Big Diamond Speedway. On Friday August 31st and Sunday September 2nd, the 2018 racing season at the Big Diamond Speedway will culminate with its biggest weekend of the year. In a season that’s been dominated by Mother Nature, let’s hope she gives all of us drivers, teams and fans some nice weather as we look to close out the season up here in God’s country with a bang.

The big weekend gets underway on Friday 8/31 with Leindecker Race Engines night. The USS Achey Sportsman cars will take part in the “Coalcracker 40” paying $1800 to win and $160 to take the green. The Sportsman division has been dominated by 14 y/o Alex Yankowski who seems to have a safe advantage in the race for the 2018 Sportsman track title. Jack Butler winner of the big $5000 Sportsman Summer Classic will be on hand to try and sweep the track’s two major Sportsman races. Friday’s race for Sportsman will be a draw race with 150 show-up points being given out to all participants.

Also, on the card for Friday night will be the Savage 61 Road Runners, No Sweat Service Group Street Stocks, Vintage Cars, Central PA Legends and the Enduros. Friday night will also be the last points race for the Street Stocks. As always there will be a non-winners race for the 358 Modifieds with the winner of the 15-lap feature automatically receiving a redraw spot for Sunday’s big Coalcracker race. With the Modifided season being dominated by three drivers, this leaves plenty of big name drivers available to run in Friday’s night race. Jeff Strunk, Ryan Krachun, Frank Yankowski, Jimmy Reppert and Frank Porreca are just a few of the many drivers eligible.

*Entry forms for the Coalcracker Sportsman race are available on the track’s website.


Friday’s racing will get underway at the usual time of 7:30pm with the gates opening at 5:30pm.

General admission for Friday will be $14, Senior admission is $12. Kids 11-12 are $10 with 10 and under being admitted free. As always, active military with ID are free.

Once Friday night’s racing card is in the books, it will be time for the Granddaddy of events for the speedway as Jack Rich, Inc presents the $10,000 to win “Coalcracker 72” for the Mattera’s General and Electrical Contracting 358 Modifieds on Sunday, September 2nd.

The Coalcracker race has been a staple of Big Diamond Speedway since 1979 with a who’s who of modified drivers participating in the track’s marquis event. The race has taken on a few different distances over the years ranging from 50 to 100 laps to the current distance of 72 laps.

Leading the way with a total of seven Coalcracker victories is the “Diamond Cutter” himself Duane Howard who is also the defending champion of the event. Howard has had a tremendous year so far this season at Big Diamond with the Norm Hansell #357 winning a total of four races including the “Money on the Mountain” race back in the beginning of the season. Howard was also crowned the 2018 Big Diamond points champion this past Friday night at the speedway. Howard would like nothing better than to add an eighth Coalcracker victory to his trophy case.

The “Bechtelsville Bullet” Jeff Strunk is next in line with a total of four Coalcracker wins and would like nothing better to win his fifth this year. Strunk has had an absolutely dismal year at Big Diamond this season and winning the season ending race would go a long way to alleviate the bad luck the Glenn Hyneman #126 team has had to endure in 2018 at Big Diamond.

Behind Howard and Strunk with three wins apiece among active drivers are Craig Von Dohren and Ryan Godown. Both “CVD” driving the Dave Dissinger #88 and the “Ringoes Rocket” aboard the Searock Fabrications #26 have had outstanding seasons so far at Big Diamond and would like nothing more than to close out 2018 standing in victory lane holding the big $10,000 check. Other drivers with three Coalcracker wins each are Charlie Eckert and the late Doug Hoffman.

There are two drivers who have won the big race twice and both are legendary drivers in the Modified world. Those drivers would be Billy Pauch Sr and Kenny Brightbill. As of this writing it is not known if Billy Pauch will be in the field to add to his totals. There are nine drivers who each have one victory in the Coalcracker. Those drivers with one victory apiece are Bob Emerich, Paul Koch, Fred Rahmer, Richie Tobias, Rick Schaeffer, Billy Schinkel, Tom Mayberry, Keith Hoffman, Doug Manmiller and Matt Sheppard. Out of those nine drivers, only Doug Manmiller is expected to be in the field looking to add to their total.

The 2018 Jack Rich, Inc “Coalcracker 72” looks to be a battle amongst the track regulars once again with the trio of Duane Howard, Craig Von Dohren and Ryan Godown leading the way. There are a group of other track regulars who would like nothing better that to get their first win of the year at the speedway with that group being led by the always consistent Ryan Krachun. Coming off a big win at New Egypt Speedway last Saturday night, Krachun would like to make his first Big Diamond win a memorable one. Both Frank Yankowski and Mike Lisowski have come close on occasion to getting wins this year and both should be in the mix for the checkered flag. Other track regulars who have shown speed throughout the season are Shawn Fitzpatrick, Kevin Beach Jr, Frank Porreca and Jimmy Reppert .

Drivers who have been semi-regulars during the year include Billy Pauch Jr, John Willman and Jared Umbenhauer. Pauch Jr started out the year on a high note by winning on opening night in his “Kid Racing” #15 but since then has had nothing but bad luck. Willman has shown speed when at the track, but mechanical woes have taken him out of some very good finishes. Umbenhaurer started out the year as a Big Diamond regular and was showing speed but after destroying his Grandview car during the summer, the team elected not to race on Friday night’s but is expected to be back for the Coalcracker.

Some outside drivers expecting (but not confirmed) to invade the speedway to try and steal the money away from the home town boys are “Flying” Ryan Watt, Rick Laubach, Frank Cozze, Brett Kressley, Doug Manmiller, and Danny Bouc. Former Big Diamond Sportsman champions Matt Stangle and Brandon Grosso are also expected to make the haul back to their former Friday night haunt looking to win their first ever Modified race. Watt, Laubach, Kressley, Cozze and Manmiller have all won races at the Schuylkill County dirt oval with only Manmiller being a former winner of the Coalcracker. All of the above listed drivers have plenty of experience at Big Diamond with Laubach being a former track champion.

Although the Jack Rich, Inc. “Coalcracker 72” is the main event on Sunday, there will be plenty of other action going on at the speedway. The USS Achey Sportsman division will crown a champion on Sunday night along with the Savage 61 Road Runners. Rookie Alex Yankowski currently leads the way in the Sportsman division looking for the title in his first ever season at the speedway. The Road Runners will take part in a feature only format on Sunday. Mike Reichert is the leader in the Road Runner division and looks to be in a good position to hang on and win the 2018 championship. Rounding out the racing card on Sunday will be the 600 Modifieds.

*Entry forms for the Jack Rich, Inc. “Coalcracker 72” race are available on the track’s website.

Gates open a 4:00pm on Sunday with warmups starting at 7:15pm, racing will get underway at 7:45pm

General admission for Sunday is $30. Kids 6-10 are $10 with kids under 6 free. Active military with ID are admitted free of charge.