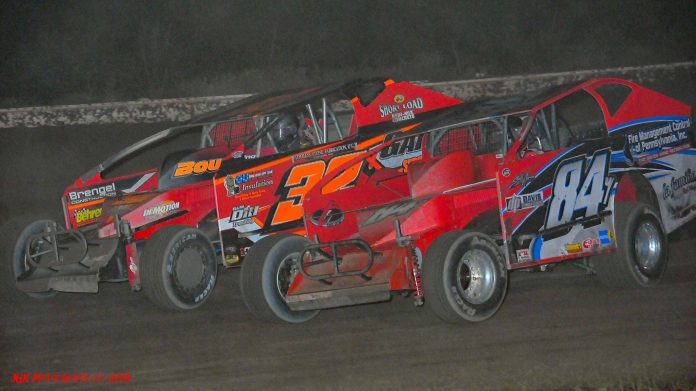 MINERSVILLE, PA – This Friday night April 12th will be go time at the Big Diamond Speedway as the track nestled up God’s country will swing open the gates as they begin their 2019 season with some extra cash on the line for both the Insinger Performance 358 Modifieds and the USS Achey Sportsman. It will be the 48th season of operation for the speedway and it promises to be the most lucrative in the track’s history.

The new clay surface that was put down over the winter has melded nicely and has received thumbs up from the competitors after two successful practice sessions. The additional lighting through turns three and four has been installed and ready to go as we approach the new year.

The new season will get underway this Friday night as part of Schaeffer’s Motorsports night highlighted with a 30 lap $4,000 to win feature event. The Sportsman cars run a 20 lap $1,000 main event as the undercard. Also, in action this Friday will be the No Sweat Service Group Street Stocks along with the Savage 61 Road Runners.

The 2019 Modified season looks to be the most competitive in years with plenty of new and returning talent calling Big Diamond Speedway home on Friday nights. Former track champions Rick Laubach and Billy Pauch Jr lead the way of returning drivers along with multi-time speedway winner Brett Kressley. Last year’s rookie sportsman sensation Alex Yankowski is making the move up to the Modifieds in 2019 looking to continue his success. Other drivers who have expressed their intentions to call Big Diamond home in 2019 are the veteran Frank Cozze, Kyle Merkel, Steve Young, Dale Hartz, Justin Grim as well as former and current New Egypt drivers Tim Apgar, Willy Osmum III and 2017 Big Diamond Sportsman champion Matt Stangle.

All of those new and returning drivers will have stiff competition from the Big Diamond regulars who will be very reluctant to relinquish their status as the ones to beat. 2018 track champion Duane Howard leads the way along with former track champions Ryan Godown, Craig Von Dohren, Jeff Strunk and Billy Pauch Jr. The speedway also has plenty of other talent all looking to make that next step up to contend for wins and championships. Kevin Beach Jr, Frank Yankowski, Shawn Fitzpatrick, Frank Porreca, Scott Albert, Ryan Krachun, John Willman and Mike Lisowski are just some of the drivers seeking fame and glory at the speedway. It will definitely be year for the record books and one that will provide the fans with plenty of water cooler conversation.

General admission for this Friday is $20. Kids 10 & under and active military with valid ID are admitted free of charge.

Once opening day is completed, all focus will be on the annual “Money in the Mountains” race set for Friday night April 19th. This year’s race sponsored by Fire Management Control of Pennsylvania, Inc will be the biggest to date with the winner of the feature event receiving $10,000. This year’s MITM race will be run under the rules of the Brett Deyo Short Track Super Series (No Sail Panels).