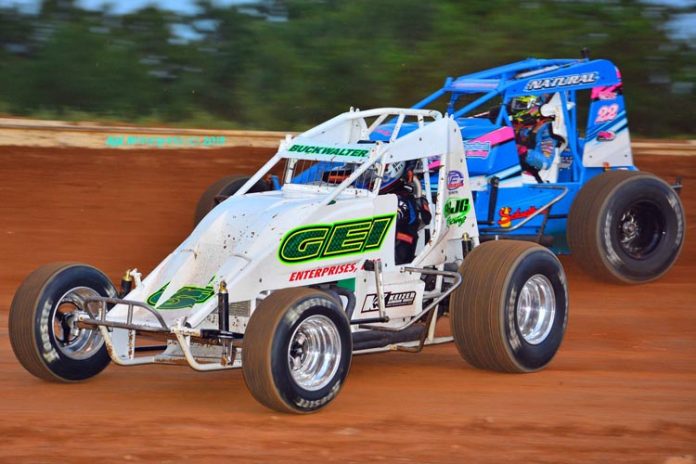 MINERSVILLE, PA – With picture perfect weather adorning the speedway highlighted by a stunning sunset, the action was just as good on the track Friday night at the Big Diamond Speedway. With the Insigner Performance modifieds given the night off, the spotlight on the night was the USAC Wingless 360 sprints. Another good field of sprinters were on hand Friday night with Tim Buckwalter taking home the win.

Chandler Leiby took the lead from his pole starting spot with Buckwalter starting to charge to the front. When the caution flag was displayed on lap nine, Buckwalter was already up the to the second spot. Buckwalter outgunned Leiby on the restart to take command of the race. While Buckwalter remained out front the battle was raging on behind him for second between Leiby and the May 24th winner of this race Steve Drevicki. Drevicki would take over second from Leiby on lap 19 and start to reel in your leader Buckwalter. A caution on lap 22 would bunch of the field and give Drevicki one more shot to make it two in a row at Big Diamond.

Buckwalter would retain his lead on the restart and go on to take the checkered flag over a close running Drevicki with Carson Short, Carmen Perigo and Leiby rounding out the top five.

The USS Achey Sportsman were up next to take part in there 20-lap main event. Pole sitter Daryl Dissinger would take the lead on lap one. Dissinger’s lead would be short lived as his car suddenly slowed with problems setting of a hard crash as Tyler Reber with nowhere to go hits Dissinger’s disabled car hard and ends up on top of Dissinger’s No. X5 causing the red flag to be displayed. Thankfully all drivers were okay.

Newcomer Michael Toth takes the lead on the restart with a hard-fought battle taking place behind for the runner-up spot between youngster Cole Stangle and two time winner already this season Doug Hendricks. Hendricks finally was able to wrestle away the second spot from the teenager Stangle. A lap 15 caution flag would be the break Hendricks was looking for to bring him closer to the leader Toth. On the restart it was all Hendricks as he would take away the lead and go on to win his third feature in a row at the speedway. Toth ended his impressive run in second with Stangle, Whitmoyer and Light completing the top five.


Kody Sites would take the win in the Eash’s Towing & Recovery Street Stock division. Sites lead lap one with Jeff Haag on the move early on. Haag would take the lead away from Sites on a lap seven restart and continue to lead the way until the motor let go in Haag’s No. 454J handing the lead back to Sites. Sites would continue to lead the remainder of the race with Eric Tripp, Elvin Brennan, Robin Wagner and John McGeoy the top five.

The Savage 61 Road Runners put on quite a show for the fans with Matt Ney taking the win. Kris Ney would take lead on the start. Kris Ney would continue to stretch his lead with Matt Ney moving into second on lap five. Matt Ney continued to run down the leader lap after lap and caught the leader as the two to go sign was being displayed. The two drivers would race the remaining two laps of the race side by side leaning on each other with Matt Ney coming out victorious by a half a car length at the finish over Kris Ney. Chris Holland, Shawn Mulhall and Fred Everly completed the top five.