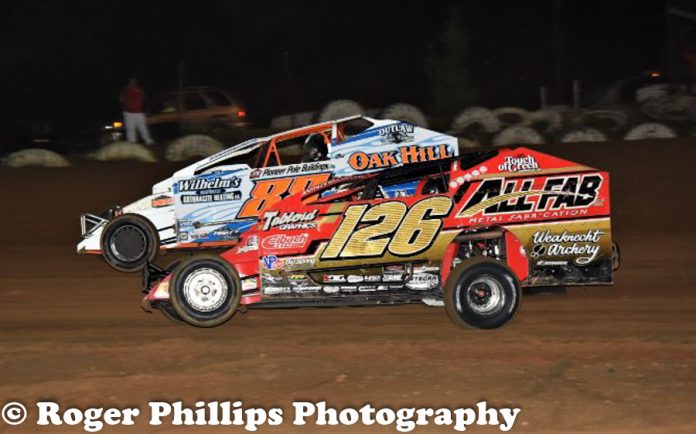 MINERSVILLE, PA – A big weekend of racing is set to take place this Friday and Sunday at the Big Diamond Speedway culminating with the running of the Jack Rich, Inc. Coalcracker 72 on Sunday September 1st for the Insigner Performance Modifieds. This year’s end of the year spectacular will pay a whopping $17,000 to the winner making it the highest paying Coalcracker race ever run at the speedway.

But before Sunday’s events take place, the Coalcracker weekend will get underway on Friday night August 30th highlighted by 40-lap $1800 to win feature race for the USS Achey Sportsman. The night will get underway with a free pig roast for everyone while supplies last.

The premier event of the night on Friday will be the Sportsman Coalcracker 40. Points leader Doug Hendricks will be the driver to beat as he has racked up multiple feature wins in 2019 and has been the cream of the crop thus far. Brendan Edgar who also has multiple wins will have something to say about that as he looks to finish his 2019 Big Diamond Speedway run with a big win. Other drivers looking to cash in on Friday night include Wayne Witmer, Cole Stangle, Mike Schneck, Dakota Kohler and many others. Look for some invaders to enter the field on Friday like Brad Brightbill who invaded Big Diamond only a few short weeks ago and walked out with the feature win.

Also, on the card for Friday’s portion of Coalcracker weekend will be the Savage 61 Road Runners, the Eash’s Towing & Recovery Street Stocks, the Central PA Legends, Enduro along with the Vintage Cars. There will also be a Modified practice added to Friday’s schedule.

Gates will open on Friday at 5:30pm with warmups getting underway at 7:15pm, the first race of the evening will get underway at 7:45pm.


Admission prices for Friday night are as follows: General Admission is $15; Kids 11 & 12 are $10. Kids 10 and under are free along with active military with valid ID.

Once Friday’s racing card is complete, all eyes will turn to Sunday’s Jack Rich, Inc. Coalcracker 72 as the Insigner Performance Sunoco Racing Fuel Modifieds will take to the 4/10’s mile red clay oval all looking to take home the $17,000 winner’s share of the purse. Along with the $17,000 first-place prize, the race will also pay $1000 for tenth with $500 to take the green flag.

2019 Big Diamond Speedway Modified champion Craig Von Dohren has to be the odds-on favorite to take home the big prize. Von Dohren has four wins on the season at the speedway including the $10,000 to win “Money in the Mountains” race back in May. Von Dohren has struggled the past two weeks but you can always expect the Oley, PA driver to be at the top of his game when the big money is on the line. Von Dohren aboard the Dave Dissinger No. 88 is a three-time winner of the Coalcracker.

The all-time leading winner of the Coalcracker race is none other than the “Diamond Cutter” himself Duane Howard. Howard who has one win this season at the speedway has been a model of consistency and has gotten stronger as the year progressed. Other former winners expected to be in the field on Sunday night are Jeff Strunk (3 CC wins), Doug Manmiller (1 CC win) and last year’s first-time winner Danny Bouc.

Three long-time veterans of the speedway Rick Laubach, Billy Pauch Jr and Frank Cozze are also expected to be in the mix for the win and it would not be a surprise to see anyone of them standing in victory lane at night’s end holding up the big check and notching their first ever Coalcracker triumph.

Last week’s “Prelude to the Coalcracker” third place finisher Mike Gular has confirmed he will be in the field wheeling the Terry Fastnacht No. 2A aiming for the big prize. Track regulars who will also be looking to end their Big Diamond season with a bang are rookie Alex Yankowsk, Jared Umbenhauer, Kevin Beach Jr, Ryan Krachun, Matt Stangle, Nick Rochinski and Shawn Fitzpatrick along with a host of others.

Also, on the program for Sunday night will be the final points events of the year for the Savage 61 Road Runners and the Eash’s Towing & Recovery Street Stocks. The 600cc Modifieds will also be in action on Sunday.

Pit Gates will open on Sunday at 2:00pm with the grandstands opening at 3:00pm. Hot laps will start at 7:15pm with racing getting underway at 7:45pm.

Admission prices for the Sunday Jack Rich, Inc. Coalcracker 72 will be as follows: General Admission is $35, kids 11 – 12 are $15. Kids 10 and under are admitted free of charge as are any active military with a valid ID. Pit admission for Sunday will be $40.

**Entry forms for the both the Sportsman Coalcracker 40 and the Modified Coalcracker 72 can be found on the Big Diamond Speedway website.