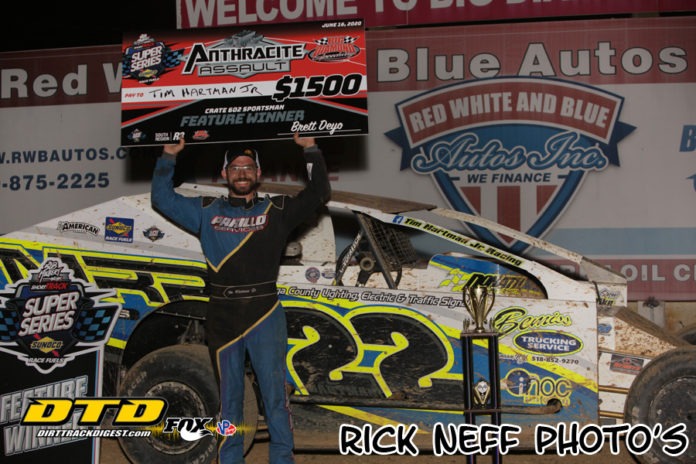 MINERSVILLE, PA – Tim Hartman got the win at Big Diamond Speedway on Tuesday night beating Michael White in the final two laps for the $1,500.

The green flag came out at Big Diamond as Michael White and Daryl Dissinger took the field into turn one.

It was three-wide early as Ryan Conrad, Brad Roberts and D.J. Hunt battled inside the top five.


Green came back out, but another caution flew as a big pile up down the backstretch occurred as Tanner Van Dorn, Erik McKinney and others were involved.

Green came back out with Dissinger pounding the wall ending his night.

When green came back out and Weiss moved up to second behind White.  Hartman moved up to fourth at this point.

Toth got by Kohler for second on lap nine as White continued to lead the way.

Another caution was necessary on lap fly as McKinney went around on lap 10.

By lap 15, White’s got wider as Toth and Hartman made contact racing hard for position.

Another caution was needed on lap 19 as Daniel Morgiewicz hit the the tire on the backstretch causing front end to break.

When action resumed, White led the way with Toth in tow.  One lap later, Hartman got by the Toth for second.

With two laps to go, Hartman began applying pressure to White.  A lap later, Hartman got by White to go on to win at Big Diamond.