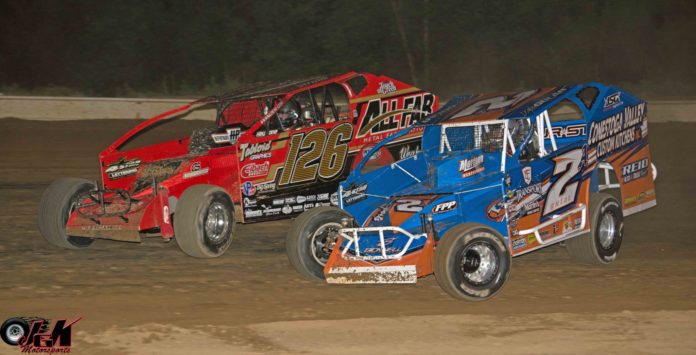 MINERSVILLE, PA – Eddie Strada seemed to be well on his way to his first 358-Modified victory, running a masterful race in the 25-lap feature. However, Mike Gular had other plans, snatching the lead with three laps left to take the win.

Strada led Colt Harris through the opening laps of the 358-Modified event, with Strada flexing his muscle early and often. With every lap, Strada put more distance between himself and Harris, by about a second on lap five, and nearly three seconds by lap ten. Harris had a handful, with Doug Hendricks and Duane Howard breathing down his neck. Looking further back, Alex Yankowski was rolling strong and was up to fifth.

Strada was on cruise control out front, with a big lead over a hound of cars fighting for second at halfway. A lap 16 yellow changed the race dramatically, erasing Strada’s lead and bunching up the field. Harris got an awful restart, also hurting Howard, with Harris slipping to fourth and Howard fifth.

On lap 17, Hendricks and Yankowski got together, with Hendricks going around and collecting Howard. This called for another restart, with Strada now leading Yankowski and Billy Pauch Jr. After winning the Short Track Super Series event on Tuesday, Pauch looked poised for a second win of the week, but Gular blasted by and into third soon after the restart.

Strada didn’t have any more breathing room out front, with Yankowski all over his rear bumper. Yankowski took a swing at the lead with five to go, but missed the bottom while taking his shot. Gular took advantage and muscles under Yankowski, immediately applying pressure on Strada.

A lap 22 yellow ruined all of Strada’s fun post-race plans. Gular restarted up top, but got a massive launch and beat Strada to the bottom of turn one, taking the lead away. Strada missed his marks and Yankowski took second, but Gular was long gone out front. When the checkered fell, it was Gular winning over Yankowski, Strada, Pauch Jr., and Jeff Strunk.

“I just knew we had to get to the bottom on the restart,” Gular said. “These Spec-358s just don’t have enough motor to get around the top on a track like we had tonight, so I took a shot that would get me to the bottom. I got him, but Strada did really good, he’ll be a problem all year. We had a bunch of top fives coming into tonight at a bunch of other tracks, and I wasn’t going to settle for another fifth.”

Did Not Qualify – Ray Swinehart and Ron Haring Jr.

Did Not Start – Jonathan Robinson.