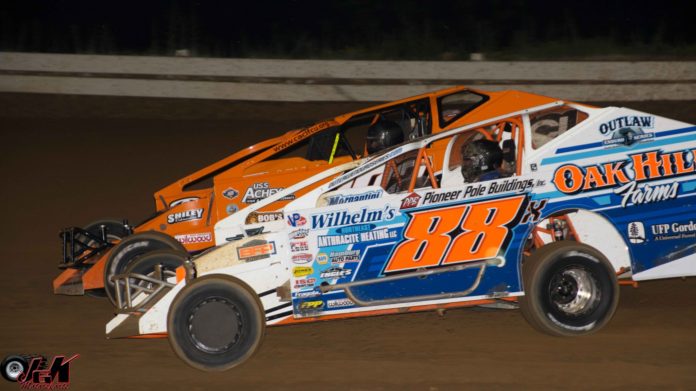 MINERSVILLE, PA –  It was another beautiful night for racing at the Minersville, PA dirt oval on Heller’s Gas night. With another large crowd on hand for the third consecutive week, Craig Von Dohren was finally able to grab his first win of the season with a dominating performance in the Insigner Performance Modifieds. The USS Achey open sportsman were back in action with Glenn Rowan winning his first ever career victory. Kody Sites won his first of the year in the Heller’s Gas Street Stocks and Mike Reichert also won his first of the year in the Red White and Blue Autos Roadrunner division.

With some extra money on the line for the Insigner Performance Modifeds you knew Craig Von Dohren will be the man to beat and on this night the man referred to as “CVD” did not disappoint. Cory Merkel and Shawn Fitzpatrick brought the field to green with Merkel getting the initial jump and taking the over the point.

A lap one yellow for Tim Apgar slowed the pace and, on the restart, Fitzpatrick took over the top spot with Merkel and fifth place starting Duane Howard quickly on the charge. Lap two saw starter Jeff Merkel put out the red flag when Ron Haring Jr rolled his No. 13 over in turn three. Thankfully, Haring was okay. Back to green and Fitzpatrick was back in front now with Howard who had moved by Merkel in hot pursuit. An extremely hard charging Von Dohren who had started in the eleventh spot was now up to third and looking for more when the yellow was once again put out for Merkel who slowed.

Fitzpatrick still led as the race resumed and one lap later Von Dohren went by Howard for second now setting his sights on the leader Fitzpatrick. Now it was a fierce battle for the lead with Fitzpatrick trying to hold off the advances of Von Dohren. Von Dohren would try down low coming off turn four only to have Fitzpatrick hold him off lap after lap. On lap ten the two leaders came of the turn and down the front stretch side by side virtually even with Fitzpatrick gaining the edge going into turn one. Before the lap could be completed a yellow was thrown with everybody still thinking Fitzpatrick was the leader but scoring showed that Von Dohren had been scored first as they scored lap ten thus making him the leader.

Once in front, Von Dohren would show no mercy on the field and he streaked to his track leading 97th career victory at Big Diamond taking home the $4000 top prize. Fitzpatrick and Howard would put on a great battle for second with Fitzpatrick able to edge out Howard at the end. Last week’s winner Mike Gular made a late race charge for fourth with Billy Pauch Jr completing the top five.

“We had a good car tonight, we struggled a little bit in the heat race but were able to make it into the inversion which is very important here,” cited Von Dohren in victory lane with track announcer Dino Oberto. “I have to thank Dave Dissinger for giving us a good car and Jason Bashore who works on it every week. Oak Hill Farms and Pioneer Pole Buildings are great sponsors along with our product sponsors. He (Shawn Fitzpatrick) was very fast on the straightway and was able to get the momentum off the turns to stay in front. I didn’t know I had the lead there on that yellow until they said something on the radio, so I switched to the bottom lane for the restart. After that I just wanted to hit my marks and keep it straight.”

The USS Achey Sportsman cars went non-stop for 20 laps in their main event with polesitter Glenn “Buckshot” Rowan leading the entire way to win his first ever career sportsman feature and Rowan picked a great night to win as the winners share was boosted to $1500 as part of the Kamp Memorial.

Rowan took the lead from the onset of the green and pulled out to a comfortable lead while the pack battled behind him. As the race approached the midway point it was Rowan still with a nice lead as Blake Reber, Matt Clay and David Burns were putting on a show all battling for the second spot. Burns finally wrestled the runner-up spot away and now was on a mission to catch the leader Rowan. Burns was blasting the top trying to catch the leader as the laps wound down. Burns was cutting down the lead quickly but ran out of time as Rowan crossed under the checkered flag with Burns only one car length behind finishing second. Clay finished third with 12th starter Brad Brightbill in fourth. Reber rounded out the top five.

In the 20-lap Heller’s Gas Street Stock feature, it was pole sitter Dan Hoffman taking the lead at the start. Chris Derr from third would take away the lead on a lap eight restart only to drift high allowing Hoffman to take the lead back. Midway point of the race finds opening night winner Jason Geesaman and Derr both dropping out of the race with front end issues. Hoffman continues to lead the way as Ryan Smith starts to apply the pressure, but Smith also finds himself with front end issues and drops out with six to go. Kody Sites who had made an early race pitstop now finds himself up front battling with Hoffman and on lap 14 takes over the top spot. Sites goes onto win over Hoffman, Eric Tripp, Jeff Haag, and Robin Wagner.

The Red White and Blue Autos Roadrunners 20-lap main event was also a non-stop affair. Seth Reichert would bring them down to the green and take the lead at the start. However, former champion and fourth starting Mike Reichert was quickly on the charge and on lap two took the lead away from his son and set sail on the field. While the elder Reichert was on cruise control the battle behind him for spots second thru sixth was insane and a real crowd pleaser. The younger Reichert along with Matt Ney, Kevin Holland, Terry Kramer, and Alex Schoffstall were all running under a blanket racing hard and clean. When it all shook out it was Mike Reichert with the win followed Ney, Seth Reichert, Kevin Holland, and Schoffstall. I will tell you; the roadrunner division never fails to disappoint the crowd!

Next Friday night it will be the Georgie Stevenson Memorial with another $4000 awaiting the winner of the 30-lap modified feature. Friday will also be the season debut for the USAC Wingless 360 Sprints. Friday night’s racing card will also have the Open Sportsman vs the 602 Sportsman along with the Roadrunners. Plus, Fireworks.

Did Not Start – Chuck Eckert

Did Not Start – Jon Schlauch