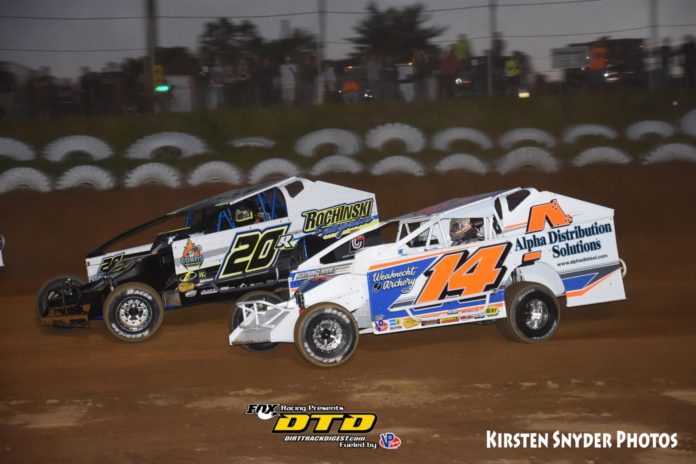 MINERSVILLE, PA – It will be huge night of racing action this Friday July 3rd at the Big Diamond Speedway with the track’s annual presentation of the Georgie Stevenson Memorial on B&H Landscaping Night. The Insigner Performance Modifeds will compete in a 30-lap main event with the winner receiving a $4,000 payday. Last Friday’s winner Craig Von Dohren will be looking to make it two in a row and is also the defending winner of the Georgie Stevenson race.

Georgie Stevenson was an avid fan of the Big Diamond Speedway along with his family. Georgie and his family supported the speedway religiously each week. Sadly, Georgie was diagnosed with cancer at a young age and while fighting the dreaded disease, the young man worked hard to raise money for cancer research. Georgie’s battle with cancer concluded at the age of twelve when the courageous young man passed away. Georgie loved the sport of dirt racing especially at his home track, the Big Diamond Speedway.

Also, competing on Friday night will be the Rapid Tire USAC Wingless Sprints as they make their Big Diamond debut in 2020. This will be the second race of the season for the traveling club with their season set to get started this week. Last year’s races were very exciting and look for the same to take place on Friday.

If you must pick out a division that week after week puts on the best feature of the night at Big Diamond, look no further that the Red White and Blue Autos Roadrunners. The past three weeks, this division has put on some of the best racing scene anywhere. Last Friday night you could have put a blanket over the first six positions as they battled hard and clean while racing for the win. Do yourself a favor, if you are one who generally gets up to take a walk during the Roadrunner feature. Stay in your seat this week and watch. I guarantee you will not be disappointed.

In celebration of our nation’s birthday, promoters Jake and Jasmine Smulley will present a huge fireworks display during the night.

The event will be broadcast exclusively on Dirt Track Digest TV.  You can purchase the event for $24.99 by CLICKING HERE.

Gate will open on Friday night at 5:30pm with warm-ups hitting the track at 7:15pm, Racing will get underway at 7:45pm.

General admission for this Friday will be $25, Seniors admission is $23, Kids 10-11 are $10 with kids 10 and under admitted free. Active Military with a valid ID are free.