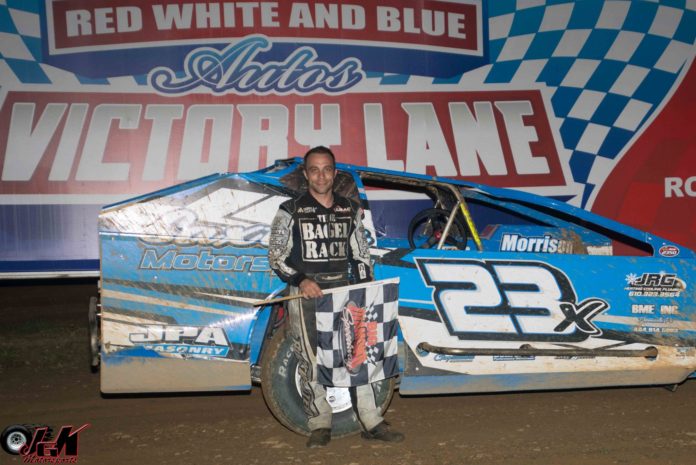 MINERSVILLE, PA – It was another fight with mother nature on Friday night at Big Diamond Speedway but once again the track won out and rewarded the large crowd on hand a great night of racing. Rain came through the area around 6pm making for a late start but the track crew was ready for it and had the track back in racing shape quickly after the rain had stopped.

Along with it being the Georgie Stevenson Memorial night, our friends from B & H Landscaping were on hand as the title sponsor for the night. Two weeks ago, it was Mike Gular who ended a long victory drought at the speedway and this Friday night Timmy Buckwalter was the driver who ended his long absence. Buckwalter had last won at the Minersville, PA dirt oval back in August of 2013. Showing speed each week at the speedway, the Norm Saxton No. 23X team had suffered from some mechanical issues that have prevented the talented driver from winning. Last night, the team had no issues whatsoever as Buckwalter dominated the second half of the race after taking the lead from Mike Lisowski.

Cory Merkel and Colt Harris led the 24-car field to the green flag for the Insigner Performance Modified 30-lap main event. Merkel would jump to the lead at the start but outside pole-sitter Harris would roll to a stop after the completion of lap one slowing the action. Mike Lisowski would take the lead away from Merkel on the restart. The race would slow once again as now Merkel would bring out the yellow. Lisowski would continue to lead on the restart with Timmy Buckwalter taking over the second spot. It was caution fever early on as points leader Mike Gular slid to a stop against the yuke tire going into turn one with Nick Rochinski piling in.

A major tangle on the ensuing restart saw the cars of Frank Yankowski, last week’s winner Craig Von Dohren, Duane Howard and Kris Graver all involved. All drivers would be able to continue except for Yankowski. The long caution enabled Gular to make repairs and rejoin the field. Once we returned to racing, Lisowski was still able to take charge but now Buckwalter was pressing the issue and took over the top spot from Lisowski on lap eleven.

Buckwalter would continue to lead the way as second place runner Lisowski was now under pressure from Jeff Strunk who was racing the Butch Getz No. 15 Bicknell on this night due to the Glenn Hyneman No. 126 team having issues with the motor in the Big Diamond car. Fan favorite Billy Pauch Jr brought out the yellow on lap 19 with a right rear flat on his self-owned No. 15. Pauch rejoined the field after a quick pit stop for a new tire.

Buckwalter continued to lead the way as the field went back to green with Strunk working on Lisowski for second. Lap 23 saw Strunk work his way by Lisowski to take over the runner-up spot. Buckwalter was not going to be denied on this night as survived a couple more restarts to go on and win by a comfortable margin over Strunk, a strong running Brett Kressley who ran the last few laps with a left front flat finished third. Shawn Fitzpatrick backed up his second-place finish last week with another solid fourth-place finishing. Rounding out the top five was Craig Von Dohren coming from the back after the early incident.

“This car has been fast everywhere we have run it and tonight was no exception,” said a happy Buckwalter as his car was going through post-race tech. “We finished seventh here the first night and then the next week we broke a u-joint and last week it was driver error when I hit the yuke tire, but we made up for it tonight.”

It was a good night / bad night scenario for Buckwalter who earlier in the night crashed hard with the No. 5G wingless sprint when a part broke sending him into the fourth turn wall.

The Rapid Tire USAC Wingless Sprint cars made their Big Diamond Speedway debut on Friday night and at the end of the night it was once again Stephen Drevicki picking up the checkered flag. Drevicki won two out of the three races held at the speedway last year and continued his winning way as he was the class of the field this night. It was the second win in two nights for Drevicki who won the previous night at the Orange County Speedway.

Pole-sitter Bill Unglert led the field to the green flag and took the lead at the start. Unglert continued to lead the way early on. The race was halted when the No. 00 of Danny Varin flipped out of the track in turns three and four bringing out the red flag. Varin was quickly out of the car and okay.

When the race resumed Drevicki was now in the runner-up spot and was applying the pressure to leader Unglert. As the leaders started to hit lapped traffic Drevicki saw his opportunity and was able to take the lead from Unglert on lap 15. Once in front, Drevicki kept his car up on the cushion and easily pulled away for the win. Joey Biasi was able to get by Unglert for second on lap 21 but had nothing for the high flying Drevicki. Following Drevicki across the line were Biasi, Unglert, Ryan Quackenbush and Carmen Perigo.

Unlike last week when the Sportsman feature ran non-stop, this Friday saw the USS Achey Open Sportsman vs the Savage 61 602’s run a caution filled event. The Reber’s Blake and Tyler were on the front row and would get the race started with multiple yellows permeating the action early on. Lap seven saw the race director make the call to go single file restarts the remainder of the way. Back to the race, Brandon Edgar would take the lead early on and go on to lead the rest of the way as they battled behind him. Jim Houseworth, Tim Fitzpatrick, Mike Burrows and Wayne Witmer were the top five. The highest finishing 602 Crate would be Shon Elk who finished ninth.

The Red White and Blue Autos Roadrunners completed the night’s events with unfortunately another caution filled race. Seth Reichert would lead lap one of the 20-lap race, Reichert would give way to Mat Ney on a lap one restart with eighth place starter Chris Holland taking the top spot away on a lap three restart. Holland would continue to lead the race until the No. 992 of Terry Kramer started to apply pressure for the lead. Kramer and Holland would race side by side until a yellow once again put a stop to the action. Kramer would go onto to takeover the top spot on the restart and lead the remaining laps to take the win. Chris Holland would finish second with Eric Schofstall, TJ Fitzpatrick and Jim Kost completing the top five.

Thank you to all our great sponsors and fans who put up the extra money for all of the great bonuses offered tonight in all divisions.

Did Not Start – Kyle Wingle