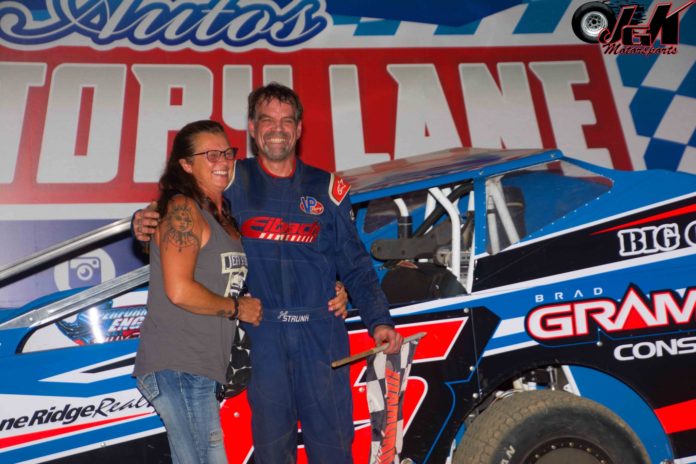 MINERSVILLE, PA – After a week off courtesy of Mother Nature, Big Diamond Speedway sprang back into action Friday night as part of Insigner Performance night with the crowd-pleasing twin 20’s for the Insigner Performance Modifieds. At the end of the night it was Matt Stangle and Jeff Strunk standing in victory lane with each taking a win. It was Joey Vaccaro taking the win in the Savage 61 Crate 602 division, Brad Brightbill was the first repeat winner this season in the USS Achey Sportsman division as was Chris Holland in the Red White and Blue Autos Roadrunners.

The first modified twin twenty saw Craig Whitmoyer and Frank Yankowski lead the field to the green flag with Whitmoyer jumping to the lead. Matt Stangle went by Yankowski for second on lap six. Whitmoyer was still the leader as he had pulled out to a lengthy advantage in the early stages. Whitmoyer looked to have this race in hand early but suddenly slowed and pulled off the track as he came off of turn four heading for the halfway flags. Stangle assumed the lead and started to stretch his advantage over Yankowski. While Stangle was leading the way Mike Gular and Rick Laubach were charging through the pack and started to pressure Yankowski fo the runner-up spot. Laubach vaulted past Gular into third on lap 14 and four laps later moved by Yankowski for second. Laubach was flying and caught up to the just turned 21 y/o Stangle as the field took the white flag. Stangle held his line down on the low side of the track and held off the challenge of Laubach to take his first ever modified win at Big Diamond. Frank Yankowski, Gular and Billy Pauch Jr completed the top five.

“The track was definitely a lot slicker than I thought it would be but we had a good car and it feels great to finally get a win,” cited an excited Stangle. “I don’t know if I would’ve been able to catch (Craig) Whitmoyer but sometimes it’s better to be lucky than good I guess. I really want to thank all of my sponsors and my parents for everything they do for me to be able to race.”

First twin 20 feature winner Matt Stangle pulled the number twelve ball out of the pouch meaning the top twelve finishers from the race would invert for the second twin 20. This put Kevin Graver Jr and Nick Rochinski on the front row. Graver would take the lead at the start and lead lap one with Rochinski working by Graver to lead lap two. Sixth place starting Craig Von Dohren was charging early and took over the third spot on lap three and one lap later moving by Graver to take over the runner-up spot. The first yellow of the race came out on lap five when the No. 98 of Tim Apgar slowed. The following restart was chaotic as the fourth-place runner Brett Kressley bounced off the wall coming down the frontstretch and getting into a car underneath him. At this time cars started bouncing off each other heading into turn one with the end result being a 13-car accident causing major damage to some cars with others being able to drive away, pit for repairs and return. Fortunately, there were no injuries, just a lot of bent up cars and frustrated drivers.

Back to racing and Von Dohren powered around Rochinski to take over the top spot, the race was slowed by another yellow when a strong running Kevin Graver slowed. Von Dohren once again raced to the lead as now Rochinski was having to hold off the challenges of Jeff Strunk who was once again aboard the Butch Getz No. 15s. Strunk worked his way past Rochinski for second on lap 12 and started to reel in the leader Von Dohren. Strunk was making up ground quickly on the low side as Von Dohren was using the high line. Lap 17 saw Strunk pull even with Von Dohren coming off turn four with Von Dohren able to hold Strunk off coming down the front and into turn one. Von Dohren wanting to protect his lead immediately moved his line to the inside as the two veteran stars raced into turn three. Strunk knew what he had to do and moved to the outside and powered around the No. 88x of Von Dohren to take the lead on lap 18. Once in front Strunk went on to take his first win at Big Diamond since April 17, 2017. For Strunk it was also his 50th career small block win at the track.


“I almost forgot where victory lane was here, it’s been so long since we’ve won here,” said a very happy Strunk. “It was great hearing the great crowd reaction here tonight, it was a good run for us. I can’t say enough about everyone who supports me and is behind me starting with Laurie my girlfriend. Thanks to Butch Getz who let me run this car here a few weeks ago and to Glenn and Bonita (Hyneman) for all of their support, it’s a team effort from everybody. This is a good deal for us and it keeps me here racing and I just can’t thank them all enough.”

The Savage 61 Crate 602 Sportsman were back in action this Friday with Kevin Brady in the No. OINK car taking the lead from his pole position as second-place started Joey Vaccaro was pressuring Brady for the lead. Vaccaro took over the top spot on lap 4. A major pile-up on a lap 8 restart shuffled the field up front. On the restart, it was Vaccaro still leading the way with Shon Elk and Dakota Kohler moving into the second and third positions. The top three cars ran the remainder of the race nose to tail with Vaccaro able to hold off the duo to record his first ever win. Elk finished second with Kohler in third. Mark Clauss and Beau Drobot completed the top five.

The USS Achey Sportsman division got off to a rocky start when eventual winner Brad Brightbill and Tim Fitzpatrick got together on the start causing both to spin. However, the start had already been called off and both cars were allowed to pit and return to their original starting positions. Mike Schneck took the lead on the start with Fitzpatrick applying pressure. A lap five restart saw Fitzpatrick take over the top spot with Brightbill getting by Scheck on lap six for second. Another restart on lap eight saw Brightbill power around the outside of Fitzpatrick to take over the top spot. Once in front it was all Brightbill as he moved out to comfortable lead and was able to take the checkered flag for the second time this season. Brandon Edgar got by Fitzpatrick late in the race to take second with Fitzpatrick coming home third. Mike Burrows and Cole Stangle rounded out the top five.

The Red White and Blue Autos Roadrunners put on another exciting race for the fans. Shawn Mulhall took the lead on lap one with Kris Ney right on his bumper in second. Mike Reichert joined the battle as the three leaders raced under a blanket. A lap twelve restart saw the leaders Mulhall and Mike Reichert hook together with both cars spinning putting both at the rear. Mike Reichert took over the lead with Chris Holland and Chris Reichert second and third. Kevin Holland added his name to the list as he moved into contention. As the leaders were going into turn three, they all got together with Chris Holland emerging as the new leader. As the wreck was being cleaned up, track officials decided to go with a green checkered finish due to time restraints. Chris Holland held on to take the win over Jim Kost, Alex Schoffstall, Terry Kramer and Jesse Krasnitsky.