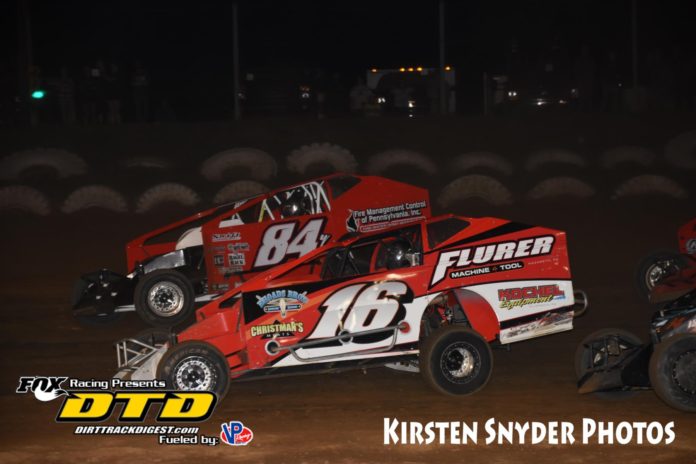 MINERSVILLE, PA –  Friday night racing at Big Diamond Speedway has been highly competitive all season long especially in the Insigner Performance Modified division with thrilling races every Friday night. However, last’s night modified feature is going to be hard one to top.

Jordan Henn, Brett Kressley and young Alex Yankowski put on a show for the ages over the last five laps racing amongst each other. The three drivers battled hard and clean with the highlight of the race coming as the trio came across the start/finish line to take the white flag three abreast. At the end of it all, it was Alex Yankowsk who turned 16 y/o just one day who stole the show to take his first ever Modified win at the speedway. Other winners on the night were Joel Smith in the Savage 61 Crate 602 Sportsman, Jim Kost in the Red White and Blue Autos Roadrunners, Kody Sites won the Hellers Gas Street Stocks and the Xcel 600 Modified feature went to Ty Hoke.

Jordan Henn and Dan Hineline brought the 24-car field to the green in the 25-lap Modified feature event with Henn taking control to lead lap one. The red flag was displayed after one lap was completed when Tim Apgar and Cory Merkel came together off turn four. Back to green flag racing with Henn maintaining his lead over a strong running Kris Graver who was now second after getting by Hineline. Jared Umbenhauer would bring out the yellow on lap six as he spun out between turns three and four.

Henn once again controlled the race on the restart with Graver in pursuit, Brett Kressley wanted into the mix as he was now up to the third spot as the final yellow of the night was displayed for Frank Yankowski. During the first seven laps, Alex Yankowski was quietly making his way to the front from his eleventh starting spot cracking the top five when the caution was put out.

Once again it was Henn leading the way as the race went back to green as Kressley was now pressuring Graver for second as A. Yankowski worked his way past Nick Rochinski for fourth. Lap 17 saw Kressley finally work his way past the strong running Graver with Yankowski getting by one lap later to take third. Both Kressley and Yankowski had their sights set on the leader Henn who was having his best Big Diamond race ever.

The last five laps of the feature will ones to be talked about for a long time. Henn, Kressley and Yankowski were nose to tail as they took the five to go signal from starter Jeff Merkel and from that point on it was magical as all three drivers raced alongside of each other hard but as clean as could be. It appeared that Yankowski had the car to beat but Henn and Kressley were not giving an inch. Yankowski made his move by Kressley for second and appeared to have the spot but Kressley charged hard on the outside to hold him off. Coming to the two to go signal it was still Henn with Yankowki edging by Kressley for second. The trio kept at it going down the back with Yankowski digging on the bottom to get by Henn as they entered turn three. Kressley not to be denied saw the middle open and put his No. 19K into the opening as they rocketed off turn four. It was a three abreast battle for the top spot as they took the white flag with Kressley scored as the leader. Heading off into turn on Kressley stayed high with Henn in the middle as Yankowksi hugged the bottom groove. Coming off turn two it was now Yankowski the new leader heading towards turn three. Henn gave it one more shot coming off turn four as he tried the inside but to no avail as Yankowski held on to take the heart stopping win over Henn and Kressley. A strong running Kris Graver was fourth with Mike Gular coming home in fifth.

Honestly, when I saw the checkered flag, I didn’t know we were that close or tight,” said a very happy and smiling Yankowski. “I said to myself ‘did I really just do that’. It was a very good night and I have to thank all my guys. I was just trying to bide my time early; I knew we had a good car tonight. The competition here is second to none and you have to really be on your game to get a win here.”

It was another new winner in 2020 in the Savage 61 Crate 602 division with Joel Smith taking the victory in the No. 555. Smith started on the pole took the lead at the start of the race. Smith managed to hold off all challengers through some early race cautions and raced to the win over Steve Lyle, Troy Conrad, Craig Cueno and Jonathan Swift. Points leader Cody Manmiller managed to come home with a 10th place finish to remain the frontrunner in the chase for the title.

Jon Schlaugh led the charge to the green flag in the 20-lap Red White and Blue Autos Roadrunner main event. A lap five restart saw Schlaugh get sideways in turn two losing spots on the racetrack as Shawn Mulhall takes over the lead. Jim Kost, Eric Schoffstall and Chris Holland are on the move as they battle behind the leader Mulhall. Lap ten sees Mulhall and Kost side by side for the lead with Kost taking over the top spot. Another caution on lap 15 resulted in the race exceeding the time limit with Kost taking the win over Chris Holland, Eric Schoffstall, Shawn Mulhall and Ronnie Suhr the top five.

In the Hellers Gas Street Stock division, Jeremy Becker takes the lead from the pole but Kody Sites who started in the fifth spot was on mission and by the time the first lap was scored had taken over the top spot. Sites held off a determined Ryan Smith throughout the middle portion of the race and go onto take the feature win. The strong running Smith broke on a lap 15 restart to end his day. Following Sites across the line were Jeff Haag, Johnny Palms, Jim Somers Jr and Jeremy Becker.

The Xcel 600 Modifieds made their first visit of the year to Big Diamond and it was Ty Hoke leading the way from his front row starting spot to take the win over Eric Whitby, Sam Sciccitano, Brian Blankenbiller & Kory Inglin

Did Not Qualify – Jim Bobbitt, Wayne Witmer and Shawn Light.

The Modified Consi Race was won by Kevin Beach Jr.

Did Not Start – Butch Heisel

Did Not Start – Trent Warner

The 600 Modified Heat Races were won by Korey Inglin and Ray Gradwell.