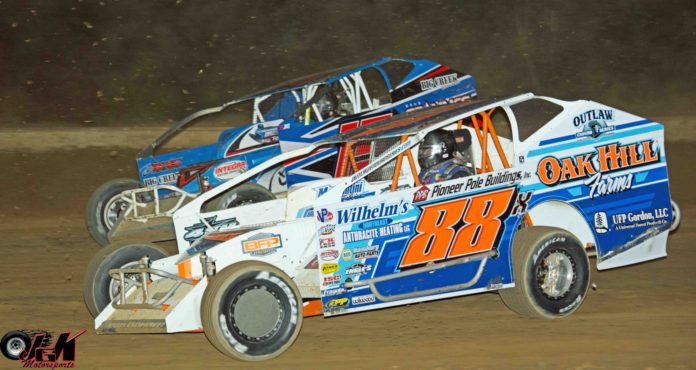 MINERSVILLE, PA – This Friday night August 7th, it will be a Pink Out at the Big Diamond Speedway. Everyone is encouraged to where something pink to show support for the victims of cancer along with those who are still fighting the dreaded disease.

It will also be the annual Fayash Memorial Night with extra money on the line for the Modifieds, Open Sportsman and the Crate 602 Sportsman divisions.

The Insigner Performance Modifieds will race a regular 25-lap feature event for a $3,000 first place prize. The modified division has been quite competitive with Alex Yankowski being the only driver to have multiple wins. The race for the 2020 points title is extremely close with only 17 points standing between the top three drivers of Jeff Strunk, Mike Gular and Craig Von Dohren as they battle for the coveted championship.

The USS Achey Open Sportsman along with the Savage 61 Crate 602 division will race separate 20-lap feature events with each feature event paying $1,157 to the winner. While Brad Brightbill has been the kingpin of the Open Sportsman division thus far in 2020, young Brandon Edgar will be looking to unseat the king and win his second feature of the year. The Savage 61 Crate division has been highly competitive this season with four different winners in four feature events. Can Cody Manmiller, Joey Vaccaro, Joel Smith or last week’s winner Danny Buccafusca be the first to double up or will we see another new winner is victory lane this Friday night?

*Both Sportsman divisions will be an open draw event with 200 show up points going to each driver.

Concluding this week’s action will be the return of the Hellers Gas Street Stocks who had the week off last week along with the highly entertaining Red White and Blue Autos Roadrunners.

Gates open on Friday at 5:30pm with warmups getting underway at 7:15pm. Racing will start at 7:45pm.

The event will be broadcast live on Dirt Track Digest TV.

General admission for this Friday night will be $20, Senior admission is $18. Kids 16 and under are FREE. Active military with a valid ID are free.