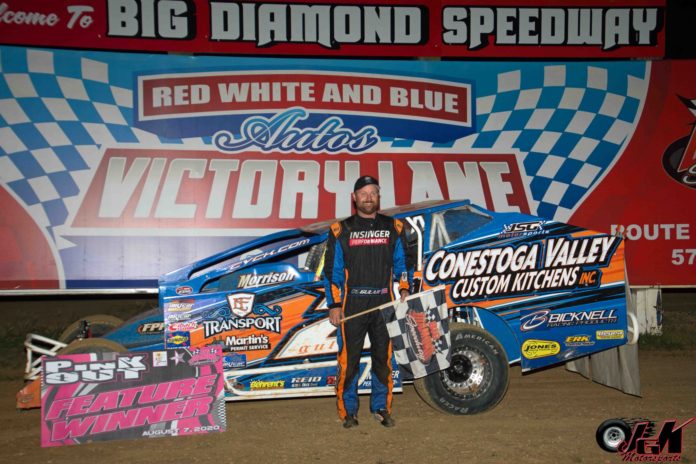 MINERSVILLE, PA –  Mike Gular was a man on a mission Friday night at the Big Diamond Speedway as he charged through the field from his 12th starting spot to win the 25-lap Insinger Performance Modified feature on Friday night as part of USS Achey / Fayash Memorial Night. Gular and his Terry Fastnacht owned No. 2A team took home a nice payday of $3000. Brandon Edgar held off a late challenge from Brad Brightbill to win the 20-lap USS Achey Sportsman feature. It was another new winner in victory lane on Friday in the Savage 61 Crate 602 class as Joe Toth won with a last lap pass of Sammy Martz Jr. TJ Fitzpatrick was the winner in the Red White and Blue Autos Roadrunner feature while Sam Sciccitano stood in victory lane in the Xcel 600 Mod class.

Ray Swinehart and Dan Hineline would lead the 24-car field to the green flag in the Insigner Performance modified feature event with Swinehart taking command. Kevin Beach would follow suit in second as the Swinehart started to open up his advantage. The first caution of the race would come out on lap seven when the leader Swinehart pulled to a stop in turn one handing over the lead to Beach.

Beach would lead the way on the restart with sixth place starter Jared Umbenhauer now up to second. Umbenhauer would-be all-over Beach for the lead and on lap nine made the move to the front to take over the top spot. Matt Stangle was on the move also and charged by Beach to take over the runnerup spot one lap later. While all this great action was going on upfront, 12th place starter Mike Gular was quickly charging to the front getting by Duane Howard for third. A lap 11 yellow for newcomer Dillon Steuer aboard the Zubi’s Racing No. 17Z slowed the action bringing the field back together.

Umbenhauer would continue to lead on the restart with Beach who had regained second place back from Stangle right behind. Howard made a great move on the restart to vault himself up to second getting by Beach, Stangle and Gular. Howard’s move didn’t faze Gular one bit as he was back by Howard two laps later to take over second. Lap 14 saw Doug Hendricks slow and bring out the yellow one more setting up a battle for the top spot between Umbenhauer and Gular. Umbenhauer would get the jump on Gular on the restart to remain in front as Billy Pauch Jr was starting to make his presence felt as he passed Howard for third. Gular continued to press Umbenhauer for the lead on and on lap 17 made the pass to take over the top spot. Gular pulled away to a comfortable lead and was heading to an easy victory when the yellow slowed his pace on lap 23 as Shawn Fitzpatrick slowed to a stop in turn four.

Gular picked the outside for the restart and got the jump on Umbenhauer to stay in the lead. However, another caution on lap 24 would make Gular have to do it over once again. The Boyertown, PA driver was not going to be denied on this night as he once again outgunned Umbenhauer on the restart to lead the last lap and take home the big $3000 win. Umbenhauer finished second with Craig Von Dohren making a late race charge to finish third. Pauch Jr and Brett Kressley finished fourth and fifth, respectively. Points leader Jeff Strunk had a right rear tire go flat on the last lap while running in the top five.


“This car was great here tonight,” said a very happy Gular in victory lane with track announcer Dino Oberto. “This is a different car then what we won with last time. I have to thank my car owner for giving me a good piece here. We are strong here and its fun. My guys work really hard in the shop and it’s a total team effort. It’s been a long time since I won multiple features in one season so it definitely feels good and I am glad Jake (track promoter Jake Smulley) decided to extend the season a little bit longer and I’ll run here to January if I can.”

In the 20-lap USS Achey Open Sportsman feature it was Ed Mrochko taking the lead at the start from his pole position as fourth place starter Brandon Edgar was marching to the front quickly. Edgar would take over the lead on lap three and set sail on the competition. Points leader Brad Brightbill was moving through the field at a rapid pace from his ninth starting spot taking over second on lap eleven. Brightbill was pounding the cushion hard as he looked to make up ground on the leader Edgar who by now was way out front. Lap after lap Brightbill would make gains on the leader and when the white flag was waving Brightbill was there pressuring Edgar for the top spot. Brightbill stalked Edgar through turns one and two and as the lead duo went into the final set of turns Brightbill made a last-ditch effort on the outside and almost pulled it off. But Edgar was able to hold off Brightbill to take home the huge win and the $1157 first place prize. Chuck Eckert, Tim Fitzpatrick and Matt Clay rounded out the top five.

The start of the 20-lap Savage 61 Crate 602 Sportsman feature was delayed as the lights around the speedway went dark. After a quick fix, the starting field was ready to go. Kevin Brady would lead the first lap from the front row with third place starter Joe Toth taking over the top spot on lap two. First time Big Diamond visitor Sammy Martz Jr raced to second after starting fourth. A mid-race caution was the break Martz Jr needed as he was able to take the lead on the restart. Martz was able to put some distance between himself and Toth as the laps clicked. Toth was not giving up and started to reel the leader back in. With the white flag waving Toth was on the back bumper of Martz as the raced down the front stretch. Martz charged into turn one on the low side as Toth drove it in on the high side, Toth made the outside work as he charged around Martz to take over the top spot and go on to take the hard earned win. After Toth and Martz, it was Johnathan Swift, Ryan Conrad and Kevin Brady the top five.

TJ Fitzpatrick would take the lead from outside pole-sitter Alex Ditzler on lap three and go onto lead the remaining 17 laps to win his first feature event of the season in the Red White and Blue Autos Roadrunner division. The race came down to a three-way battle between Fitzpatrick, Alex Schoffstall and Ronny Suhr Jr. The three drivers raced nose to tail for the final ten laps of the race with Fitzpatrick holding serve the entire way to take the win. Fitzpatrick, Schoffstall, Suhr Jr, Jim Kost and Chris Holland were the top five finishers.

The Modified Consi Race was won by Cory Merkel.

Did Not Start – Mike Schneck

The Open Sportsman Heat Races were won by Chuck Eckert and Brandon Edgar.

Did Not Start – Corey Sechrist