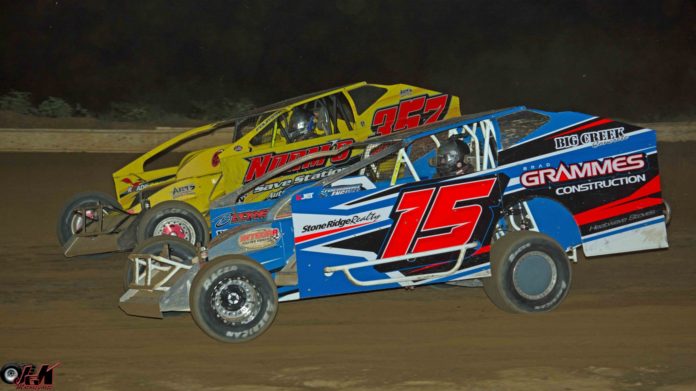 MINERSVILLE, PA – If last nights Prelude to the Coalcracker was a preview of what we can expect to see at the Jack Rich, Inc. Coalcracker 72 in two weeks, then prepare yourself folks it is going to be a GREAT one. Jeff Strunk came from starting 13th to win his second feature of the season aboard the Butch Getz No. 15S after a scintillating battle with Billy Pauch Jr in the Insigner Performance Modifeds 40-lap feature race. For the second week in a row Brendan Edgar held off Brad Brightbill for the win in the USS Achey Open Sportsman feature. Alex Schoffstall and Ryan Smith both won their first features of the year in the Red White and Blue Autos Roadrunners and the Hellers Gas Street Stocks.

Ray Swinehart and Cory Merkel led the field to the green flag in the 40-lap Prelude to the Coalcracker feature event with Swinehart jumping to the front to lead lap one. Duane Howard who had started fourth wasted no time working his way to the front and quickly moved into second and by lap four Howard was your new leader. Shawn Fitzpatrick brought out the first yellow as he spun in turn four.

The ensuing restart would find the No. 101 of Kris Graver who was running fourth at the time spin in turn two causing the field to scatter but to no avail as multiple cars found themselves involved including the current points leader Mike Gular and two-time winner Alex Yankowski. Also involved were Craig Von Dohren, invader Dillon Steuer and others. Gular and Von Dohren made quick pits stops and were able to rejoin the field.

Back to racing and Howard takes off and starts to open up an advantage over Swinehart as Billy Pauch Jr was now up to third after starting ninth. Doug Hendricks went off the track on the backstretch to bring out another yellow. When the race resumed Pauch was now up to second and started to chase down the high-flying Howard. Brett Kressley and Jeff Strunk started to show their speed as they moved into third and fourth. Howard was still your leader at the halfway flags with a small but safe lead over Pauch, Kressley, Strunk and Umbenhauer.

Lap 25 saw Strunk move by Kressley and into third as he looked to move in on the leaders. A lap 29 yellow for Ray Swinehart would prove to be the pivotal part of the race. Howard choose the outside on the restart with Pauch on the bottom. As they charged off of turn four, Pauch was able to keep even with Howard as the two charged into turn one side by side. Howard tried to stave off the move by Pauch but as the pair entered turn one Pauch forced his way by the No. 357 of Howard to take over the top spot. Howard got a little loose as they entered turn two allowing Strunk to scoot by on the inside to take over the runner-up spot. Pauch found himself running the top side as Strunk was working the extreme lower groove as the pair raced for the lead.


Strunk was persistent on the inside and would be able to get by Pauch coming off the turns but Pauch would regain the lead on the outside as they entered the turns. Lap after lap two of the most talented wheelman at Big Diamond battled hard and clean for the top spot. A yellow on the lap three interrupted the classic battle with Strunk being the leader. On the restart the battle resumed as Strunk kept working the inside line to perfection coming off the turns to stay in the lead. Two more yellows on lap 36 and 38 would again slow the action but Strunk was not going to be denied on this night as each restart he would be able to hold Pauch and charge under the checkered flag for the big $4000 win. Points leader Mike Gular and Craig Von Dohren charged from the back of the pack after the lap eight incident to finish a strong third and fourth with early leader Howard finishing fifth.

“That was a hell of a race there between me and Junior (Billy Pauch Jr),” said an elated Strunk in victory lane after his big win. “We got lucky there a couple of time especially being able to get through that wreck over there in turn two. I tried the top there in the middle of the race but always felt better down on the bottom. I always feel good on the bottom here. Hat’s off to Jake (track promoter Jake Smulley) for giving us a good track to race on like he has every week. Thank you, fans, for coming out and supporting us, we have a great crowd here tonight and we love you for that! I can’t thank Butch Getz, his family and Brad Grammes for giving us this car to race when we were down and out here with the No. 126 but I can’t forget to thank Glen (Hyneman) and Bonita also because they are a big part of this for letting us use their truck and trailer, supplies and their race shop to keep the car there and I just can’t thank them all enough for keeping me racing every week.”

The USS Achey Sportsman division has come down to a two man race each week between Brandon Edgar and Brad Brightbill. For the second week in a row, it was Edgar holding off his rival for the win. Pole sitter Marc Berzowksi brought the field to the green flag, but it was third place starter Ken Eckert leading lap one. Edgar was on the gas early and was up to third on lap three. Eckert and Edgar waged a side by side race for the lead with Brightbill right behind the leaders. Edgar would take over the top spot on lap eight with Brightbill going by Eckert as well. Brightbill stayed glued to the back of the No. 57 of Edgar just waiting for the young driver to make a mistake that never happened as Edgar raced under the checkered flag taking the win for the second Friday in a row over Brightbill. Eckert, Coles Stangle and Mke Schneck rounded out the top five.

The Hellers Gas Street Stocks made their return to the track after a few weeks off and the drivers were ready to race. Jason Geesaman jumped to the early lead and usually when Geesaman gets the lead he is gone but, on this night,, Ryan Smith had other ideas. Smith moved into the second spot early on and immediately closed in on the leader Geesaman. Smith kept working the inside of Geesaman and finally on lap 18 made it stick as he took over the top spot and went on to take the win. Geesaman, Kody Sites, Jeff Haag and Kyle Saylor completed the top five finishers.

After coming close on multiple occasions, Alex Schoffstall was finally able to take his first ever win in the Red White and Blue Autos Roadrunner feature race. Ronny Suhr Jr would lead lap one with Matt Ney in second. Schoffstall was quickly up to third. The top three put on a show for the fans as they raced hard and clean. Lap eight saw Ney go by for the lead with Schoffstall moving into second. Schoffstall wasted no time getting by the leader Ney and on lap 10 was scored the new leader of the race. Schoffstall would go on to take the win over a fast closing TJ Fitzpatrick, Ney, Kevin Holland and Jim Kost.

The Modified Consi Race was won by Andy Burkhart.

The Open Sportsman Heat Races were won by Cole Stangle and Chuck Eckert.

The Street Stock Heat Race was won by Jasen Geesaman.