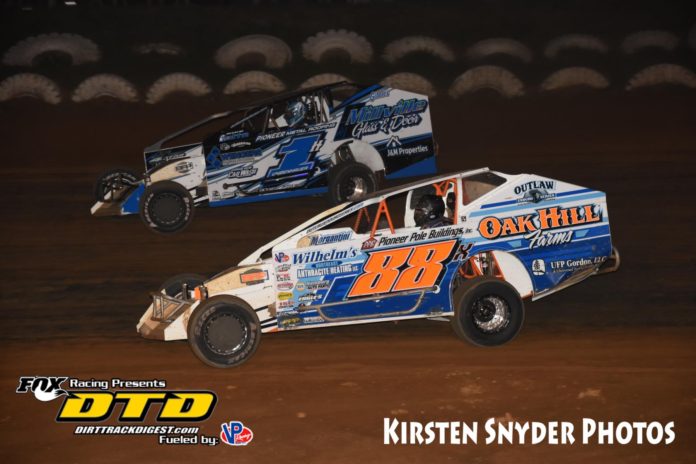 MINERSVILLE, PA – After losing last Friday’s racing card to weather, all eyes will turn to this Friday Sept 4th and Sunday Sept 6th as Big Diamond promoters Jake and Jasmine Smulley present the annual Coalcracker weekend which will culminate with the running of the Jack Rich, Inc. Coalcracker 72 for the Insigner Performance Modifieds. Just as it was in 2019, this year’s Coalcracker 72 will see the winner of this classic race take home a nice $17,000 payday. Last year’s race was a thriller as Craig Von Dohron held off the hard charging Brett Kressley for the win.

But before we get to Sunday’s main event, the USS Achey Open Sportsman will headline the opening portion of the weekend on Friday night as they race in a 40-lap main event paying $1600 to the winner. The Open Sportsman division has run a total of seven races in 2020 with Brad Brightbill and Brandon Edgar winning three features apiece. The only other driver to win a feature this season was Glenn Rowan. Look for the Brightbill / Edgar show to continue as they race for supremacy in 2020. This show will be an open draw with 200 show-up points awarded to each competitor.

Also, on the card for Friday night will be the Red White and Blue Autos Roadrunners, the Hellers Gas Street Stocks and the Central PA Legends. There will also be Modified practice session for teams looking to dial their cars in for Sunday’s Coalcracker 72.

Gates open on Friday at 5:30pm with racing getting underway at 7:45pm.

General admission for Friday is $15, Seniors are $13. Kids 16 & under are free along with active military (must have valid ID).

Once the Friday racing card is completed, it is time for the race the Big Diamond faithful look forward to all year. The richest race of the season, the Granddaddy of them all, it’s time for the Jack Rich, Inc Coalcracker 72.

The Coalcracker 72 has a deep tradition at the Schuylkill County dirt oval dating back to 1980 with a winners list featuring some of the greatest drivers ever to get behind of the wheel of a dirt Modified at the speedway.

With the prospect of no other tracks racing next Sunday, the entry list for this years Jack Rich, Inc. Coalcracker 72 should resemble a who’s who of modified racing. Former Coalcracker winner and arguably the best driver in the northeast Matt Sheppard has committed to racing this Sunday. Former Super Dirt Winner “Lightning” Larry Wight will also make the drive south to drive a car from the Brett Kressley stable. Other outsiders expected to make the tow and chase the big bucks this Sunday are local favorite Ryan Watt, Mike Mahaney, Tyler Dippel, Anthony Perrego, Lance Willix, Jack Lehner and a host of others.

When the outsiders show up on Sunday, they will have their hands full with the Big Diamond regulars who want nothing more that to keep that $17,000 in-house. Mike Gular, Jeff Strunk, Craig Von Dohren, Alex Yankowski, Jared Umbenhauer, Timmy Buckwalter and Matt Stangle have all registered feature wins this season and with the exception of Buckwalter who is injured and out for the season these drivers will be out to defend their home turf on Sunday. The 16-year-old Yankowski has been hot as of late registering two wins at the speedway and put on quite a show in last years Coalcracker before suffering a flat tire. If Yankowski could pull off the win, he would become the youngest driver ever to win the Coalcracker.

Former Big Diamond champion Billy Pauch Jr has been coming on of late and would love nothing better than to add a Coalcracker win to his already lengthy resume. Ryan Godown who is also a former champion at the speedway will be back this Sunday to add to his Coalcracker win total of three. Godown who was not a regular this season is always a force to be reckoned with at Big Diamond. Another former track champion Rick Laubach driving the Dick Biever No. 14 this season has struggled much of the season and is looking for a strong run on Sunday. 2018 surprise Coalcracker winner Danny Bouc will also be in the field as he looks for win number two in the classic event.

Filling out the racing card on Sunday will be the Savage 61 Crate 602 Sportsman who will race in the Fritz Roehrig Memorial, a 30-lap feature event with the winner receiving $1500. The Crate 602 division has been highly competitive all season long with no repeat winners. The Crate 602 race will be a draw event offering 200 show-up points to each competitor. The Red White and Blue Autos Roadrunners will make their second appearance of the weekend on Sunday and completing the card will be the Xcel 600 Modifieds.

Pit gates open on Sunday at 2:00pm with the Grandstands gates opening at 3:00pm. Hot laps are scheduled for 7:15pm with racing getting underway at 7:45pm.

** Entry forms for the Sportsman Coalcracker 40, the Fritz Roehrig Memorial Crate Sportsman 30 and the Jack Rich, Inc. Coalcracker 72 can be found on the Big Diamond Speedway website. www.bigdspeedway.net