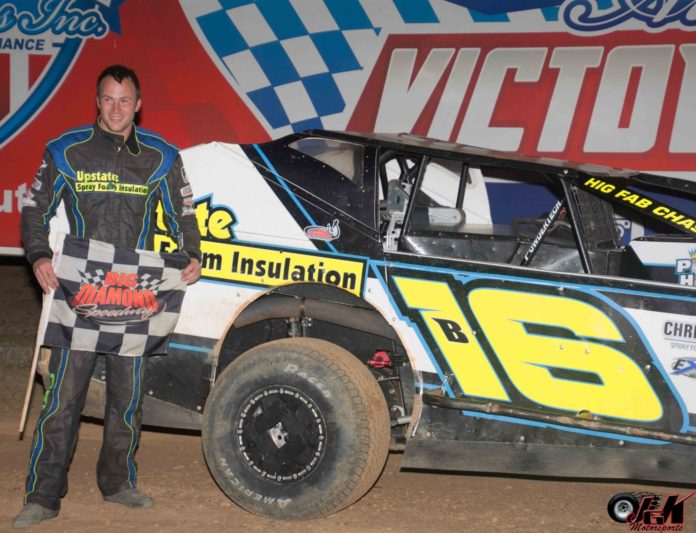 Alan Barker and Dan Hineline would bring the field down to the green flag to start the 25-lap main event with Barker jumping out to the lead. Barker who showed speed in his heat race had his Hig-Fab chassis car motoring on this night as he quickly pulled away from the field. Barker continued to stretch his lead as the field battle behind him. Loudon Reimert worked his way past Hineline for second on lap 10 but was not able to match the high-flying pace of the leader Barker.

With the crossed flags waving, it was Barker with a commanding lead over Reimert, Hineline, points leader Mike Gular who was making his way through the field after starting in the tenth position and Duane Howard. Barker continued to lead the way as Gular was marching through the top five getting by Hineline on lap 14 for third. Gular was on a mission at this point getting past Reimert for second on lap 22. Unfortunately for Gular, Barker was long gone at this point and although Gular did manage to cut into Barker’s lead, it was to no avail as the checkered flag waved in the non-stop 25-lap race with Barker taking the crowd pleasing win and the $4,000 first-place prize. Gular continued his streak of strong runs finishing second. Riemert had his best finish of the season in third with Howard and Craig Von Dohren completing the top five.

“We decided to come down here and race this summer with everything being shutdown in New York,” said an excited Barker after his big win. “I want to thank everyone here at Big Diamond. This place has some die-hard racers and fans and this is just awesome. Every week I would head home with my head down thinking man these guys are tough and the harder I tried, the slower I go. Tonight we made some changes on it and it was good in hot laps almost too good so we didn’t know what to do and it was good again in the heat race so we just left it alone. I was glad to see it go green to checkered, I know I would had a lot of hungry dogs on my back bumper if a caution would’ve come out and I don’t know if I could’ve held them off. Thanks to everyone for having me here.”

The 20-lap Savage 61 Crate feature saw polesitter Joel Smith get out front early and set the pace. The first yellow flag came out on lap seven with Tyler Peet up to second already after starting tenth. The return to green was short lived as the yellow lights were on again after lap eight was in the books. On this restart, Peet was able to make his move as he went past Smith to takeover the top spot. Peet continued to lead with a terrific battle going on behind him between Smith, Dakota Kohler and Jonathan Swift. Peet would go on to take his first ever Big Diamond win and the $661 first-place prize over Kohler, Swift, Smith and Steve Lyle.

The big question entering the 20-lap USS Achey Open Sportsman feature was could anyone beat the dynamic duo of Brad Brightbill and Brandon Edgar. With the exception of one race, Brightbill and Edgar have won every feature so far in 2020. Mike Toth would take the lead from the front row with Marc Berzowski coming from fourth to pressure Toth for the lead. Cole Stangle and Brandon Edgar were on the move early and looking to join in the fun up front. As the field approaches the midway point of the race, disaster strikes for leader Berzowski as he runs into the spinning car of Jeremy Hertzog ending his race and handing the lead back to Toth. While field is under caution Edgar heads to the pits with a flat tire.

When the race resumed, Stangle gets by Toth to takeover the top spot with invader Jack Butler starting to show his presence at the front of the field. Butler gets by Toth for second and starts to pressure the teenager Stangle for the top spot. The final laps of the race were a barn burner with Stangle running high and Butler down on the low side battling side by side for the lead. Butler made a last-ditch effort in turn one on the last lap but the 14 y/o Stangle never flinched and held off the veteran Butler to take his first ever feature win. Butler finished second with Brad Brightbill putting on a late race charge to finish third. Toth and Steve Young were the top five.

The Red White and Blue Autos Roadrunner saw Seth Reichert take the lead on lap one and holds off a late race challenge from points leader Alex Schoffstall to take his first ever win at the speedway. Following Reichert and Schoffstall across the line were Chris Holland, Matt Ney and Jim Kost.

Tyler Lucas was the winner of the Enduro 50 lap feature.

Did Not Start – Craig Whitmoyer

The Modified Heat Races were won by Alan Barker and Duane Howard.

The 602 Crate Heat Races were won by Joel Smith and Kevin Brady.

Did Not Start – Joey Vaccaro

Did Not Start – Ronny Suhr Jr