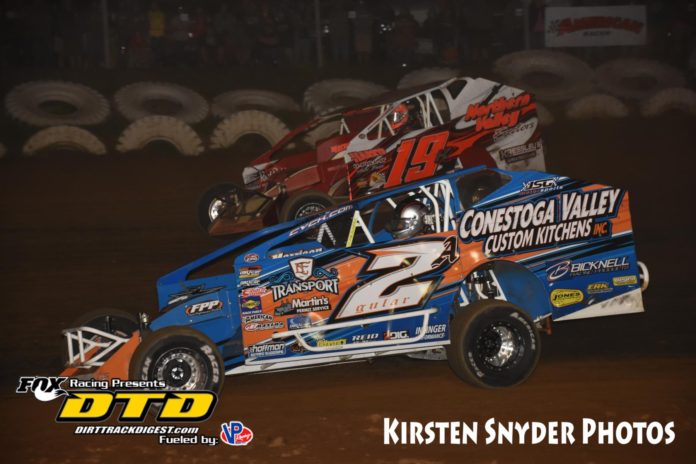 MINERSVILLE, PA – It all comes down to this Friday night to crown a champion in the Insigner Performance Modified division. One race, three drivers vying for the right to call themselves the 2020 Big Diamond Speedway point champion. Mike Gular, Craig Von Dohren & Jeff Strunk all have a shot at the title this Friday with promoters Jake & Jasmine Smulley offering another big payday for the Insigner Performance Modifieds with a winner’s share of $4,000 going to winner of the 25-lap feature event.

Mike Gular is the current points leader with a 98-point advantage over second place and defending champion Craig Von Dohren. Gular who has two wins so far in 2020 has been a model of consistency rarely finishing out of the top five in 2020. Von Dohren with only one win so far in 2020 has been consistent as well and will be ready to snatch the title away from Gular should Gular run into any issues. Jeff Strunk sits in third place and would need both Gular and Von Dohren to have disastrous nights for him to have a shot at winning the championship.

The USS Achey Open Sportsman division is back in action with Brad Brightbill leading the way with a chance to clinch his first ever Big Diamond title this Friday night in their 20-lap main event. Brandon Edgar sits in second 188 points behind Brightbill with only two races remaining.

In the Savage 61 Crate 602 division, there are no less than 10 drivers still in contention for the 2020 points title with Ryan Conrad currently leading the way in the race for the title. This division title race will go down to the last lap of the last race to determine the champion.

Note: If either sportsman division has 25 or more cars, the winners share in that particular division will jump to $1,000.

Gates will open this Friday at 5:30pm with warmups hitting the track at 7:00pm. Racing will begin at 7:30pm.

General admission for Friday October 2nd is $20. Senior admission is $18. Kids 16 and under will be admitted free. Active military with valid ID are free.

If you cannot make it to the track, all the action will be available via pay-per-view on www.dirttrackdigest.tv

Look for an upcoming announcement shortly on the Diamond Nationals taking place on October 9th & 10th.

For more information on the 2020 season, please visit the Big Diamond Speedway website at www.bigdspeedway.net