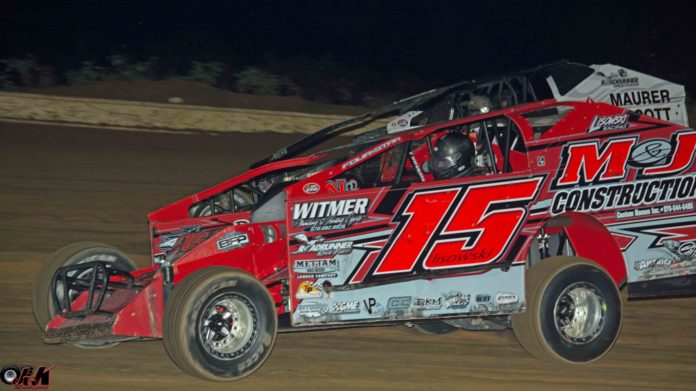 MINERSVILLE, PA – It was a cool, clear crisp night up in the mountains Friday night as the Big Diamond Speedway presented week number two of the their extended fall season and just like last Friday we saw a new winner in victory lane in the Insigner Performance Modifeid division. Mike Lisowski took advantage of Craig Whitmoyer’s misfortune to take the 25-lap $4,000 to win feature event. Friday night was also the last week of points for the Modifieds and it was Mike Gular winning his first ever Big Diamond Points title. Brandon Edgar was the winner of the USS Achey Open Sportsman feature with Steve Lyle the victor in the Savage 61 Crates. Chris Holland was winner of the Red White and Blue Autos Roadrunner feature as Alex Schoffstall was crowned champion.

Mike Lisowski and Craig Whitmoyer brought the 24-car to green in the Insigner Performance Modified feature with Lisowski to front. Matt Stangle slowed in turn two to bring out the first yellow before the lap can be scored forcing a compete restart. Lisowski gets the jump on Whitmoyer to lead lap one. Dillon Steuer slows to bring out the second caution on lap one. Back to green and Howard slows after contact with Alex Yankowski bringing out yet another yellow. On this restart it is Whitmoyer who takes over the top spot with Lisowski in second.

Whitmoyer starts to extend his advantage over Lisowski as Yankowski and Strunk start to work their way to the front taking over spots three and four. Strunk moves his way past Yankowski for third on lap five. Whitmoyer and Lisowski have checked out on the field at this point as Strunk starts to try and chase down the leaders. At the halfway mark it is still Whitmoyer leading Lisowski by a comfortable margin with Strunk, Yankowsk and Ryan Krachun the top five.

The last yellow of the race would be displayed on lap 13 when invader Jim Britt slows. On the restart, Whitmoyer who is having a great race continues to lead the way as Lisowski tries to hold back the advances of Strunk and Yankowski. The top three spread out as Whitmoyer leads by a comfortable margin looking for his first ever modified win. Unfortunately for Whitmoyer disaster strikes with the white flag in sight as the No. 99 slows through turns three and four allowing Lisowski to take over the lead. Lisowski go on to take his first every modified win with Strunk, A Yankowksi, Krachun and Whitmoyer completing the top five.

“That really sucked for Craig (Whitmoyer), you never want to win this way,” cited an obviously happy Lisowski in victory lane. “We’ve had such a bad year with motors and everything and we weren’t even planning on running the rest of the year but we got a fresh motor back and we were excited to go back and try it again hoping to get some momentum going for next year. It’s been one of those years and even with it being a short season, it’s been a long season and I have to thank my parents for what they do for me. There has been a lot of long nights and hard nights, working to three in the morning to put a new engine in and this makes it all worth it.”

In his first full season at Big Diamond, Mike Gular was crowned the 2020 points champion. Gular who finished the season with two wins and was a model of consistency rarely finishing out of the top five. Finishing seventh in tonight’s feature, Gular knew he didn’t have the car to win but knew what he had to do to secure the championship.

“Our car was a little off tonight, and I didn’t want to push the issue too much after that second turn incident,” explained Gular as he accepted his championship trophy in victory lane. “We had a great season here. We had a lot of good runs and I am glad we came up here to Big Diamond this year and it paid off. The competition is very tough here at Big Diamond. Championships are won in the shop and I have to give hats off to my car owner (Terry Fasnacht) for giving us what we need to win all year and to all my guys who work their asses off in the shop to make this championship happen.”

The 20-lap USS Achey Open Sportsman feature saw Matt Clay take the lead on lap one as the caution waves. On the restart it was Wayne Wittmer taking over the top spot after starting sixth. Witmer continues to lead as Brandon Edgar moves into second and is starting to run down the leader Witmer. With five laps to go, Edgar is now on Witmer’s back bumper. Edgar makes his move as he goes to the outside in turns three and four to takeover the top spot. Once in front it was all Edgar as he goes onto win his fourth of the season over Witmer, Clay, Tim Fitzpatrick and Ray Woodall.

Joey Vaccaro takes the lead to start the Savage 61 Crate 602 20-lap main event. Vaccaro continues to show the way as the first caution waves on lap six as former Big Diamond modified racer Steve Lyle has moved into second after starting seventh. Vaccaro is still your leader as Lyle starts to close in on the leader. As the leader’s approach five to go, Lyle is throwing everything he has at Vaccaro but to no avail as Vaccaro still leads the way. The yellow flag waves with one lap to go setting up a one lap shootout for the win. Vaccaro seems to have a left front tire going down at this point as he tries to hold off Lyle. On the restart Lyle throws it in up top on the cushion in turns one and two and slides past Vaccaro coming out of turn two to take the lead and the win. Vaccaro holds on for second with Tyler Peet, Cory Edelman and Cody Manmiller the top five.

The always exciting Red White and Blue Autos Roadrunners division feature saw Ronny Suhr take the lead at the start as fourth place starter Chris Holland was quickly on his bumper. After a lap four restart it was a four-car battle for the lead between Suhr, Holland, Alex Schoffstall and Matt Ney. Suhr and Holland are side by side for the lead with Holland taking over the top spot on lap nine. Holland goes on to take the win with Suhr, Schoffstall, Seth Reichert and Kevin Holland. With his third-place finish Alex Schoffstall is your 2020 Red White and Blue Autos Roadrunner points champion.

Geoffrey Sutton was the winner of the Xcel 600 modified feature over Riley Hummell.

Did Not Start – Scott Albert and Gary Grim.

Did Not Start – Kris Graver

Did Not Start – Jeremy Hertzog and Daryl Dissinger.

The Open Sportsman Heat Races were won by Jeremy Hertzog and Steve Young.

The 602 Crate Heat Races were won by Joey Vaccaro and Doug Manmiller.

Did Not Start – Jon Schlauch

Did Not Start – Jason Mills

The 600 Modified Heat Race was won by Ray Gradwell.