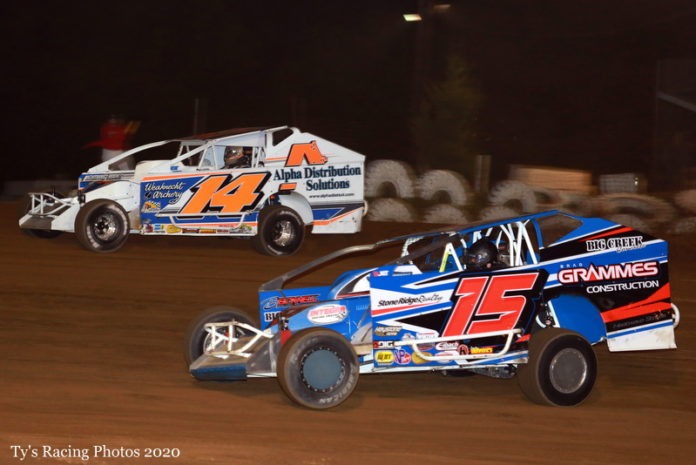 MINERSVILLE, PA –  It was a very successful return for night one of the 2020 Diamond Nationals sponsored by Red White and Blue Autos at Big Diamond Speedway. It has been at least 10 years since the last time the Diamond Nationals have been run here at the speedway and last night saw great fields of cars in all divisions.

The Insigner Performance 358 Modifieds main event saw Jeff Strunk take his third checkered flag of the season. The USAC Wingless Sprint cars ran a pair of twenty lap feature events with Alex Bright and Kenny Miller III splitting the mains. The Limited Late Models made their 2020 season debut with Andrew Yoder charging to the win. The Hellers Street Stock division made their final appearance of 2020 with Kody Sites taking the win and championship.

Jeff Strunk and Rick Laubach led the 24-car field to green in the 30-lap Insigner Performance Modified feature with Laubach outgunning Strunk on the start to take the lead on lap one. Strunk who has been strong every week in the Butch Getz owned No. 15 worked his way past Laubach to retake the lead on the bottom coming out of turn four. The only caution of the race was thrown on lap five as Jim Britt spun to the infield in front of the starters stand.

Back to green and Strunk motored away from Laubach as Ryan Krachun was making a charge towards the front. Krachun worked his way past Matt Stangle and Dillon Steuer to take over third. Strunk was long gone at this point and stretched his lead to almost a straightaway over Laubach. Strunk ran into lapped traffic on lap 19 but it did not slow him down at all as he easily sped to the $4,000 win Laubach had his best finish of the year coming home in second Steuer was able to get back by Krachun for third after Krachun almost spun after getting caught with a lapped car. Krachun ended up fourth with 2020 track champion Mike Gular rounding out the top five.

“We got lucky tonight with Butchie’s (owner Butch Getz) daughter Dana drawing the pole for us,” cited a happy Strunk in victory lane. “That was a huge help to start out front tonight, the first lap I wasn’t sure what we had. The car seemed a little tight, but I think we just needed to get some heat in the right front tire. The car worked really good tonight after that, and I can’t thank Butch and his family enough for this. The lapped cars were good tonight and didn’t race me once they saw me. We’ve had a good season here, that flat tire we had a few weeks ago sort of took as out of the points race but I have to say congratulations to Mike (Gular) and their team on their championship, they have been fast all year and deserved it. Thanks to fans for coming out to support the track and hopefully we can get another victory tomorrow night.”

The first of the Rapid Tire USAC wingless sprint twin 20’s saw Chris Allen taking the lead at the start with Carmen Perigo doing the chasing. Allen continued to lead the way as the pair worked their way through lapped traffic. Allen seemed to have the race in hand and heading to the win when Ryan Watt hopped a wheel and went flipping heading into turn three to bring out the red flag. Watt’s Tim Hogue owned No. 39 ended up way outside the track causing a lengthy red as the crews worked to recover the car. Thankfully, Watt was okay with the exception of a sore arm. Unfortunately, the same could not be said of the car which was destroyed. When the race resumed Alex Bright was able to get by Perigo for second and one lap later went by Allen to take the lead and the win over Allen, Perigo, Bill Unglert and Steven Drevicki.

The second twin 20 saw Christian Bruno take the lead with Kenny Miller III taking over the top spot on lap three. 2020 points champion Steven Drevicki was on the move early on as he worked his way towards the front. A caution on lap eight would bunch up the field with Miller staying in the lead on the restart. Drevicki is on the move flying around the outside as he moves into second. The closing laps of the race saw Miller III and Drevicki battling for the lead with Drevicki pulling out all the stops but to no avail as Miller III hangs on to take the win. Drevicki, Alex Yankowski, Alex Bright and Bruno complete the top five.

The Limited Late Model feature saw Andrew Yoder charge past Chase Billet to take the lead around the outside on lap 13 and despite a couple of restarts that closed up the field went to take the win over Billet, Devon Hart, Ben Whitaker and Troy Miller.

The Hellers Gas Street Stock feature event saw Ryan Smith to the lead on lap one with fifth place starter Kody Sites taking over the top spot on lap 2 Sites would go on to lead the remainder of the race to take the win over Smith and Butch Heisel.

The Modified Consi Race was won by Doug Hendricks.

Did Not Start – Craig Whitmoyer

The USAC East Coast B-Main was won by Jacob Balliet.

Did Not Start – Jakob Piper, Matt Murphy and Tommy Slanker.