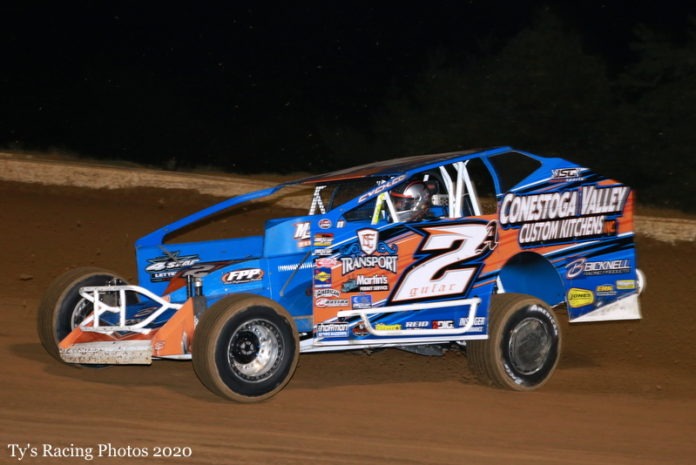 MINERSVILLE, PA – A short but very successful season has come to a close at the Big Diamond Speedway Saturday night with the running of day #2 of the Diamond Nationals. It was only fitting that this years Insigner Performance Modified champion Mike Gular was the winner of the 40-lap big block/small block challenge taking home a check worth $5,000. Brad Brightbill was the winner of the USS Achey Open Sportsman feature with Tyler Peet becoming the first driver in 2020 to become a two-time winner in the Savage 61 Crate Sportsman Division. The Red White and Blue Autos Roadrunners four crazy eight’s features were won by Seth Reicher, Alex Schoffstall (2) and Jim Kost.

The Insigner Performance Modified feature race saw Ryan Krachun and Tyler Dippel bring the field to the green flag with Dippel able to move to the front of the pack and lead lap one with Krachun right behind. The first and only caution flag was displayed on lap nine when the No. 33S of Skylar Sherriff slowed with Dippel leading Krachun, Mike Gular, Sammy Martz and Brett Tonkin. Back to green and Dippel continued to lead the way as Krachun was all over him for the top spot with Gular lurking right behind the front duo. Halfway and it was still Dippel leading Krachun, Gular, Martz and Jimmy Horton.

While the top three cars were running under a blanket for the lead, twelfth place starter Frank Cozze was making his way toward the front as he got under Horton to move into the top five. With ten laps to go it was still Dippel leading the way as Gular made his move for second getting by Krachun on the outside after Krachun looked to have just clipped the yuke tire between turns one and two and having to lift out of gas just a little. After getting by Krachun, Gular was relentless as he pressured Dipple for the lead. With seven laps to go, Dippel could do nothing to hold back the onslaught of Gular as he streaked by to take the lead. Krachun also got by Dippel for second and hung with Gular for a couple of laps but once Gular cleared lapped traffic, he was able to put a safe distance between himself and Krachun. Gular streaked under starter Jeff Merkel’s checkered flag to take his third victory of the season at Big Diamond capping off an outstanding year at the speedway. Krachun finished second with Cozze getting by Dippel to finish third. Dippel held on fourth with Alex Yankowski completing the top five.

“The guys worked hard here all year and to cap off the season like this is great,” said a jubilant Gular after his big win last night. “We were a little off last night and I think we have something wrong with that car and I have to give one my guys Harry credit because he saw something wrong with this car earlier today and that might’ve helped a lot but I have to give all my guys credit Jeremy, Trevor, Bob, John and Brandon. I need to thank my family, my sponsors and my wife so I don’t get yelled at later (laughingly) and of course I need to thank my owner Terry (Fasnacht) for giving us everything we need to be successful.”

“I didn’t know where to go, both those guys were running strong and I was just trying to follow and see where I could gain on them and where I couldn’t gain on them and then when I got the opportunity on them I made the move, I didn’t want to take a chance of not being able to do so. We had a great year here this year and I am looking forward to next year and I know that Strunky (Jeff Strunk) said that if he wouldn’t have got a flat one of the night’s a few weeks ago that he would’ve gave us a run for the championship so come on back next year because it’s on. Tonight, was a hard race and I am whooped.”

The finale of the season for the USS Achey Open Sportsman saw Kyle Lillick take the lead on lap one with Brad Brightbill jumping into the second spot after starting third. Lillick continued to lead the way with Brightbill hounding his every move. Brightbill who has made his living this season at Big Diamond running around the bottom knew that he was going to have to go outside of his comfort zone on this night as Lillick continued to stay low preventing Brightbill from making a move. Lap 18 and Brightbill went for broke as he charged the outside in turns one and two, the No. 19 stuck and Brightbill was able to drive around Lillick to take the lead and the win to put an exclamation point on his season after clinching the Open Sportsman Championship earlier. Lillick finished second with Wayne Witmer, Jack Butler and Mike Burrows the top five.

Steve Lyle would take the lead in the Savage 61 Crate 602 Sportsman season ending feature race with Sammy Martz Jr getting second after starting third. Yellow slowed the race on lap three and on the restart, Martz Jr took over the lead with a good restart. While Martz continued to lead the way, the No. 12T of Tyler Peet was working his way through the field and after getting by Lyle for second started to put pressure on Martz for the top spot. Peet make his move down low for the lead on lap 13 and takes over the top spot from Martz. Once in front Peet puts some distance between himself and Martz to go on and become the first driver in 2020 to get multiple wins in the crate division. A late race charge by Michael White found him finishing second while early leader Martz Jr was third. A big congratulation to Cody Manmiller who was the first ever Crate 602 Sportsman Champion at Big Diamond Speedway.

On behalf of the speedway owners and promoters Jake and Jasmine Smulley, I would like to thank Insigner Performance Race Fuels (Modifieds), USS Achey, Inc (Open Sportsman), Savage 61 (Crate Sportsman), Red White and Blue Autos (Roadrunners) and Hellers Gas (Street Stocks) for sponsoring their respective divisions in 2020. Thank you to all of our other sponsors throughout the year especially Fire Management and Control for all of their great support over the season. Thank you to DirtTrackDigest.tv for being a partner and broadcasting our races throughout the season. Also, a huge shoutout to all of our teams, drivers and especially the fans for making 2020 a season to remember for many reasons. We cannot wait to see you all back again in 2021!

The Modified Heat Races were won by Jeff Strunk and Brett Tonkin.

Did Not Start – Brandon Edgar

The Open Sportsman Heat Races were won by Wayne Witmer and Brad Brightbill.

Did Not Start – Don Murphy and TJ Fitzpatrick