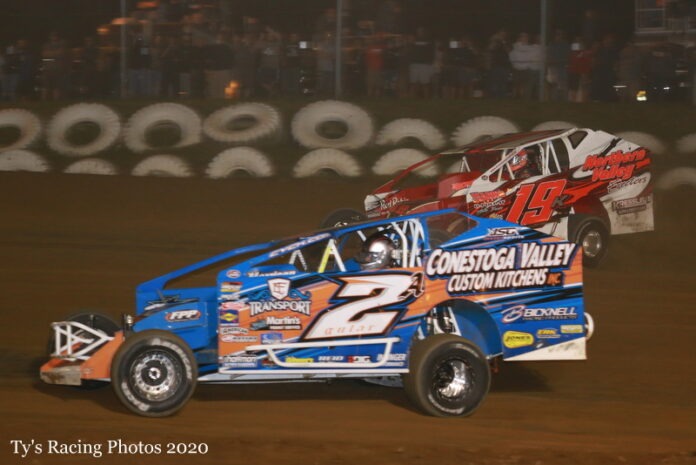 MINERSVILLE, PA – With 2020 behind us, Jake and Jasmine Smulley are looking forward to 2021 with a schedule that includes racing for both modified and open wheel fans alike. Despite the late start last season, it was a banner year for Big Diamond Speedway and the future looks bright at the Schuylkill County dirt oval.

Once again, the mighty Insigner Performance 358 modifieds will headline the season at Big Diamond Speedway. Friday night’s at Big Diamond have always featured some of the best competition around and this season will no exception as the level of competition in 2021 will be like none other. Highlights this season for the modifieds include opening night April 2nd with a big $4,000 to win race followed up the next week on Friday April 9th with the annual “Money in the Mountains” paying $5,000. The Brett Deyo led STSS makes their annual visit on Tuesday June 8th for the “Anthracite Assault”. Friday July 2nd will be the yearly “Georgie Stevenson” Memorial race paying $4,000 and Friday August 20th will be the “Prelude to the Coalcracker” race which will pay a whopping $10,000 to the winner this season. As always, the season will conclude on Sunday September 5th when the annual “Jack Rich Inc. Coalcracker 72” takes place paying a cool sum of $17,000 to the winner.

The lightning fast winged 410 Sprint Cars will make a return to the speedway after a seven-year absence. The 410’s have run a total of nine races at Big Diamond with the late great Greg Hodnett leading the way with five victories. Single race wins have gone to Keith Kauffman, Lucas Wolfe, Brian Montieth and Sam Hafertepe who won the last time they were there in 2013.

There will be plenty more action in 2021 at the speedway if you are an open wheel fan. On April 23rd, the Amsoil National USAC Sprint cars return to Big Diamond Speedway as part of their “Eastern Storm” swing. The month of May will showcase the open wheel cars with three consecutive Fridays of action starting on Friday May 14th as the ARDC Midgets make their return to the speedway. The following Friday May 21st finds the first of two appearances for the URC Sprint cars with the growing USAC Wingless Sprints appearing the very next Friday May 28th. The URC Sprints will return on Friday June 25th as will the ARDC Midgets with the USAC Wingless Sprints returning the following Friday July 2nd. The ARDC Midgets make their third and final appearance at the track on Friday July 30th. Also, this season the PASS/MASS Sprints will make two trips to the speedway on Friday June 11th and Friday July 23rd.

The always popular ULMS Super Late Models make a return to the speedway on Friday May 7th with a $3,000 to win main event. After a rousing return to Big Diamond Speedway last season as part of the Diamond Nationals the Limited Late Models will make three appearances in 2021 starting on Friday June 18th and returning on July 16th as part of “Topless Night” and then again on Friday September 3rd as the Coalcracker weekend gets underway.

Just like in 2020, both the USS Achey Open Sportsman and the Savage 61 602 Sportsman will return to race in 2021 in separate divisions along with the exciting Red White and Blue Autos Roadrunner division. There will be many special races provided for all three divisions throughout the year culminating with the Coalcracker weekend which will pay $1,200 to win in the Open Sportsman division on Friday Sept.3rd and $1,500 to win for the 602 Sportsman on Sunday Sept. 5th which will pay $1,200 to the winner. Friday August 27th will be a big night for the Roadrunners as they take part in a series of match races which are always fun for the drivers.

Friday, May 14th: ARDC Midgets, Sportsman, 602 Sportsman, Roadrunners & Blast from the Past Vintage.

Once again, dirttrackdigest.tv will partner with Big Diamond Speedway to bring you the action from the speedway via PPV if you cannot make it to the track.

2021 Media Credential applications will be available on the website and must be filled out completely and either mailed or emailed to the address listed on the website.